Welcome to an ongoing inquiry about the behavior of people and dogs.
Blog Home >> Animals and the People Who Love Them >> What is a “Hard Eye” in a Dog? (And What Should You Do When You See One?)

Little Nell, a fox-faced Border Collie, came to visit the farm over twenty-five years ago, when I was just getting started as a behaviorist. A sweetheart of a dog, she melted when petted and came when I called, eyes shining, radiating joy and exuberance. However, one day she didn’t respond when I called her. Her face was buried in the tall grass by the driveway and I could hear her snuffling at something under her nose. As I got closer, she turned her head toward me, and… I froze. I didn’t even know why at the time, it seemed to happen automatically, and too fast to consciously evaluate. And then I realized  that Nell’s eyes had gone “hard,” a look that people had been telling me about, but I had never seen.

“Watch out for it,” trainers and behaviorists with more experience than I had at the time had told me. “But what does a ‘hard eye’ look like?” I’d ask. “How will I know it when I see it?” When Nell came to visit I had just finished my degree in Zoology, and had been well trained in the importance of detailed and accurate observations. “What changes when an eye “goes hard” I’d ask? “What should I look for? Does the color change? The pupils constrict?”

“No, it’s not about the color or the pupil dilation or constriction,” they all said (although pupils changes can be important).  Everyone could tell me what is wasn’t, but not what it was. All anyone could say was “Their eyes go cold” or “You’ll know it when you see it.”

And I did, when Nell’s eyes turned icy and my body told me to stop reaching toward her. Since then, decades later, I’ve seen it far too many times, from dogs as large as ponies and as small as squirrels. I know now, too, why it’s so hard to describe. I’ve thought about this for years, and the only thing I can compare it to is one of those hyper-edited photographs, the kind you see in some magazines in which the”color saturation” and “resolution” was set on high, so that what you see doesn’t look quite real anymore. To me, those kind of photographs don’t look appealing, they look flat and strange, like some alien whose semi-human form looks chilling precisely because he is human-like, but then, isn’t.

The look is as hard to capture in a photograph as it is to describe. The dog below, a lovely little girl named Fly, is staring intently at Willie at the moment, the better to play “you move and I’ll smash into you! Won’t that be fun!” Her eyes have something of the quality of a “hard eye,” but not because she is challenging anyone, but because her stare is so intense. 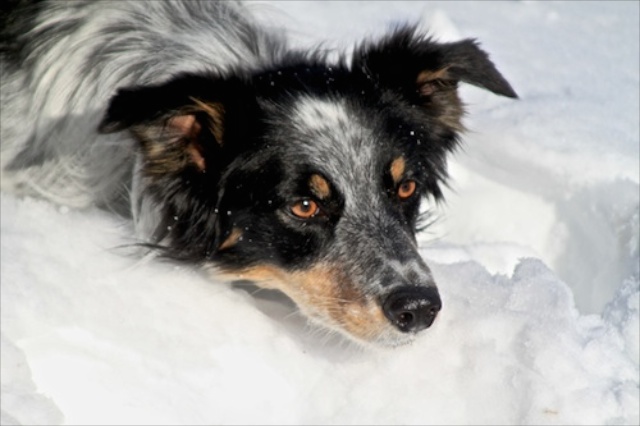 I’ve looked at other photographs in books under the “hard eye” description (Handelman’s excellent Canine Behavior: A Photo Illustrated Handbook, for example), and none quite captures what you actually see in person. Handelman states that hard eyes are “squinty,” but I haven’t found that always to be true. Nor do I think the pupils always constrict. Actually, I think the only accurate description is that the eyes “go cold.” But how do eyes “go cold?” My major professor, Jeff Baylis, speculated that eyes go “hard” when the sympathetic nervous system engages and the eyes momentarily stop their usual “nystagmus.” Not the large, lateral movements associated with vestibular disease, but the microscopically small side-to-side movements that the eyes of all mammals do to help locate objects in front of them. This seems to be the best explanation I’ve heard so far.

Whatever causes them, “hard eyes” can be signs of trouble.  Big trouble. (And not just in dogs. Ever see it in a person? Scary.) Most trainers and behaviorists associate the look with the potential of aggression. I see it as a clear threat: “Continue doing what you are doing and there will be consequences.” In a few rare cases,  I suspect the message is “Make my day.”

How should we respond to a dog whose eyes have gone hard? Don’t faint, but I am not going to say “It Depends.” At one level, the answer is simple: “Change what you are doing.” If you are reaching toward an object that the dog is guarding, stop reaching. If you are trying to enter the house of friend who is on vacation and whose dog needs to be taken outside to potty, throw treats behind the dog before entering the house. Of course, exactly what you do next depends on many things–is it your dog, or someone else’s? When did it happen, and do you know why? After little Nell’s eye went hard over a treasure in the grass, I began conditioning her to enjoy it when I reached for something she wanted by associating it with food more wonderful than what she was guarding. (See here for information on treating resource guarding.) Willie’s eyes went hard on me once, just once, when I was toweling off his back legs. He was an adolescent, still fearful of other dogs, and highly reactive to noises, but a sweetheart to me. But when he was about 10 months old, I began toweling his butt and he turned his head to look at me as his eyes went a little hard and he growled, ever so quietly, under his breath. Because I knew him so well, my reaction was to laugh at him. “Oh Willie, don’t be silly, Willie-silly-billie-boy.” I did pause for a moment, then I teased him, and went right back to rubbing him down. That was the end of it. But I did change my behavior, even if briefly, and if there’s one thing that I think is important to do if a dog flashes you “the look,” it’s that. Change what you are doing.

Needless to say, I’ve seen a lot of dog’s eyes go hard over the years. I’ve had the dogs of some clients turn to face me and knew instantly–or, at least, believed,  that they were clearly communicating that I had a choice: Continue doing what I was doing and get bitten, or change my behavior and avoid stitches. BUT, and this is an important qualifier, it is essential not to ignore the behavior. Any time a dog’s eyes go hard, it is important to note the context, and speculate about why the dog was threatening you.  Was it over a treasure? Then begin treatment for resource guarding. Was it about  a reach toward the head by a stranger? Then immediately implement both a safety-based management plan and treatment with classical and operant conditioning.

That’s been my strategy. 1) Change behavior in the moment. 2) Reflect on context, see if you can find a pattern and then a) manage to avoid it while b) using good conditioning exercises to take away the motivation. What about you?  Have you ever seen a dog’s eyes go hard? (I think this doesn’t happen at all in most pet dogs. I guarantee you that some dog’s eyes simply never go hard. I wish we had some research on how often it really happens, in what context, and by what kind of dog.) If you have, how did you react? I look forward to hearing what you have to say.

MEANWHILE, back on the farm. It’s been so hot that I’m not working the dogs much on the sheep, just enough to move them from the barn to thei

r pasture each day, then back down again in the late evening. I have been doing lots of gardening, which includes about an hour a day of picking Japanese beetles off of my plants and dropping them into soapy water. As much as I dislike the creatures, I have to admit I’ve enjoyed learning about them.

During the afternoon hours they seem to break into committee meetings, and I’ll find 10 or 20 on the same leaf, all the better to push them off into my awaiting bowl of soapy water. Willie and Maggie follow me around for a few minutes, and then decide whatever I’m doing is boring, and go off to entertain themselves. Often they’ll lie down in the shade and watch me. I do wonder what they are thinking!

Here are some of the plants I’m trying to protect. They make me happy every day, beetles or not. 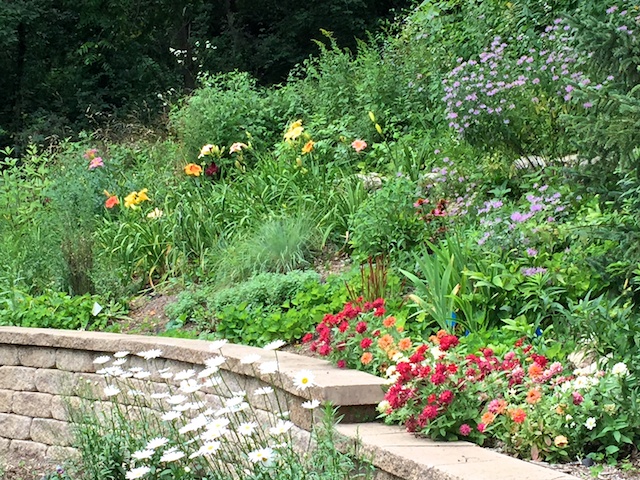