Welcome to an ongoing inquiry about the behavior of people and dogs.
Blog Home >> Animals and the People Who Love Them >> What is This Dog Telling Us?

Here’s a question for you, related to my talk (“Lost in Translation”) at the Vashon Art Center on Vashon Island this coming Saturday. It’s all part of the Vashon Island Championship Sheepdog Trial that Jim and I will be attending on Friday, Saturday and Sunday.

What does this dog’s face tell us, if anything, about 1) His internal state and 2) His next behavior? A point I’ll make in more depth at the talk is that those are two very different things, although of course they are related. 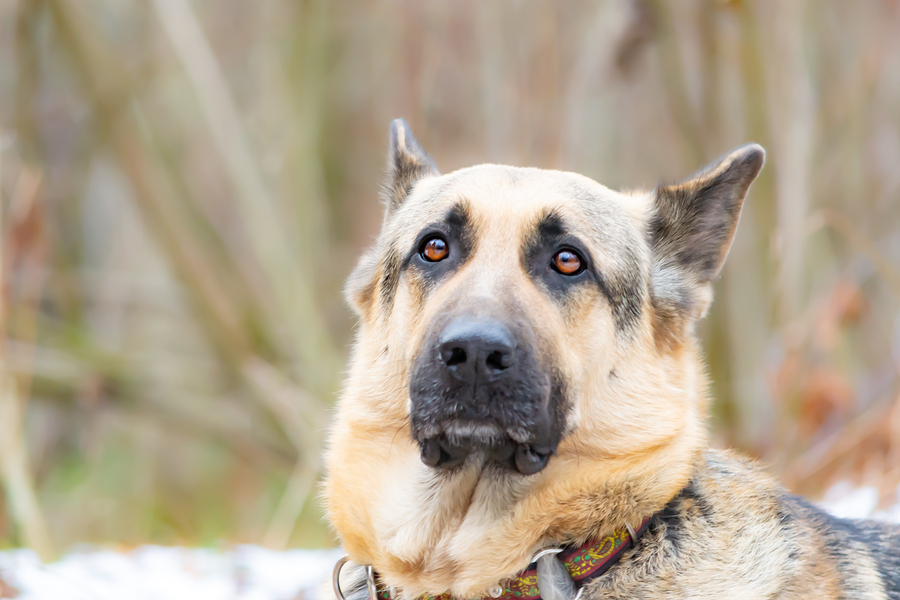 I’ll read your answers with great interest and respond as much as I can in between speechifying, packing, etc etc. Full disclosure, I had planned to post on a different topic today, but the article needs several more hours of work and I need to spend more time on my talk on Vashon Island. I take it very seriously when people expend their time and money to listen to me, and I want to focus as much attention on my talk as I can between packing and the rest of life.

MEANWHILE, back on the farm: I admittedly made the next few days busier by going to a sheepdog trial in Woodstock, Illinois where Maggie and I had some of our worst runs, ever. But we also had some victories, so I’m hanging on to that. First off, the trial was in a very small field bordered by a busy road (which we had all been warned about, so it wasn’t a surprise).  Small fields can make it easier, since the sheep and dog are always much closer to the handler, but can also make it trickier, because there is so much pressure between where the sheep are held to be set out for each run (the set out pens), and where they get to go after a run (the exhaust pens). Sheep are drawn to these pens like iron fillings to a magnet, because there’s safety in numbers. If the sheep are fast movers rather than slow and “heavy” ones, and a large group of sheep are close by because of a small field, it puts tremendous pressure on the dog to manage them. These sheep, a wonderful bunch of healthy, responsive Barbados crosses, were lovely to work IF your dog stayed far back off of them and used finesse rather than pressure to move them. If not, they ran like deer and your dog didn’t have a chance in hell to stop them.

On a big field these would be Maggie’s favorite kind of sheep, but on Saturday she first ran to the sheep in the set out pen, and on Sunday to the exhaust pen instead of the three sheep standing at the back of the field. On Saturday I’m guessing that she saw the sheep in the set out pen looking right at her on her outrun and honestly thought she needed to deal with them too. I finally got her redirected onto the right sheep but by then her brain was a bit fried, and she boggled the drive so badly I just left the post and retired. She was truly over her head at that point and there was no point at continuing when her brain was clearly frazzled.

On Sunday I sent her in the other direction so she wouldn’t be running directly at the sheep in the set out pens, but surprise surprise, she ran directly to the sheep to our right in the exhaust pens. Hmmmmm. The pens were completely covered, and she knew that the sheep were there, but she couldn’t see them and she’s never made that mistake in the past. I was sure she’d seen the sheep being set out for her on the other side of the field. I’m of course just speculating (speaking of guessing what’s going on in a dog’s mind, the theme for today), but my best guess is that she choose to go to the “easy” sheep, being intimidated by the difficulty of dealing with sheep in such challenging circumstances.

Our victory was that after finally leaving the pen and doing a good outrun on the right sheep, she did a fantastic drive, one of her best ones ever. She only got 22/30 points even though her lines were about perfect, because the judge faulted her for letting the sheep stop several times rather than moving at a continuous pace. That’s on me, cuz I lay her down rather than doing what I should have (asking her to slow down, not lie down). But I’m forgiving myself for that cuz, again, the sheep were like deer and one wrong move and you’d lose them.

One worry: Maggie seemed to be running at 2/3 her normal speed, which has been true for the last few weeks. Physical or mental? As I write, Jim, bless him, is taking her to the vets for a blood draw and a 4Dx test for tick-borne diseases. Cross your paws, I’m feeling a bit neurotic about her health, having just about lost it last Friday when I had to delete all references to Willie when updating the farm sitter instructions. Ah life.

So, some photos, and then, back to my speech!

Here’s an example of the reactive the sheep, which I think are the best kind because they are such a great test of a dog and handler. (Sorry, don’t know the name of the dog): 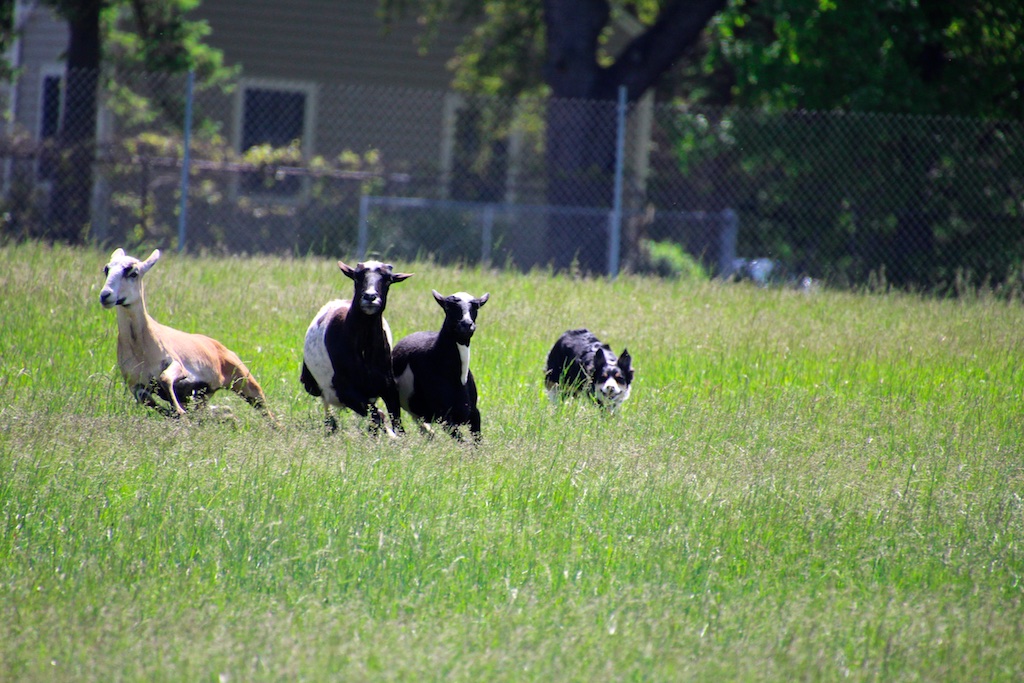 The trial was held at the Northern Illinois Sheep and Fiber Festival, as a fund raiser for the Land of Lincoln Border Collie Association. I had a lovely time with my friend Donna, a dedicated spinner and knitter, looking at some of the wool: 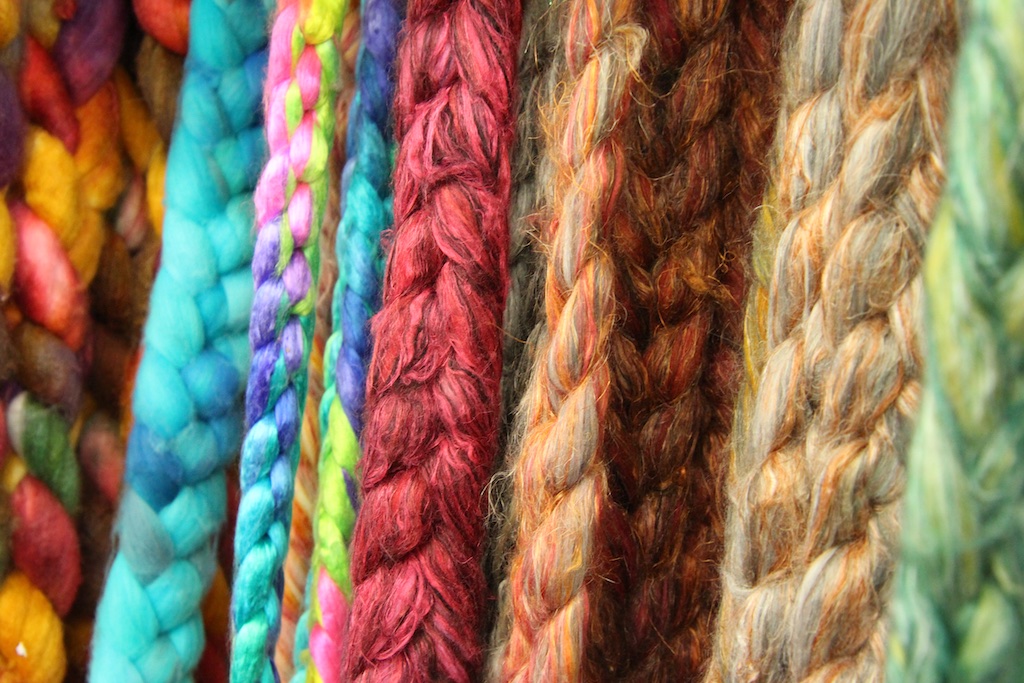 We got home Sunday evening to a truly beautiful garden (which is also yelling at me for attention). But it’s important to just enjoy it for awhile too, right? Here’s a Shooting Star amongst the Columbine: 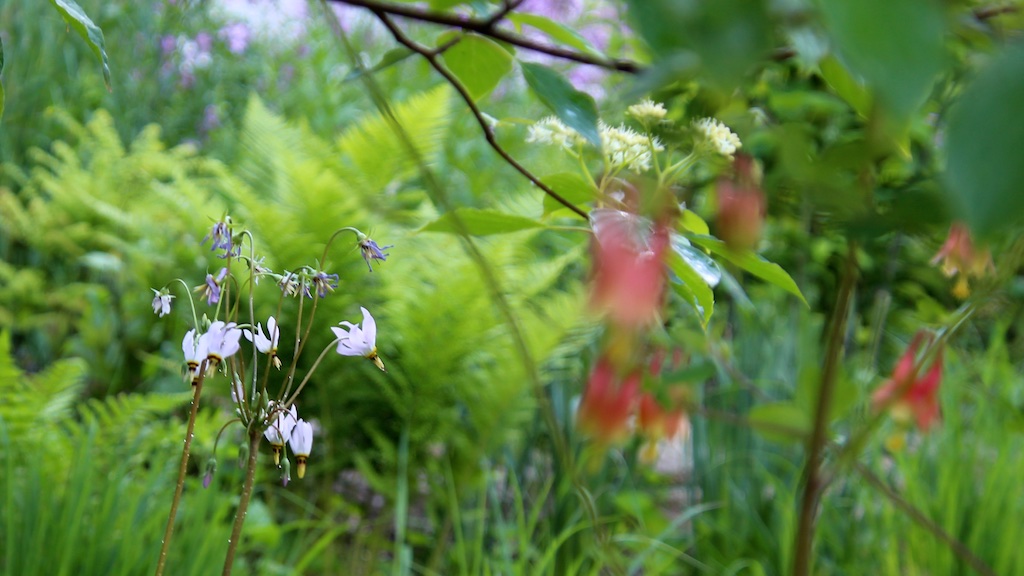 Ghost Kitty (aka Polly) posing with the posies: 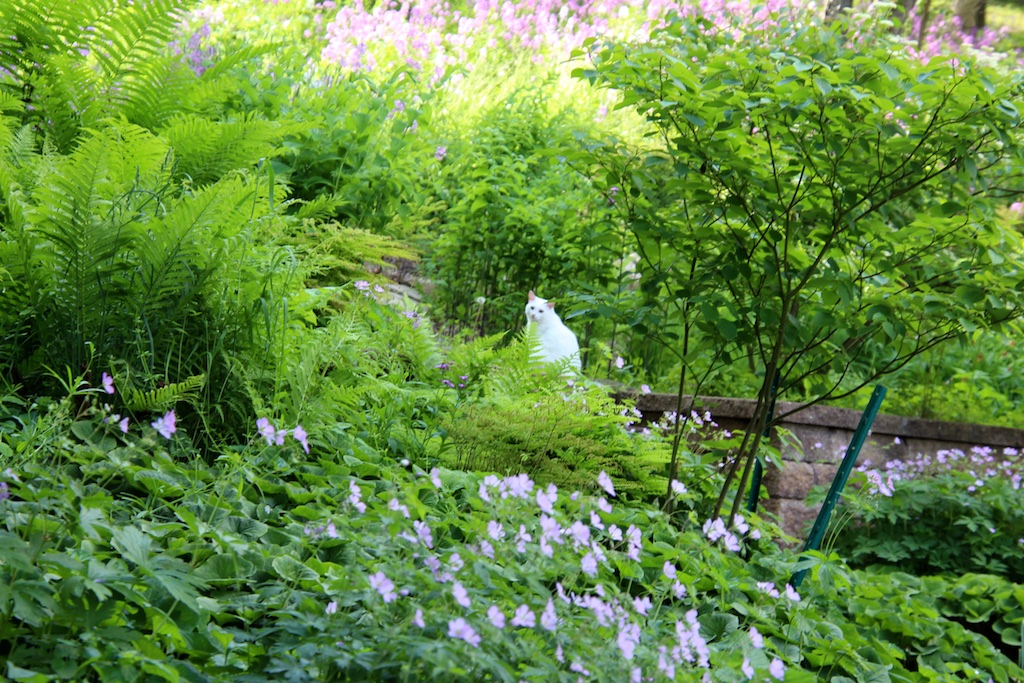 Okay, back to my talk! (But what information DO you think you can reliably get from that dog’s face at the beginning of the post? I’m so curious.)