Welcome to an ongoing inquiry about the behavior of people and dogs.
Blog Home >> Dog Behavior >> What Training Can Do, and What It Can’t

The PATRICIA McCONNELL RETURNS A PUPPY! brou-ha-ha (It’s almost been worth it just having an excuse to use that word: brou-ha-ha. Say it over and over and try not to laugh!) has brought up one of the most important questions in dog training. What “problem behaviors” can be ameliorated by training and/or management, and what can’t? Ah, the answer is a book unto itself (and yup, it’s going to be a topic of the book I’m about to start writing), so I can’t answer as fully as I’d like here. But here are some thoughts, that relate to my recent experience and to our relationship with dogs in general.

First, as many wise readers have noted, there is such a thing as temperament in dogs, just as there is in people.  Temperament is defined as a set of behavioral predispositions that are seen very early in life (within days of birth in infants), believed to be strongly influenced by genetics, and are relatively stable over time. (Personality, on the other hand, is the combination of an individual’s innate temperament and their experience–the interplay of ‘nature-nurture.’) In most mammalian species, there are some tendencies that are so strongly innate that they can be shaped but never completed turned around. Just as no one expects a blood hound to work a flock of sheep, no one expects a fearless, bold puppy to become a shrinking violet unless it was subjected to a major trauma.

Will is a great example of the tenacity of temperament: As a young pup he was pathologically afraid of unfamiliar dogs, the worst I’ve seen in over 20 years. He has come so far it makes my heart swell—he has lots of dog buddies, makes wonderful choices to keep himself out of trouble, and does extremely well in a variety of contexts. But he’ll never be a dog park dog and I’d never let 5 big male dogs run into the house and surprise him. He would be terrified. He was also one of the most sound-sensitive dogs I’ve ever seen. I couldn’t take him out and about because he didn’t habituate to environmental noises, he sensitized to them and became worse. (I know, I know, some of you are asking now: Why didn’t you take him back!!! The answer is complicated, but here’s the quick answer: he was so bad I truly believed he’d have to be euthanized if I didn’t do everything I could to turn him around. His name is “Will” because I asked “Will he or won’t he make it through his first year?” More on that in later blogs and the book to come.)

So, there are some innate traits that can be shaped and changed, but not eliminated. Many of them cause no problems at all in some contexts, but not in others. I’ll talk about context in a minute, but here are some (just some) of the behavioral predispositions that can be influenced, but rarely eliminated:

Dogs who want control: Call it “dominance” or “status seeking” or whatever you want, but some dogs seem to come out of the chute wanting to control objects, space and their own bodies. Just as some babies are cheerful and smiley, and others are inhibited and fearful (and continue to be as adults in their 20’s), some dogs seem hard-wired to want to control their environment. That’s often just not a problem, it can be dealt with easily enough with the right (positive) training methods and in the right context, but it can’t always be eliminated. (Ah, there’s that probability statement again!). And the contexts in which that predisposition most often leads to serious trouble are: 1) Two same sex dogs who are both controlling and 2) controlling/dominant/high status dogs in a home with very young children.

Dogs who are sound sensitive: This is again something that can be shaped and conditioned; but if it is moderate to severe, can rarely be eliminated.  Will is so very, very much better than he was, bu this is not a dog to volunteer for military duty. He just never will be a dog who is literally “bomb proof.” Will stills reacts strongly to some sounds, and gets nervous in noisy environments, but we cope with it without much trouble because of where we live and how I manage him. However, if a bunch o’ football fans wanted to come to the house and scream bloody murder over a game on TV, I’d put Will in his crate and shut the door (or go on a long walk!) Will could never make it in a noisy day care for example, so how ‘fixable’ this issue is depends on the context. The new pup is also quite sound sensitive, but he recovers quickly and isn’t anything like Will was when he was young. I’d score Will, when he was a pup, as an 11 (out of 10, no kidding), new pup as a 5, first pup as a 2. Both pups will be just fine, but new pup will take a bit more work. It will be easy to handle at this level of intensity, but is something to be aware of.

Dogs who are fearful: Fear can come in many different contexts, from fear of other dogs, to fear of unfamiliar people, to fear of environmental change or loud noises. Will showed no sign of fear of people until he was an adolescent (classic “juvenile onset shyness”), which was easily overcome by classical conditioning for about 6 months. However, he is easily overstimulated and frightened, and he’s just never going to turn into a dog who comfortable at a shooting range.

Dogs who live through their nose: Some scent hounds seem to put their noses down a few hours after birth and don’t pick it up unless you are rubbing their ears and there is nothing else going on. Of course, this is exactly what they are bred for, so it is surprising sometimes when people complain that their Bloodhound doesn’t listen in the woods.Can you train around that if you are a skilled trainer? You bet, but is this the dog who would be the best choice for a novice owner who wants a dog to stick around during long walks in the country? Maybe not. Context again makes this a cost or a benefit.

There are many other behaviors we can add to this list: I’d love to hear your input on it. But whatever the issue, here’s what is critical to understand: just as in medicine, some problems can be prevented if you can see them coming, some are easily treated or managed, some can be treated and managed with difficulty, and some are simply deal breakers in a particular context. And as one astute reader mentioned, many ‘problems’ aren’t problems at all… at least not in a particular context. I have seen so many dogs who were in big trouble until they ended up where they needed to be all along…

Ah… such a big issue! We’ll continue this conversation off and on in the future, because I think it is so important.

Meanwhile, back on the farm: Here’s New pup/Nick/Riddle/Chance/Flip/Bug-in-the-Rug with big brother Will. Pup is absolutely smitten by Willie, and Will is doing great with him. Who knows what will happen in the months and years to come, but right now, I’m going to soak up what’s happening right now. 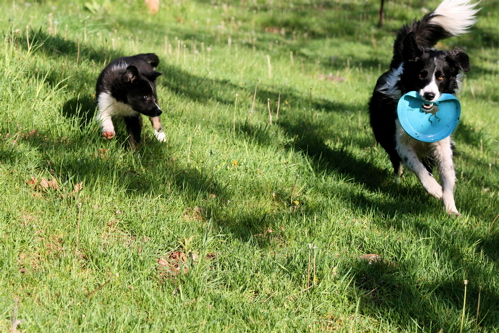