Welcome to an ongoing inquiry about the behavior of people and dogs.
Blog Home >> Animals and the People Who Love Them >> What Would You Like to Talk About?

I’m back in the office, refreshed and recharged and ready to go. And curious–what would YOU like to talk about? Canine-related book reviews? Other book reviews? (Have you read Leaving Time? Wow!) Case studies? Research? Training Ideas? Dog-Human relationships? Flowers? Recipes? Novels about dogs that incorporate flowers?

I’m all ears. Be as specific as you can, because that makes it easier for me to know where you’d like our conversations to go. One note: I won’t be posting as often as I have before. The conversations we have in the blog are special to me–illuminating, inspiring, and amusing, often all at the same time. I’ve cherished this forum, and I still do. But I promised Jim that I would take it a bit easier for awhile, and I am planning on honoring that. And I promised the dogs I’d have more time for them too. I feel like many of you are family, so I hope you understand. I’m not going away, just taking it a bit easier in my dotage.

MEANWHILE, back on the farm: It’s been glorious weather, including some good cool days to run dogs at the Nippersink or Swim Sheepdog Trial. Maggie’s runs didn’t get her a lot of points, but I was still pleased with her. Actually, I was thrilled with her first run. We ran out of time and so didn’t get our “drive points,” (you have to complete the entire drive to get any of the 30 possible points, even if you’ve done 95% of it when the time runs out), but she never put a paw wrong and handled an especially difficult ewe who challenged her at the post and took up a lot of time. I knew we were in trouble when “our sheep” were set out–3 sheep stayed close to each other, while one distanced herself from the rest and stood off on her own. Never what a handler wants to see while waiting to send their dog. A dog with more push than Maggie probably could have handled it faster, but Maggie is Maggie–brilliant at flighty sheep but a bit too soft so far on pushy ones. But she faced down the ewe several times and always won, and I was so proud of her.

Our second run was going great, until it wasn’t. Maggie reverted to our biggest problem last year, best translated as: “Go right? No…. I’m sure you meant go left, because that’s where the sheep want to go and I can sense that very well myself and besides that’s what you asked me to do a few hours ago, so I’ll just do an auto correct and fix your mistake for you.” It wasn’t an unreasonable thing for her to do in one sense–the direction of the drive changed on the second run, so Maggie was doing what we needed to do the last time she worked. But of course, then I had to stop her, and redirect her, which gave the sheep time to run back to their buddies 200 yards away, and Maggie had to use up valuable time bringing them back on the course.  But then things went well again until we ran out of time. Maggie is cautious when driving and illustrates my favorite saying perfectly: “Our vices are the excesses of our virtues.” Most people spend their time trying to slow their dog down; I am working on the opposite. However, we have another trial in 2 weeks, paws crossed.

What matters most to me is that Maggie and I both improved, we had a great time, saw lots of good friends and watched some brilliant work by savy handlers and clever dogs. Here’s some photos I took of Gordon Watt, one of the best trainers and handlers in the country, doing the “shed” with wonder dog, Storm.

Shedding requires that the dog and handler, working as a team, separate out one sheep from the group and keep it from rejoining the others. (This is a very practical exercise, although it is much harder than it looks. If Maggie and I knew how to shed it would save us lots of time herding the sheep down the hill to the sorting chute when I have to treat one or separate the flock for some reason.)

Here Gordon has positioned himself and Storm in exactly the right places to cause a gap between the sheep. Gordon is calling Storm to come in toward him and then turn and face the last ewe. 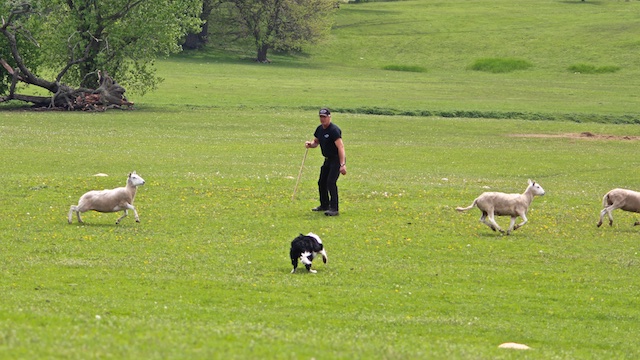 Look at how the ewe in the photo below has just put on the brakes, due to the pressure she is feeling from Storm. But that’s not enough for a successful shed. Storm has to hold the ewe away from the others for several seconds until the judge calls “good”. 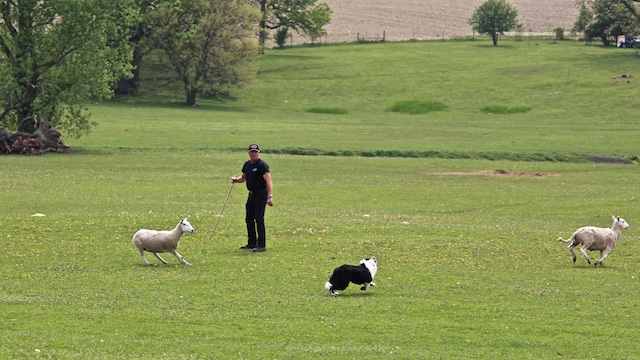 And here Storm is doing just that. Storm and Gordon make it looks so easy… Sigh, someday! 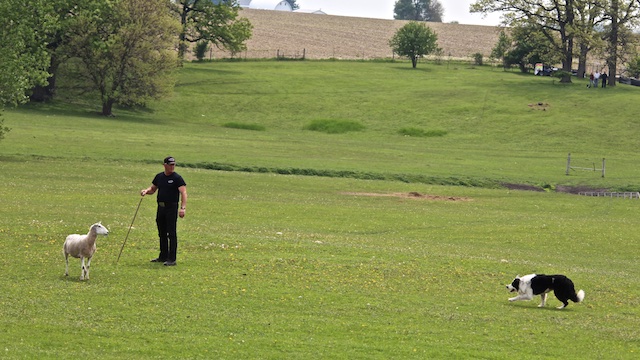 Here are some more photos from the trial: Thank you Margaret and all the volunteers for putting on an amazing trial, and to John Wentz who judged for five days in a row, about 10-12 hours a day. I have no idea how any can concentrate for that long. My hat is off to him. And congratulations to my friend Donna and her dog Shae, who got 4th out of 48 on her second run. Yay!

Don’t forget to tell me what you’d most like to talk about. I have lots of ideas simmering, but would love to hear from you.