Welcome to an ongoing inquiry about the behavior of people and dogs.
Blog Home >> Dog Behavior >> What’s Your Favorite “Non-Traditional” Cue?

A few weeks ago I wrote a post on the cue “Get Back,” which is one of my favorites because it is so useful in so many contexts. Katie Martz, Communications Coordinator here at PMcC, video taped Willie getting back in a variety of contexts, and we noticed that every time I said “Get Back” in a context in which he’d rather not, he tongue flicked. That led to a very interesting discussion with readers about why he was tongue flicking, but distracted us from the reason we did the taping: the usefulness of “non-traditional” cues in dog training. Yes, we all need Come, and Sit and Stay; I can’t imagine what I would do without them. But there are a variety of cues that are equally useful, but not as common or well known. I thought it would be fun to canvass readers to learn about their favorite “non-traditional” cues, and perhaps add to the vocabularies of all of us. Here are just a few to get us started:

ENOUGH: Along with “Get Back,” I also love “Enough,” no doubt in part because I have had dogs (and still do) willing to elicit play or petting until all the entire Antarctic ice pack melts and we are all paddling to work. There’s a video of Enough training in the Reading Room on the website, it’s the Second from the Top. I use it when I want to focus on important issues, including whether Castle and Beckett will ever have a relationship like normal people, when I am done playing with toys with Willie, and when I simply can not stroke Tootsie’s adorable little round belly pooch for one more minute.

TAKE IT/DROP IT: I teach Drop It as the flip side of Take It, and I find I use both of them often. As in: Please drop the dead bird you found, or please pick up your toy and bring it back in the house. I know these aren’t especially ‘non-traditional’ but they often aren’t taught in training classes and I wish they were. Far better to teach Drop It as a fun exercise rather than reflexively shouting DROP IT! in an angry voice and teaching your dog to swallow as fast as she can when she hears it. That seems to be the default of most dog owners, an understandable primate-like response, but not a good way to establish a good relationship with your dog.  I’d love to see it as part of dog training curricula and have included it in The Puppy Primer.

READY? This is a standard signal a lot of serious trainers use, but I wish again it was more common place. I love looking at Willie and asking him if he wants to engage with me. The key here is asking. It’s not a command or even a cue really, in the sense that I’m simply asking Willie if he’d like to start training something new or practicing something old. Any answer is acceptable and I have no expectations of his response, except as information. If he doesn’t turn to me, eyes shining, then he’s not ready, and I change my behavior until he is. Because the sound so often leads to working sheep or doing something that elicits treats or play, Willie seems to love the word as much as I do.

OUT: Katie Martz uses this with Lily, her beautiful Dogo. She uses it when she’s chopping vegetables in the kitchen, to prevent Lily the 90 lb white wonder from dancing on the counters in delight. Out means either go to another room or another surface (floor to carpet for example) or, essentially, stop bothering me right now. She taught it by tossing treats into the other room and body blocking her from coming back in. Lily seems to define it the same way Katie does (often rare in training, right?), because she will respond correctly to it in a new house or apartment.

WHAT’S YOURS? This is just a partial list, and I’d love to hear what “Non-Traditional” signals you use with your dogs that you especially love. I envision a very interesting discussion about it, thanks to all our thoughtful readers. I fully expect I’ll be teaching Willie a new cue by the end of the weekend….

MEANWHILE, back on the farm: It’s gorgeous but desperately dry. I am watering the trees in the yard, but who knows what will happen in the woods and the prairies. But it has been stunningly beautiful, one of the prettiest autumns ever. Dry conditions, followed by sunny days and cool nights are apparently ideal for fall color, and that has been the case here to a T. The sheep are doing well, although that’s not the answer you would get if you asked them. They are confined to the pen because the pastures are little better than dirt. It’s sad to see, but I have had excellent advice from a pasture specialist (thank you Laura) and have a plan to rehabilitate starting next spring. I’m taking soil samples in this week to get that part done now anyway, and we are, one by one, ridding the area of the thistles we didn’t get this spring. (Thistles appear to be drought proof apparently, such a shame they are not edible.)

However, thanks to Jim, who is the primary portable fence mover, the sheep are able to get some grass from selected areas in the front of the farm. In the photo below they are eating the lush grasses right alongside the road. This is the best grass on the farm: it’s a low area that gathers rain run off from a culvert, is shaded much of the day and is mowed by the county on a regular basis. There is a tiny bit of grass in other areas of the front lawn, and thanks to Jim, Willie and the portable fencing, the sheep will be able to get some of it. Most of their ration is the hay we purchased for winter, which we are going through at an alarming rate. But it’s good, rich alfalfa and the sheep are actually doing well on it. 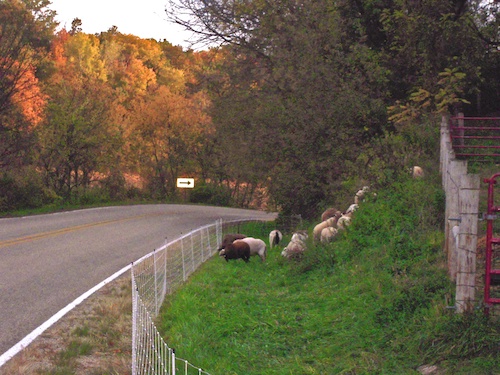 Last Sunday we all got out for a lovely fall walk in the fields and woods close to a good friend’s house. Willie’s shoulder has improved enough so that he is now off leash again. When I had to put  him back on leash, both inside and out, he became as depressed as any dog I’ve seen. It was, in a word, heartbreaking. Now that he can run free again he is back to his happy, happy self. We saw his physical therapist on Monday and she strongly advised that we go very, very slowly trying to bring him back to training for competition. It’s clear that his shoulder simply may never be able to handle the wear and tear involved in training for driving on a perfectly straight line, something that requires a tremendous amount of lateral stress on shoulder joints. If he can’t ever trial again I don’t think he’d care at all, as long as he can work sheep at home. It’s me that wants to trial, so although it would be a great disappointment to drop out now that I’ve caught the bug again, if Willie is happy, that’ll be enough for me. I’ll get over it, and Willie will not care one little bit. I’ll see how it goes, going very slowly and carefully.

Here’s the gang on the wooded part of our walk: Willie, Jim, Tootsie, good friend Beth Viney of Great Pyrenees Rescue of Wisconsin and her lovely lady, Tundra. Willie and Tundra did beautifully when they were re-introduced at the beginning of our walk (they had met once before, I have a video of it on my Dog-Dog Reactivity DVD and we all had a grand old time. Tootsie did get carried by me or Jim part of the way, the grasses were pretty high in some places and what was a path to us was a jungle to her. Short of teaching her to use a machete, we picked her up and carried her. But she was a trooper and still did a lot of walking, and we all had a wonderful time. Then Jim and I went back to doing farm chores, worked outside most of the afternoon, and ate a yummy dinner of local, organic pork, roasted root veggies and home made bread. We fell in bed about 9 o’clock and slept as if we’d been drugged. Hopefully there will be more of the same this weekend (the walks, farm chores and good food, we’ll pass on the “as if drugged” part.) 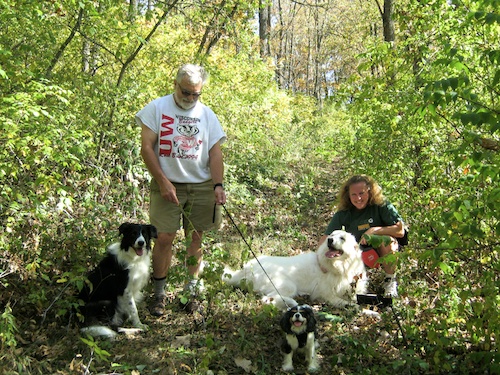 « Going to the Light
Can Dogs Tell Stories? The Question »