Welcome to an ongoing inquiry about the behavior of people and dogs.
Blog Home >> Animals >> When to Intervene in Dog-Dog Interactions

This is one of the questions I am most frequently asked, and with good reason. It’s a tough one. It’s also relevant to my own life right now, after having just introduced a new dog into the household, and having to make split-second decisions several times in the first few weeks.

I should say first off that there is no ultimate truth here. No research, no data, just my opinion based on experience with thousands of client dogs and plenty of my own. Certainly there is no dearth of opinions about when to intervene when dogs “get into it,” from the extremes of “I never intervene, I just let them work it out” to the opposite attitude of calling a dog off instantly, or correcting her, for a hard eye or a quiet growl. You won’t be surprised to learn that I live in the middle ground, not being a fan of black and white but rather the depth of color in between.

There are some extremes that I do find helpful, at least in deciding when to intervene. If I am absolutely sure that one dog is going to harm another either physically or emotionally, I will intervene without hesitation. On the other hand, if I am equally sure that a dog is merely using an appropriate social signal in a context that requires feedback from one dog to another, I’ll stay quiet. For example, every once in a while a male dog would mount my intact male Border Collie Luke. Luke was brilliant with other dogs; he adored them and worked hundreds of dog-dog aggression cases with professionalism and finesse. However, he didn’t like being mounted, and if that happened he would stop and freeze, turn his head and make direct eye contact with the offending dog. If it didn’t get off he would emit a quiet, low growl.

I never said a word, because 1) I believed that Luke’s behavior was within normal social boundaries–dogs don’t have to put up with everything and anything another dog does to them, and 2) I knew that Luke had never been in anything even approaching a dog fight, and 3) I also knew that if I said one word Luke would stop whatever he was doing and come to me. My only concern the few times that it happened was the other dog’s response; I’d watch to be sure that the other dog also responded appropriately, if it tensed up I would clap my hands and encourage us all to continue walking.

However, I’ve also seen and had dogs who over reacted in ways that were not appropriate either in context or intensity. Willie can be in this category; at times he appears to lose his temper, charging after another dog with teeth bared and growls emitting like angry thunder claps. This happens rarely now, thank heavens, but it still can happen. Willie did it once to tiny Tootsie, when he was tired and grumpy, and might have been in some pain from his shoulder. But that still wasn’t acceptable behavior, not to me anyway. Tootsie had merely walked by him and he reacted as if she’d broken all rules of canine citizenship. In that case I used my reflexive “Hey!” to stop him, and then backed him up in space and shamed him with a low, quiet voice. “Willie! What did you do?” I put him in his crate after that, not so much as punishment but to let him ponder what had happened and to rest up and prevent another incident.

But those two cases are relatively easy ones; it’s that great grey area in between “appropriate” and “inappropriate”  that makes it difficult to decide, isn’t it? How do we always know if the behavior is occurring in an “appropriate context”? Or if the dog is going to stop after a growl or snap? Argh, no wonder this is such a common question, because there are so many variables to consider, and every case requires a custom approach. The best we can do is be aware of all the variables, which I’ve listed here in hopes you’ll add your own wisdom to the mix.

Context: Willie went after Maggie over a stick the first week that they were together. They were running together in the big pasture, and Maggie was trying to grab a hold of the stick in Willie’s mouth. They hadn’t yet been together in the house, and clearly weren’t comfortable with each other except in a large, open area. Because I knew Willie was still tense about the new dog, I said “Hey” to stop him. I just wasn’t confident that he’d stop himself. Was I right to have intervened? Perhaps Willie would have stopped himself and nothing else would have happened. There’s no way to know, but I erred on the side of caution, and since they are great friends now, and run together while both holding a stick, my decision couldn’t have been too wrong.

Intensity: Did the reaction fit the stimulus? (As in, “does the punishment fit the crime”?) Say dog Bloomer walks over to dog Gracie while Gracie is chewing on her favorite chew toy. A hard stare from Gracie to say “Go away” doesn’t seem to be inappropriate here, given that it is simply a warning to the other dog. But charging after Bloomer, with teeth flashing and spittle flying would be an over reaction, since all Bloomer did was walk toward the toy. Of course, context comes back into play here: If Bloomer has been mugging Gracie relentlessly for weeks on end, Gracie may have just had it and needed to make her point with more intensity.

Knowledge of the Dogs: I am much more likely to intervene if I know little about the dogs. For example, if an unfamiliar dog comes running up to one of my dogs, tail up, mouth closed and body tense, I’m going to get between it and my dog and end the interaction. If I’m around two dogs I barely know and one begins to go after the other, I’ll probably say “Hey!” before I have time to think about it. In both cases, I have no idea of the history of the unfamiliar dogs, and I’d rather intervene when I didn’t need to than let things go and have a full-fledged dog fight on my hands. Full disclosure here: Twenty-five years of working with serious aggression cases probably makes one more reactive than others might be. I’ve just seen far too many stitched-up dogs or cases of one dog living in terror of another to sit back and “let them work it out.” The exception to “less knowledge, more action” is if I know that a dog is potentially aggressive and may cause harm. Then, for obvious reasons, I’ll intervene in a micro-second.

Potential for Harm: As must be clear by now, I’m conservative when it comes to dog interactions. If I don’t know if a dog is going to hurt or traumatize another I’ll intervene to prevent that possibility. If I do know that one dog is probably going to cause serious trouble I’ll do more than intervene, I’ll do all I can to PREVENT it in the first place. (I’m not sure that it is possible to overemphasize the importance of prevention, but does it help if I put it in caps?) Are there cases in which dogs have been allowed to “work it out” and been fast friends after just one fight? Yes. I just heard about one. However, I have seen a gazillion dogs who fought and were badly injured, or who fought and then hated each other. Yes, sometimes dogs can “work it out” but sometimes that means serious injuries or life long trauma. It’s not worth the risk in my opinion. It’s important to emphasize that dogs don’t have to be physically hurt to be injured. Dogs can be emotionally traumatized, and I’ve met no small number of them who became dog-dog aggressive after just one incident in the dog park in which “no one got hurt…”

MEANWHILE back on the farm: Besides the gorgeous weather, the best part of the weekend was Puppy Up!, the fund raiser for the Two Million Dog Foundation which raises money for comparative oncology research. It was a great success! Over 500 people and 300 dogs came to walk in support of cancer research in dogs and people. Katie, Lisa, and I from McConnell Publishing joined the Madison Pet Pals team (which raised the most money of any single group; yeah Pet Pals!). Here’s Katie (our Client Coordinator and Social Media Queen), Tim, and one of their dogs, Herk, before the walk. 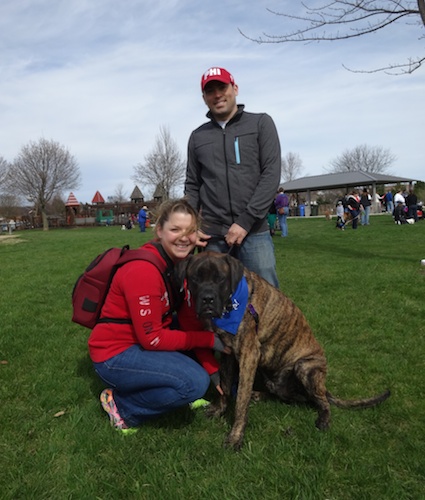 Thanks to many generous people, including blog and Facebook readers (thank you so much!) I made my personal goal of $3,000. More importantly, the Madison event (Puppy Up! events will be in 34 cities this year) raised more money than any other single city, bringing in over $83,000 to put toward studying cancer in people and dogs. Special kudos go to wonder woman Beth Viney, who did more than any other to make this event a success.

Here’s a photo of squinty-eyed me and the man who began it all, Luke Robinson, who walked 2,000 miles with 2 dogs to raise money for research after losing a beloved Great Pyrenees to cancer. We are joined by his dog Indiana, who will accompany him on yet another 2,000 mile walk from the Mexican to the Canadian border. Amazing. You’ll note my face looks just like a dog’s who is overwhelmed with happiness to be greeting someone special. That’s exactly how I felt. What an honor to meet him, and what a testament to what one person can do. 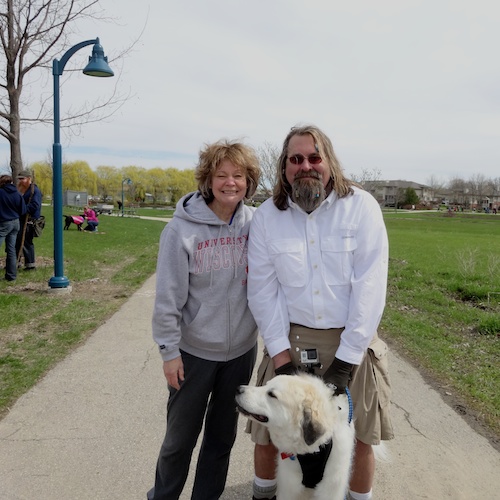 This is just a small section of the walk’s participants to give you a good idea of the festivities. Lots of smiles all around, and kudos to the people who brought dogs–the dogs who came seemed comfortable and to be having a great time. I didn’t bring any of my dogs, because I knew they wouldn’t enjoy it. It appeared that a lot of people made good decisions about who to bring and who to leave home. Great work, Madison, I’m proud of you! 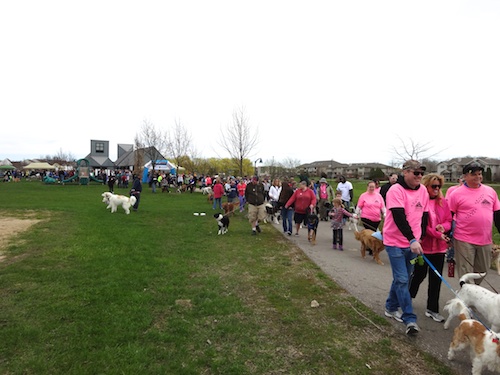