Welcome to an ongoing inquiry about the behavior of people and dogs.
Blog Home >> Animals and the People Who Love Them >> Who Is Wearing the Pants in this Family?

Here’s my proudest moment in life (so far): It’s 1967, when the idea of women wearing pants was still a tad radical. But “pants suits” had just came out–dressy outfits that put trousers on your legs instead of a skirt, even for eveningwear. I worked as a salesgirl in a boutique in Scottsdale, AZ, and bought myself the yummiest orange, corduroy pants suit that you could imagine before it even hit the rack. The jacket was lined in orange silk. It was gorgeous.

I decided to wear it to the San Diego Naval Officer’s Club, having been invited to a special dinner there by my boyfriend and his best friend who was in the Navy. I got as gussied up as I could, tossed my long, dyed-blond hair over my shoulders and walked with Doug and Don into the lobby of the San Diego Officer’s Club. An older woman behind the reception counter stopped us immediately. She said, her mouth looking as if she’d just sucked on a lemon, “Women are not allowed in this building if they are wearing pants! This is a respectable establishment!” Nothing we could do or say could change her mind.

MEANWHILE, back on the farm. So good to be home! APDT was excellent and it was great to be there, but still so good to be home. And lucky me, the weather this weekend was gorgeous. Flat out perfect, really–ideal weather for working outside, with bright sunlight on the Halloween colors of yellow and orange trees in the woods. It’s been a perfect combination for me of time with the dogs, time in the kitchen and garden, and time with friends. Tootsie and I did Pet Pals on Saturday. She and a disabled young man broke my heart in the best of ways, he smooching his lips as best he could to her, she cuddled on his lap for the longest time. Maggie and Willie have worked sheep both days, Sunday at a good friend’s that allows both dogs to get used to working different sheep in a different environment. Willie finished his work yesterday by allowing my sheep to graze the front lawn before they got their hay Sunday afternoon. The grass up the hill is long gone, but the grass on the front lawn is luscious. It’s not fenced though, and if I didn’t trust Willie the sheep could not have had their snack. I suspect they aren’t aware that they need to be thanking Willie though…

Jim made chicken noodle soup, and I made cabbage soup, all with yummy meat and veggies both local and organic. Much of it is now stored in the freezer for the dark nights to come. Saturday night we got to see Colin Mochrie from Who’s Line Is It Anyway?, one of my favorite television shows. I love to laugh, and we laughed so hard we got tears in our eyes. I hope you’ve had some good laughs too lately. Remember that laughter is good medicine, and one of the few things we can’t share with our dogs. (Although, I swear there’s a photo in The Other End of the Leash of Cool Hand Luke laughing at my hair…)

Here’s Willie moving the flock this afternoon. Some of the sheep are new; meet Chili on the right, Pink is the white face staring out at you from the middle, and two new lambs in the front. I don’t know how long they will stay, I brought them in to have new sheep for Maggie to work, but I ended up naming them within 24 hours. Chili, by the way, became instant flock leader the second she jumped off the truck. Very interesting; no aggression, not even a head butt, but she literally leads the flock and has first access to anything good. The new lambs, on the other hand, came in a few days before the new ewes, and were treated brutally by some of the resident ewes. Spot (not in the photo) was so aggressive that I sent her to her room without dinner. (I locked her into a pen for the night, she was backing up 30 feet and slamming into the lambs so hard she sent them flying.) My my. 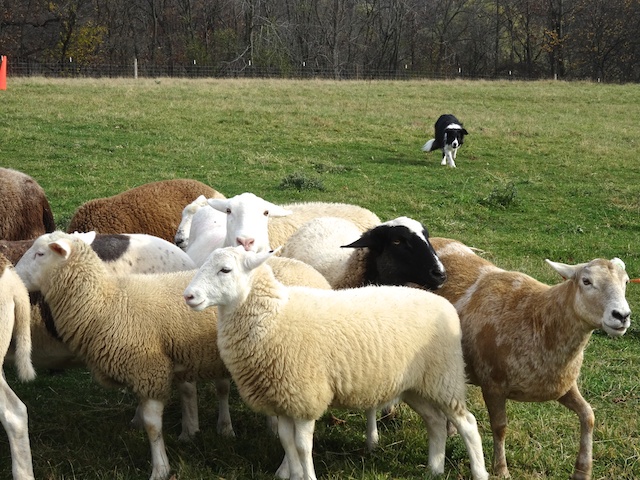