Welcome to an ongoing inquiry about the behavior of people and dogs.
Blog Home >> Animals and the People Who Love Them >> Who’s Doing Research on Canine Cognition?

Julie Hecht, who holds a Masters in Applied Animal Behavior and Animal Welfare from the University of Edinburgh, gave a great talk at IFAAB this year that included a summary of the labs around the world that are studying canine cognition. Since I so often get inquiries about graduate level education in all things dogs, I thought some of you would be interested. Right now Julie is managing the Horowitz Dog Cognition Lab at Barnard College in NYC, teaches Applied Animal Behavior to Anthrozoology graduate students at Canisius College and writes for The Bark about canine science. And I love her blog, DOG SPIES, which is dedicated to getting solid, scientific information about dogs into the hands of dog lovers everywhere. I say yeah for her!

Here is her list of Canine Cognition Research Groups around the world, including links to their sites.

University of Vienna, Austria. “The Clever Dog Lab,” with Zsofia Viranyi and Friederike Range. They did the work on human and canine responses to growls and “inequity aversion” in dogs.

Max Planck Institute, Germany. Michael Tomasello, Josep Call & Juliane Kaminski (and previously B. Hare). They did much of the work suggesting that dogs innately understand human pointing gestures because of their long association with humans (but see M. Udell’s study on a previous blog!)

Animal Behavior and Cognition, Italy. I don’t know much about this group and don’t read Italian (although I wish I did… I think it’s got to be the world’s most beautiful language!). Any Italian readers out there willing to translate for us?

University of Lincoln, UK (England). Especially interested in behavior as it applies to animal welfare.

Anthrozoology Research Group, Australia. From their website: Anthrozoology is the study of human (anthro) and animal (zoo) relationships. In our work, we focus particularly on companion animals. When interspecies relationships work well, they provide terrific health and well-being benefits for both humans and animals. When they fail, however, animals can suffer terribly and so can humans. What we do is use a multidisciplinary approach to try to understand what makes our relationships with companion animals succeed or fail. We then use our knowledge to try to make life better for everyone, whether they have two legs or four.

University of Western Ontario, Canada. The link is to their FB page; lots of interesting information and studies discussed here.

Barnard, New York City. This is where Dr. Alexandra Horowitz studied what is often called the “guilty” look in dogs (showing that it is appeasement, not “guilt”). Ms. Hecht also did studies on this topic for her Masters, and now runs the lab at Barnard. Michele. Wan, whose work on people’s ability to ‘read’ dog’s emotional states I’ve discussed here, did her work at Columbia University, which Barnard College is associated with.

Duke, North Carolina. Now the home of Brian Hare. Here’s from their website: The Duke Canine Cognition Center (DCCC) is dedicated to the study of dog psychology.  Our goal is to understand the flexibility and limitations of dog cognition.  In doing so, we gain a window into the mind of animals as well as the evolution of our own species.  We can also apply our knowledge of dog cognition to improving programs in which dogs are bred and trained to help humans (i.e. service dogs for the disabled, etc.).

Eckerd College, Florida. Lauren Highfill. From their website: Are you interested in learning more about your dog’s behavior, personality, and thought processes? We are! The Dog Behavior Project conducts non-invasive behavioral experiments to try to answer these questions. We are always searching for new dogs to join our research team.

University of Florida. Home of Dr. Clive Wynne and Nicole Dorey, and where Monique Udell did her work testing Hare and Tomasello’s contention that dogs could innately understand pointing gestures. (Her works suggested that environment is more important than genetics.) Wynne and others have collaborated with Wolf Park in Indiana to compare wolf and dog behavior.

University of Kentucky, Comparative Cognition Laboratory. From their site: We are exploring the cognitive abilities of our canine friends. The goal is to define, measure, and distinguish dog behaviors. In the past it has been believed that the associations dogs make are based on either a positive or negative outcome. We are attempting to document the occurrence of more complex cognitive abilities through a variety of situations.

Here’s what I’d love from readers: Any of you who have worked for, at or volunteered for any of those labs, please let us know more! We’d all love to hear more about what’s going on around the world about what’s going on inside our dog’s heads….. And thank you, Julie again, for compiling the list.

MEANWHILE, back on the farm: I’m actually back on the farm, that’s the biggest news for me. Tomorrow will be my first day off in three weeks, and  my first weekend home since Feb 25th. Ahhhhhhh! My travels have been well worth it, but still, Dorothy (the girl in The Wizard of Oz, not the ewe!) was right. There really is no place like home.

This weekend will be especially fun; students from the University of Wisconsin Vet School will be out to learn from Dr. Harry Momont how to do ultra sound pregnancy tests on sheep. It’s a bit moot, since the flock is due starting March 28th or 29th, and every ewe is obviously pregnant (yeah to the new ram, King Charles), but still it’s a great exercise for the vet students.

Here are some photos from the last few days: First, here’s a wild javelina that one of my favorite authors, Sy Montgomery, and I got to see at the Tucson Wildlife Center. The center does fantastic work rehabilitating injured abandoned animals in southern Arizona. They rehab individuals of many species, including lots of raptors with broken wings, a now grown Bobcat who needs seizure medicine due to he and his litter being run over by a tractor and a tame Coati Mundi who has no idea how to make it on her own in the desert. The staff is almost all volunteer, and does amazing work. I loved how they pair adult animals unable to live on their own as foster parents of injured or abandoned young. That allows them to keep human-animal interactions to a minimum, so that as many animals as possible can be returned to the wild, having been raised by members of their own species. The wild javelina in the photo was attracted by the javelina’s in rehab. Apparently the wild ones stop by to chat on a daily basis. Sy is the one who arranged the visit, a huge THANKS! to her for doing so. It was a wonderful break from what was also a wonderful book festival. 80,000 people on Saturday alone? Amazing! 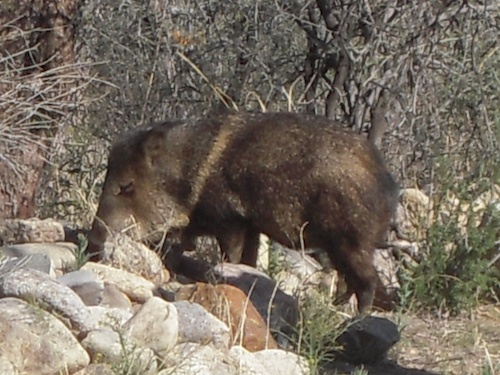 And back in Wisconsin, here’s Rosebud being shorn the day before yesterday by Jerry Rice, to whom I pay multiple times the going price because he is so very, very good with my sheep. He’s fast yet gentle, and left not a nick on any of my girls. I’m so lucky that he is willing to come out to shear my tiny little flock. Rosebud’s two ewe lambs are in the background, Oreo and Butterfinger. They are due beginning in a week and a half. Oh my, where did the time go? 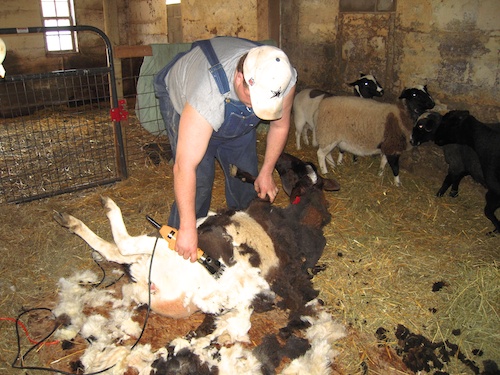