Welcome to an ongoing inquiry about the behavior of people and dogs.
Blog Home >> Animals and the People Who Love Them >> Why Do Dogs Roll in Disgusting Stuff?

Why do dogs roll in disgusting stuff? Ah, but of course, it’s not disgusting to them, right? But oh, the things with which dogs anoint themselves are usually awful to us humans, even with our lousy sense of smell. Here’s what I wrote about it in The Other End of the Leash:

“If you haven’t smelled a dog who’s rolled in fox feces, then your life is slightly better than mine, because it’s a horrible smell, skunky and repulsive, and it clings to dog fur like a burr.”

But why DO dogs roll in strong smelling scents? And why choose the scents that they do? Why not roll in mint or lavender or, for that matter, old food cartons left on the sidewalk? First, let’s look together at the guesses about why dogs roll in the first place.

One suggestion is that they aren’t trying to get the scent on themselves, they are trying to get their scent onto the smelly stuff on the ground. This idea makes little sense to me, since dogs use 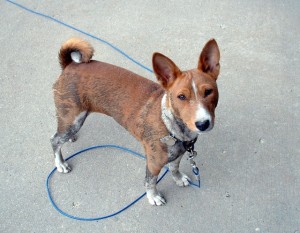 urine and feces to scent mark just about everything and anything. Why bother with the milder scent of a shoulder or the ruff around one’s neck when you’ve got urine to use? (Tulip, the sheep guarding Great Pyrenees, used to urinate AS she was eating her dinner, most likely because the sheep tried to eat her food.)

Another hypothesis is that that dogs roll to camouflage their own scent, all the better to sneak up to prey. Stanley Coren, author of many books on dog behavior, suggested that this idea has merit, in that it would be adaptive if canids could fool their prey by pretending to smell like them. I’m skeptical here too. First off, most prey animals are highly visual, and use sight and sound to be on the alert for predators. It’s not that they can’t use their noses, but their noses are dependent on wind direction and so sight and sound are often more important. (That’s why hoofed animals have eyes on the side of their head, the better to see you with Mr. Wolf, if you are sneaking up from behind. It’s also why deer and other prey animals have huge ears that swivel around like mobile satellite dishes.) In addition, if a prey animal’s sensory ability is good enough to use scent as a primary sense for predator detection, surely they could still smell the scent of dog through the coating of yuck. Neither does this explain the intense desire of dogs to roll in fox poop.

It has also been suggested that, like bees bringing back information about food sources to the hive, canids covered in stinky stuff are informing their pack members of something important, or at least interesting. Pat Goodman of Wolf Park once experimented by placing different scents in the wolf enclosure, and found that the wolves rolled in the usual stinky poopy stuff, as well as perfume, a fish sandwich with tartar sauce, and the dog repellent Halt!. Pat noted that several times other wolves followed the scent back to its origin, after smelling it on the fur of the roller himself. Given the highly social nature of wolves, the idea that scent rolling might be a way of returning information to the pack  has merit. As I mentioned earlier, even bees learn about food sources by smelling it on the bodies of their sisters, so it seems reasonable that this could be a way of conveying interesting information in a mammalian species.

Another theory, as I describe in the chapter “Planet Smell” in The Other End of the Leash, is the “guy-with-a-gold-chain” hypothesis. Perhaps dogs roll in stinky stuff because it makes them more attractive to other dogs. “Look at me! I have dead fish in my territory! Am I not cool?!” Behavioral ecology reminds us that much of animal 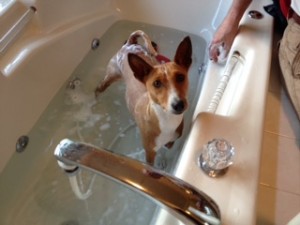 behavior is related to coping with limited resources–from food to mates to good nesting sites. If a dog can advertise to other dogs that they live in an area with lots of dead things, then to a dog, what could be better?

But maybe dogs are like us, and use strong smells  for two reasons, the same way in which we use perfume. Perfume or aftershave is used not just to make us more attractive to others, but also because we like the smell too. It seems to make us feel good. Perhaps dogs are using strong smells both to attract others and to self-perfume themselves. It’s not like they can go to the counter at the department store, or order on line after all. Stanley Coren likes this idea too, and penned my favorite line of all time about the issue in Psychology Today: “Therefore, I believe that the real reason that canines roll in obnoxious smelling organic manner is simply an expression of the same misbegotten sense of aesthetics that causes human beings to wear overly loud and colorful Hawaiian shirts.”  Ta Da Boom.

But another related question: Why roll in what they roll in? What’s the attraction? The range of items seems to be large (I’d love to hear your examples), but the underlying theme seems to be things that have very strong smells. Dead fish. Fox poop. Lots of animals do what is called self-annointing, like this hedgehog, often involves feces and urine. Some animals seem use the scent as a repellent, others use it as an attraction, or even a pheromone to change the behavior of others. Male goats urinate on their own chins during mating season; an advertisement that even we humans can’t miss if we are within half a mile. But in all cases, the scent is strong, strong, strong. “The better to make you notice me, my dear.”

Here’s what we do know: Dogs are programmed to roll in the strongest smelling stuff right before you have company. Or have to leave right away, and are all dressed up. Guaranteed. I have had dogs roll right before twenty-some people were coming for a $1,000 a couple fund raiser that Jim and I put on for Wisconsin Public Radio for years. Jim and I spent weeks preparing–we donated everything: tables outside with white table cloths, flowers, lamb BBQ and food I’d cooked for days on end–all to help raise money for public radio. We took the dogs outside for one last pee before the guests arrived, and you guessed it, within seconds, Border Collie Pip threw herself onto the grass in a microsecond and ground fox poop into her shoulder.

I expect many of you out there have your own story about the “worst possible time” for a dog to roll in something disgusting. Send them in. Best one wins a prize!

MEANWHILE, back on the farm: Speaking of parties, we had a lovely party this weekend to celebrate my retirement from teaching “The Biology and Philosophy of Human-Animal Relationships” at UW-Madison. I’ve taught the class for twenty-five years, and although it I’ll miss the students and delving into the complicated and often contradictory aspects of the HA relationship, it felt like it was time. I have a lot of wonderful memories of teaching the class, and still hear from students who are scattered across the globe doing wonderful things. (Write in and say hi if you are one of them, no matter what you are doing right now!)

Here’s one of my favorite photographs from the party, of me and my major professor and now dear friend, Jeff Baylis, who is the one who first got me interested in sheep dogs to begin with. Needless to say, I owe him a lot, and loved being able to talk about the “early years” together. Thanks to Robert Streiffer (philosopher and photographer extraordinaire) who took the photo. 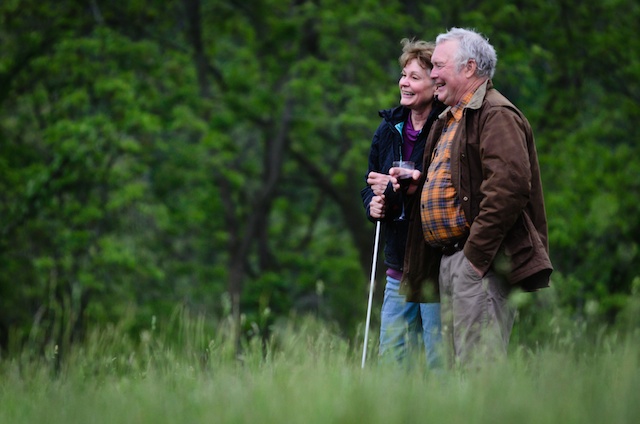 Also wonderful was having three remarkable young women who acted as Teaching Assistants for the course over the years: Vera Pfeiffer, Meghan Fitzgerald and Peggy Boone.  They made the course extra special and it was wonderful to see three “generations” of biologists all together.

I did a lot of cooking for the party–here’s a photo of my favorite appetizer. They are ridiculously easy to make (just google Apple Roses), although I varied the recipe and used herbed goat cheese to make them savory. While I was passing those around, Jim grilled the lamb burgers; Yum Yum to the chef. 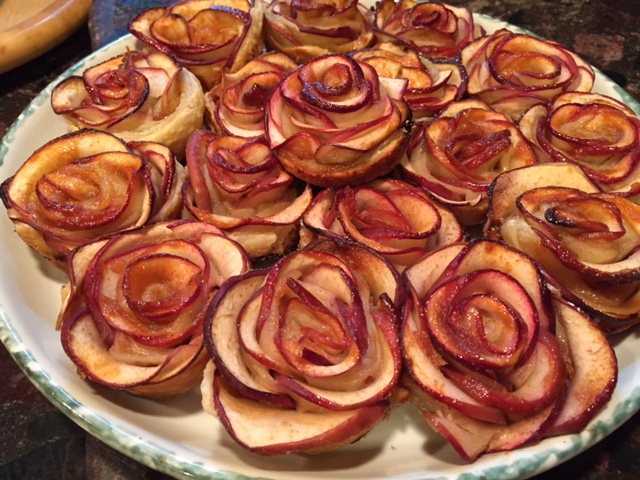 Thanks to everyone who came, and made it a very special day.

« Can Your Dog “Smell” Your Emotions?
What Do “Dog Walkers” Need to Know? »