Welcome to an ongoing inquiry about the behavior of people and dogs.
Blog Home >> Animals and the People Who Love Them >> Why Do We Love Dogs So Much? So, So Much?

I shouldn’t have been surprised at the depth of my grief when Willie died. After all, I’m the one who wrote about his uncle that “I imagine his death as if someone took the oxygen out of the air and I was supposed to live without it”. Every week I post comments from people who have had to put dogs down, and their pain and suffering is so acute it hurts my heart every time I read them.

And yet, the tsunami of grief that overwhelmed me after Willie died was so intense that I barely made it through the first few days. I knew it would be awful. Just not that awful. Now that I am no longer in danger of drowning, I can’t stop wondering why we love our dogs so much that their deaths are almost unbearable. I think it’s an important psychological and sociological question that hasn’t had enough consideration.

Here’s my best guess: Dogs get us coming and going. They elicit profound love and nurturance as do our own young, AND they give us the unconditional love we all need/want from our parents. In other words, they wrap us up in everything we need from our families, from the bottom up and the top down. Bear with me while I elaborate:

First, grown up dogs may be sentient adult mammals, but they are non-verbal and basically helpless, just like our own young. Dogs can communicate, but they can’t use the richness and nuance of human language. This is often a disadvantage–they can’t tell us what’s hurting them, or take comfort in our explanation of thunder. However, it is of course also an advantage, in that it makes our relationship with them simpler and devoid of the baggage that weighs on our human relationships like an anchor. 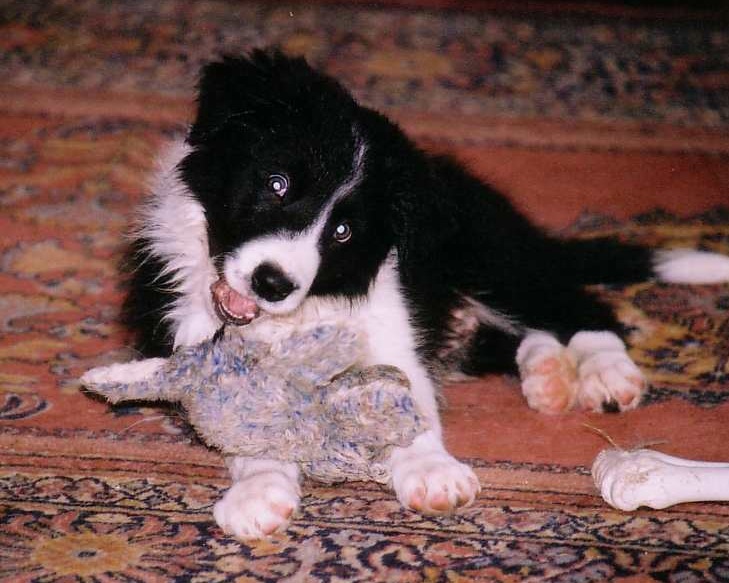 These advantages and disadvantages are important, and they are all based on the fact that like human infants and toddlers, dogs can’t talk. And many ways, they are as helpless as a toddler. Sure, they can face down a ram in the barnyard, or scratch open a cabinet door to get the garbage, but they can’t open a door to escape a fire, they can’t buy their own dog food, and they can’t tell us when and where they are in pain.

Thus, dogs elicit primal emotions from us that are central to our being. Our brain, hormones and behavior are designed to respond to young, helpless mammals. If it wasn’t so, no three-year old would make it past the day that they’d painted the wall with feces when their parents were so tired they could cry.

None of this is new to any of us, right? Neither is it news that dogs are famous for giving us “unconditional love”. Most of the time dogs seem to think we hung the moon, even though none of us really deserve it. (Caveat: See “dogs can’t talk” section above. Willie’s uncle Luke had a look I called “—- You”, and the first word wasn’t “Love”.) But most of the time, there is simply no one in our lives that loves us as much as does a dog. You’d think we’d won a gold medal when we arrive home and our dog’s behavior says YOU ARE THE MOST WONDERFUL THING THAT EVER HAPPENED TO ME. Every time we pick up a leash or a shepherd’s crook or the car keys we are THE BEST THING EVER IN THE ENTIRE WORLD. 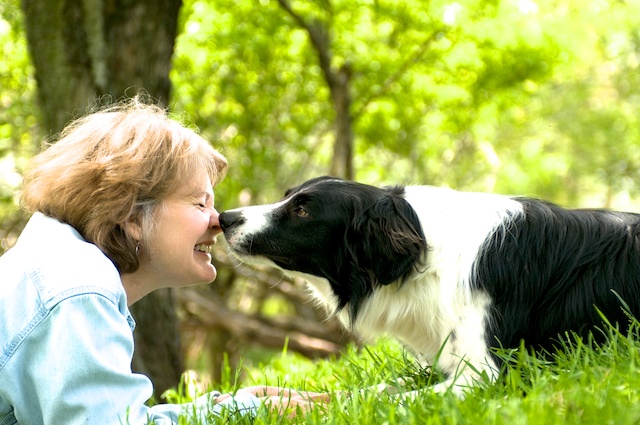 But there’s more to this “unconditional love” thing than making us feel momentarily happy. The desire for it is as primal as the need to nurture baby mammals. We hear at length about the need for children to feel unconditional love from their parents to be truly healthy as adults. (Remember that this does not mean spoiling children or creating no boundaries. I love you does not equal I love everything you do.)

Ask any parent (or child) how easy this is to pull off. Not many of us, even those who have had good, caring parents, grew up feeling unconditionally loved. Not many parents that I know feel like they’ve pulled it off as well as they wish they had. And yet, dogs are experts at it. How often, in the rest of your life, do you feel like THE BEST THING IN THE ENTIRE WORLD? In capital letters? What a gift.

And so, here we are, smack in the middle of two basic, primal needs that only dogs can give us–the need to nurture, love, and protect young mammals who are part of our family, and the need to feel deeply loved, just because we are, well . . . us. So dogs are primal replicates of our children and our parents, all wrapped up into soft, cuddly individuals with loving eyes, expressive faces and goofy tails. Wow. No wonder. 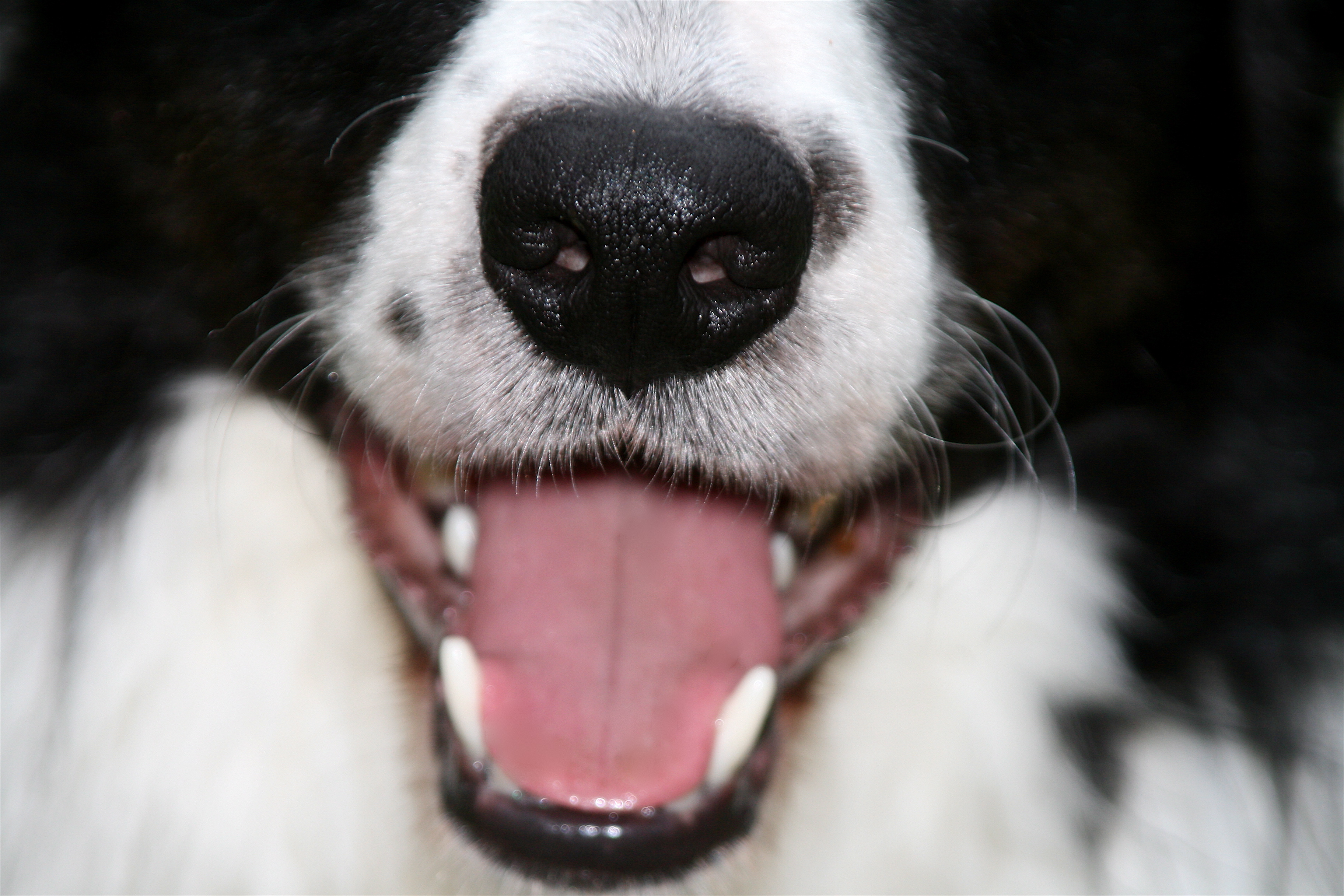 In some ways, none of this is news. But I haven’t heard those two things put together in quite the same way. And you? What do you think? I’d bet the farm (and I have one to bet) that there are some of the world’s greatest dog lovers reading this post, and I’d love to hear your thoughts.

MEANWHILE, back on the farm: We’re just back from the Nippersink or Swim Sheepdog Trial outside of Lake Geneva, WI. It’s one of my favorite trials because the course is gorgeous and huge, and the sheep are “light” and reactive rather than “heavy” and stodgy. Maggie loves huge, open areas and loves light sheep, although in her first run she over flanked repeatedly, not being used to sheep that are so responsive. But she quickly adapted and worked the sheep beautifully on second run. It was her first big trial since last July before she injured her leg so I was truly happy that she had a lovely second run. She made one costly mistake at a key moment (argh!), and lost a lot of points because of it, but we both recovered, got back on the course and got a very tricky pen. Most importantly, she was as happy as I’ve seen her since Willie died, and that was my primary goal. Willie loved the smaller, easier novice courses, but didn’t like the pressure of long drives in what’s called Open Ranch or Pro Novice class. Maggie seems to adore trialing, and always wants back on the course after her run. It was rough skipping almost all of the trial season last year because of her leg injury, not to mention all the time (and $) spent on physical therapy, but, cross your paws, it seems to be paying off.

Here’s just a small section of the course. It’s one of the prettiest in the Midwest. 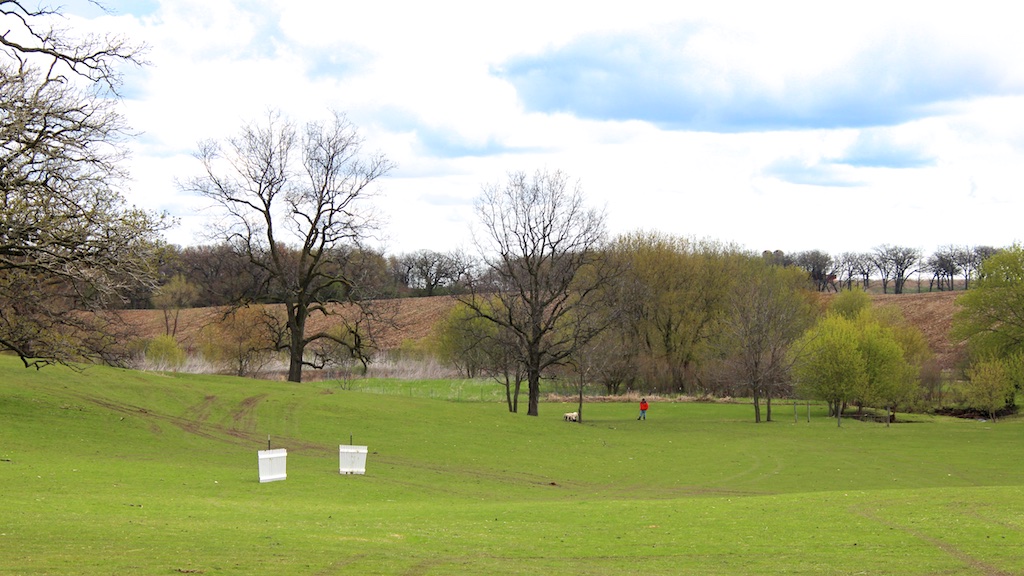 I love this photo below, with its gorgeous green hills in the background, the reality of spring in the foreground (aka “mud”), and the commitment of the dog to get around to the back of the sheep and turn them into the exhaust pen. 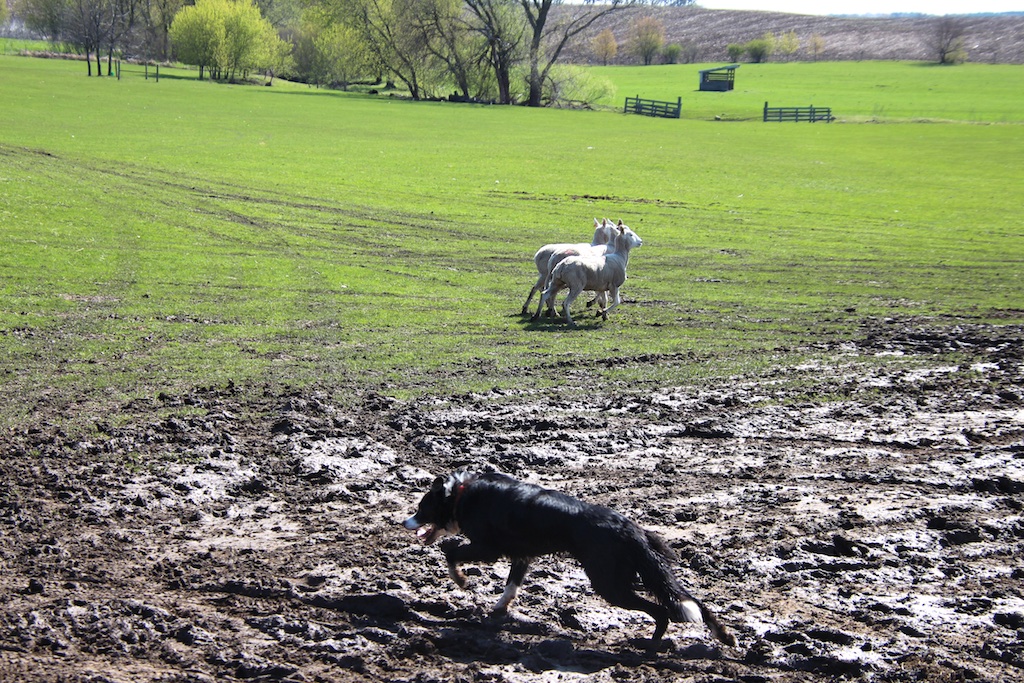 You don’t want to stand in the way of sheep going into the pen to join their flockmates. 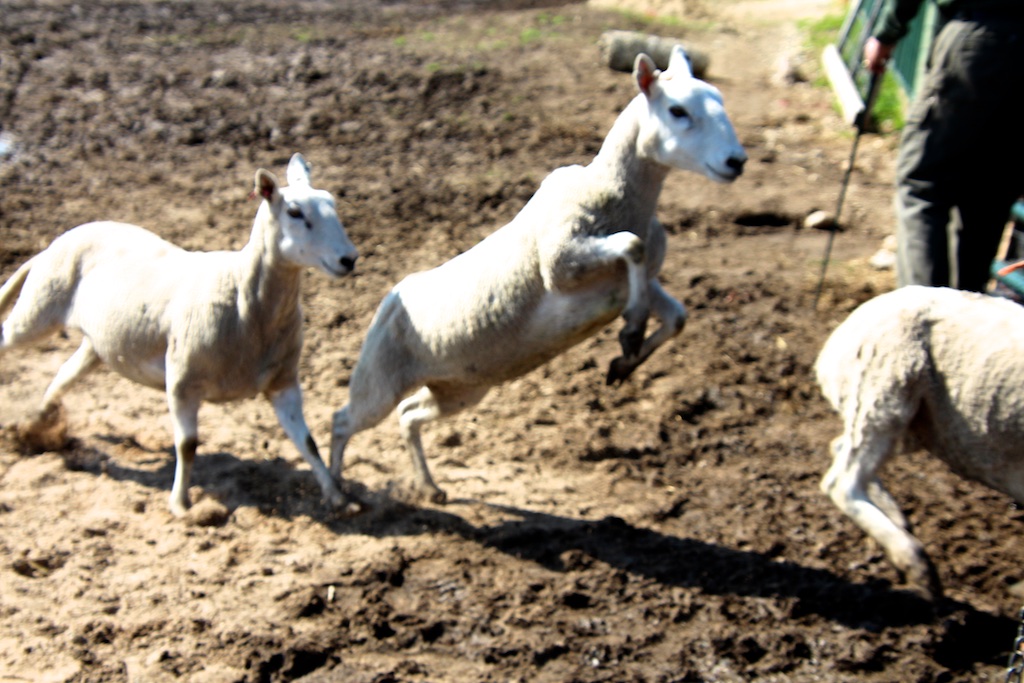 A few more photos from the weekend (from top left, clockwise): The whistles we use to communicate at a distance, paws in black and white, the ubiquitous porta potties, rain and mud required lots of shaking off, and Maggie enjoying a play session to warm up before her run.

I look forward to your thoughts about our love affair with dogs.