Welcome to an ongoing inquiry about the behavior of people and dogs.
Blog Home >> Canine Cognition >> Why Dogs are More Afraid of Men

Clients often tell me that their rescue dog must have been “beaten by a man” when the dog was younger, because the dog is afraid of men and not woman. However, people in the training and behavior field know that almost all shy dogs are more afraid of men than women, even if men have been nothing but kind to them their entire lives. We’ve always speculated that it had something to do with the way men walked (more assertively?) or their bigger chests, larger jaws, and/or deeper voices. But we’ve never really known for sure what it was–perhaps it is related to scent: obviously men smell different than woman, and it could be that just ‘maleness’ is more intimidating.

A recent study reported in Scientific American Mind might have shed some light on this topic. (Actually, I read it and jumped up exclaiming OH WOW and then had to tell Willie that everything was alright.) Research published in Current Biology asked volunteers to guess the direction of motion of figures that were represented only by points of light placed at critical joints. (Similar to the motion capture process used to make movies like Avatar in which a real person moves around with points of light attached to hips, elbows, shoulders, knees etc, and a computer records the movement of the lights.)

When watching the points of light that represented a moving figure, the volunteers said that the figures made by men were approaching, while the figures made by woman were retreating. I haven’t read the study yet, and am a bit confused by the report in Sci Amer that “neutral and masculine gaits” were perceived as coming closer, while “feminine walks” were perceived as moving away. What is a “neutral” walk? Did they not use men and woman walking normally, but asked them to exaggerate how they “thought” men and woman walk?

All this can be answered when we get the study, but assuming the methods were sound, what an interesting piece of information for us. If the critical points of men are seen as coming closer at higher rates or stronger intensity than women, no wonder dogs are more afraid of males than females. Fearful dogs are ALWAYS more afraid of something coming at them than they are at approaching something themselves.

Meanwhile, back on the farm: It’s all about Lassie now. Thank you from the bottom of my heart for your kind and supportive comments. I’ll keep anyone who wants to know about her progress updated in the comments section of the Lassie post. I don’t want to burden this blog with my private soap opera, but I also know that many of you have seen and read so much about Lassie that you feel connected.

Here’s a photo I took a few days ago, of what it looks like when it gets warmer and the snow starts sliding off the roofs. I love the designs it makes: 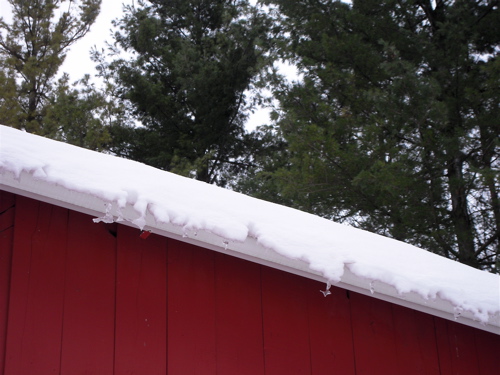