Welcome to an ongoing inquiry about the behavior of people and dogs.
Blog Home >> Border Collies >> Willie Learns to use his Nose; Sheep Shearing Fun

One of my favorite games with Willie is to put him on sit/stay and then hide one of his toys in another room. I release him and tell him to go find his toy. We both think it’s a hoot and get all waggy from the shoulders back together. We’ve played it on and off for months, but I started doing it on a daily basis in preparation for his surgery and restricted exercise. Until recently, Willie always looked for the hidden toy. It was overwhelmingly clear that he was using his eyes, and if he couldn’t see it, he couldn’t find it. However, after about a week and a half of playing the game 4-5 times in a row every evening, Willie completely switched strategies and started using his nose. The switch was absolutely obvious: he’d trot out of the room he’d been in with his nose in the air, sniffing with his nostrils flaring and his head up. Once I noticed his busy nose, I started hiding the toy in harder and harder places, where he couldn’t see the toy at all (or barely.. my favorite is to slide a thin, narrow toy between books in a book case).

Not atypically for a Border collie,  Willie has always used his eyes or his memory to find things. Of course he uses his nose a lot, but this change in “find the toy” strategy seems to delight him as much as it does me. What I love most about it is how it reminds me daily of the ‘wonderful world of scent’— without having to lay a track. (I took one tracking class and was uproariously incompetent. My best skill was cracking up the entire class by wrapping myself up in the lead while juggling my map and flags and trying to place my feet in only the right places. Too bad there was no video, it was a Lucy O’Ball-ish moment of the highest calibar!)

Last night I hid the toy behind some objects behind a door, and at first Willie moved away from the door, part way up the stairs. I realized immediately that the currents in the house were blowing the scent through the crack in the door, through the living room and up the stair case. Will got about halfway up, found that the scent was disappearing and then followed it back down into the right room and xero-ed in on the toy right away. Too cool.

Shearing went really well.  I have a great shearer, and I pay him almost double to come because he is so kind to the sheep. Once they’ve been shorn once, if it was by a skilled shearer, they don’t seem to mind all that much. I’m sure they’d rather not have it done, but I also wouldn’t be surprised if it doesn’t feel good to them to have all that wool taken off. The weather cooperated… it is sunny and warm and will be all week. That is such a relief, you never know what it will be this time of year.

After being shorn, every year, the sheep seem to behave toward one another as if they have just been introduced. Here are some photos of a great shearer, Jerry Ace just starting to shear the belly of yearling Spot. Look at how white it is under the clippers!  The next photos are of Dorothy and Truffles competing for status, just like a couple of rams out of a Natural Geographic special. 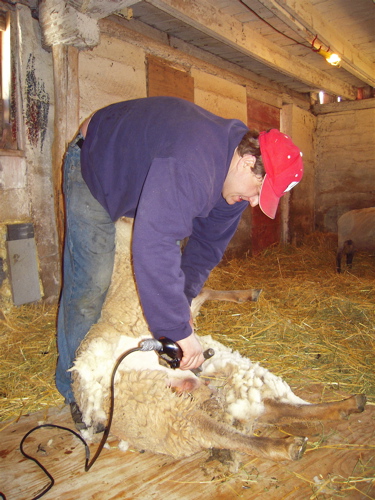 Here are the battling ewes:  Dorothy is the grey–the oldest of the herd and the one I have thought of as the lead ewe. Truffles is the brown one (a hair sheep, starting to shed on her own) with the white tail. Truffles is much younger (and the mother of White Dude) but is no shrinking violet. Willie faced her down on shearing day in a small, confined space and I was OH SO PROUD of him….Dorothy has just backed up and it starting to ram Truffles. 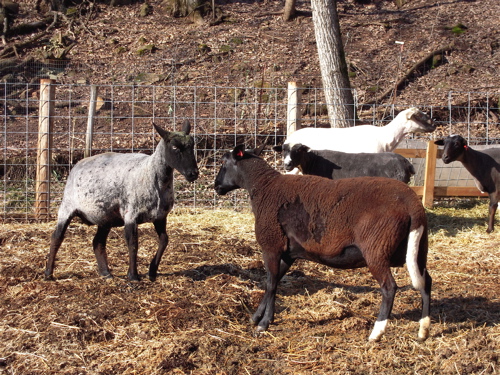 I the next photo the girls have rammed heads, and then slid sideways (I imagine to soften the blow a bit). Look at Truffles hind quarters, they are completely off the ground. Clearly she is not giving in much to Dorothy. 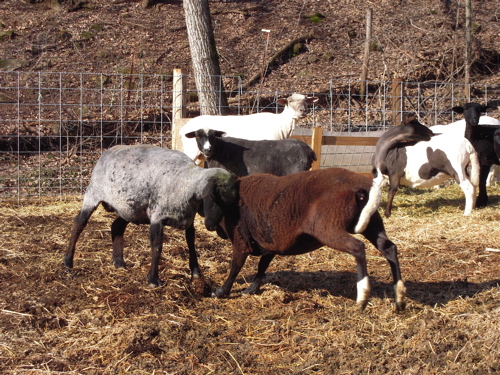 After 5 or 6 rammings, they began to just push against each other, and then would stand leaning against each other like tired boxers in a ring. What I love about this next photo is that the rest of the flock is watching just as closely as Willie and I were. (And the question, of course is: who won?  I’m not sure, although I’m sure that they are! I’ll keep watching….) 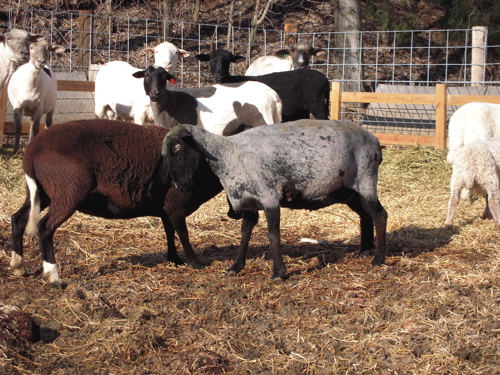