Welcome to an ongoing inquiry about the behavior of people and dogs.
Blog Home >> Animals and the People Who Love Them >> Willie Out of the Woods?

Whew. Paws crossed, it looks like the worst is over. It’s not quite two weeks after surgery, and Willie, Jim and I are starting to imagine normal life again. It’ll be awhile still, but Willie’s incision finally has healed enough that we no longer feel a need to watch him, literally, every second. We watch him carefully, but are actually able to take our eyes off of him for a few seconds at a time. Ah, the freedom!

That wasn’t true for the last week. I turned down the cone offered by the vet clinic, in part because I hate them, and in part because I knew that dogs scratch their bellies with their back paws, and a cone would have no effect. Right on schedule for internal stitches, Willie’s incision began to itch around day 4 after surgery. However, instead of ending on day 8, Willie had a one-inch area at the top of his incision that didn’t want to heal. It was the end of the incision, where all the knots are, and right under his breast bone. It looked a bit nasty after the rest of the incision looked great, and it was obvious that just one quick movement or scratch would open it up again. Jim and I took shifts sitting beside him every second of every day for much longer than we thought we would have to.

But we were lucky, because we could go off duty around 10 pm at night.  Willie goes to sleep sooner then we do now, and after waking up multiple times during the night while sleeping beside him, I found that he slept soundly until around 5 AM. We woke him up before that and he never had a set back during the night.

We of course covered Willie with a variety of outfits, from my tank tops to Jim’s T-shirt to the surgical suit below. We think he looks rather elegant in it, and he seems 100% comfortable with it on. I’m glad we ordered the suit, (thanks to a comment from a reader), although I should mention that I’m not sure it provides much more protection that the T-shirts we used. It’s relatively thin (needs to be able to breathe) and wouldn’t stop one swipe of a back paw from harming a vulnerable incision. It is a bit harder to hike up when you take your dog out to pee than a T shirt, but if you forget completely to move it in any way, your male dog will pee right into it anyway. I did that research this morning for the good of the village. You’re welcome. (It’s currently in the sink soaking in urine deodorizer. Back to the T-shirts.)

I’m sure we’d all love to hear more about what anyone else out there has done to keep a dog safe after surgery, especially during the challenge of the itchy, healing incision. One quick additional comment about cones: If the issue is a dog chewing on a sore or incision, I much prefer the inflatable, “donut” collars for dogs over the old-fashioned “Elizabethan collars”. If the latter works better for you, I’d suggest getting one that is clear plastic.) 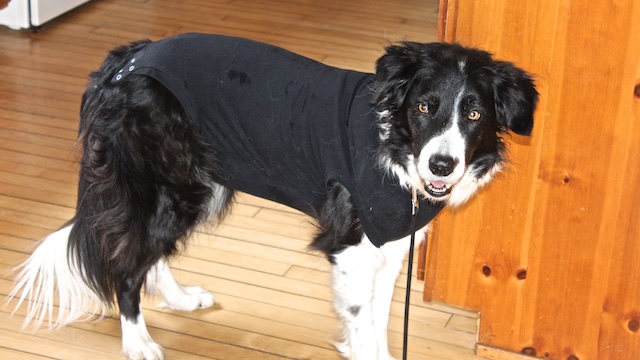 Of course, as many of you well know, it’s still a long haul. He’s still on leash all the time, because his normal behavior of “front paws up on the couch for head rubs” is not safe yet. Also, though the discharge instructions were “Leash walks only for 3 weeks, then back to full exercise,” (?!) I’d never let him go from zero to sixty without anything in between. He’s eleven and a half after all, and there’s no doubt he’s lost a lot of muscle tone. We’ll start longer leash walks this week, then a bit of trotting by next weekend. I’ll gradually increase his exercise and doubt I’ll let him back to his regular life as a working sheep dog in less than 6 or 7 weeks. But hey, Jim and I actually went out of the house last night. Together. Wonder of wonders. And some day I’ll actually get to sleep with my husband again.

This last weekend had some other wonderful moments, including getting to meet the new Great Pyrenees pup of friends Beth and Gary V. He’s only 14 weeks old, but it sounds like he is bomb proof and as good as prospect as a therapy dog as a puppy could be. What a sweet heart. No, I don’t want another Pyrenees. I don’t want another Pyrenees. I don’t want … (I do, but I don’t. I decided long ago never to get a dog I can’t pick up, after I couldn’t lift Tulip, our last Pyr, into the car during a medical crisis.) Thank heavens the beautiful Luccianno is not far away! 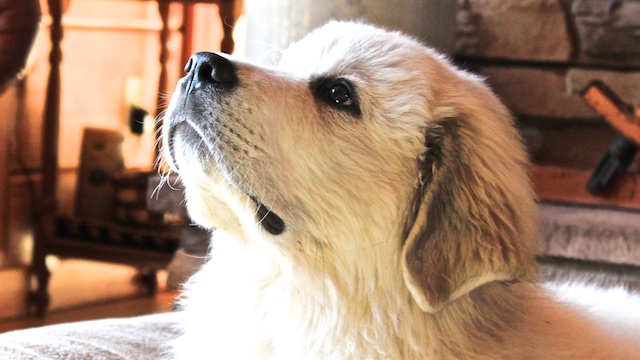 One more photo of another of Beth and Gary’s dogs—this is Tundra, a Golden/GP cross, who slapped a big paw onto my arm years ago and took a little piece of my heart into hers. 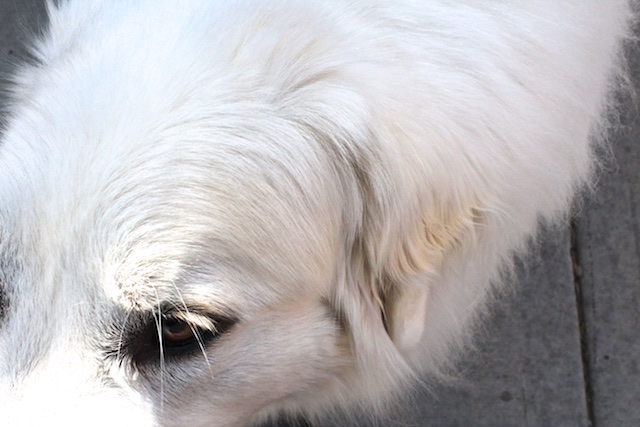 That’s it for today. Between Willie care, working on a talk on resilience for the Penn Vet Working Dog Conference coming up soon in Philly, (fascinating topic, will write about it here in a few weeks), arranging a raft of talks for the rest of 2018, etc etc, I’m full up.

May all your news be good this week. Here’s to how lucky we are to have dogs in our lives.

« Help for “Reactive” Dogs
Are We Doing Enough for Our Dogs? »