Welcome to an ongoing inquiry about the behavior of people and dogs.
Blog Home >> Herding Dogs >> Willie versus Redford, Round 3

What a difference a day makes. Here’s what happened late last week between Will and Redford: 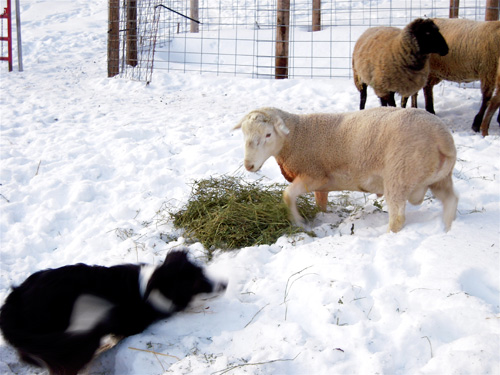 And here’s what I really don’t understand. After that, every time, Will has won every interaction. Will walks forward with confidence, and Redford turns tail (now you know where that phrase came from!). I simply don’t know exactly what transpired between the two of them, but Will’s posture is now one of confidence as he approaches Redford. Only once, a few days later, did Redford turn to face Wilie and challenge him, and Will stood his ground, opened his mouth and snapped at the ram’s face. (Wish I had a photo of that!) That’s been all she wrote since then: Will stalks into the barn like Clint Eastwood, and Redford turns and walks away.

I’m not sure where Will’s confidence came from, although I do believe that being allowed to move freely when he felt threatened helped him gain some courage.  I didn’t correct him (Will) for running away at all, simply encouraged him to get back in, and I wonder if having the freedom to protect himself helped. (Although he’s always had that, I’ve never corrected him for running away when he was frightened.)

I am fascinated by the power of his increased confidence, and equate it with what we often call ‘presence’ in a human. People with ‘presence’ have so much power, but it is a quality that is hard to define and quantify, isn’t it?  And yet, hard as it is to quantify or identify, it seems to be something that is physical, a kind of physical manifestation of a self contained confidence in one’s self. I’ve seen other animals besides humans and dogs that I’d say have ‘presence,’ I’m thinking mostly of horses. And cats. Of course, cats! (Who could be better at it?)  Any one else? I’d love to know what you think.

Meanwhile, it’s brutally cold here. Beautiful, but cold. Two below this morning when I did the chores. I do love so much about winter, a cold, snowy day has an ethereal quality that is almost other wordly. There’s a purity and simplicity to it that is moves me in a way that is hard to describe. I’m reminded of the folks in Antarctica who talk about becoming addicted to the beauty of the place, when they’re taking about a place that is flat, white and black. Period. Sounds horrible… but, I think I understand something of what they feel; something about the primal nature of such purity that gets to you.

The lambs are doing incredibly well. Full, fat bellies all. I’ve been supplementing with goat’s milk, but the twins are becoming less and less interested. Snickers must be in full milk production, because they are thriving now, even in the cold.  I still can’t help but worry a bit; tomorrow it is expected to be 19 below, and that’s without the wind chill factor which is supposed to be dangerous because the winds are predicted to increase. Man, it’s cold enough now just at zero or so with a barely perceptible breeze.

Too cold for many photos (the camera battery froze before my fingers did, but it was a close call), but here’s one from this morning. Willie is getting the sheep up so that I can walk in with hay without getting run over. As he gets closer I’ll open the gate and spread their green, leafy hay out on the fresh snow. He’ll hold them off for me while I get it spread around, and then I’ll say “That’ll Do” (yes, Babe fans, we really do say that!) and we’ll both go back into the barn. He’ll sit at the gate to ewes with lambs while I freeze my fingers off smashing the ice out of their water buckets. I would never let him in with the ewes and lambs now; the ewes would be forced to attack to protect their lambs, and what’s the point?  So Will waits outside impatiently while I bottle feed and refresh the water buckets. Wish we could work the main flock more though… too much snow and oh yeah, too cold! 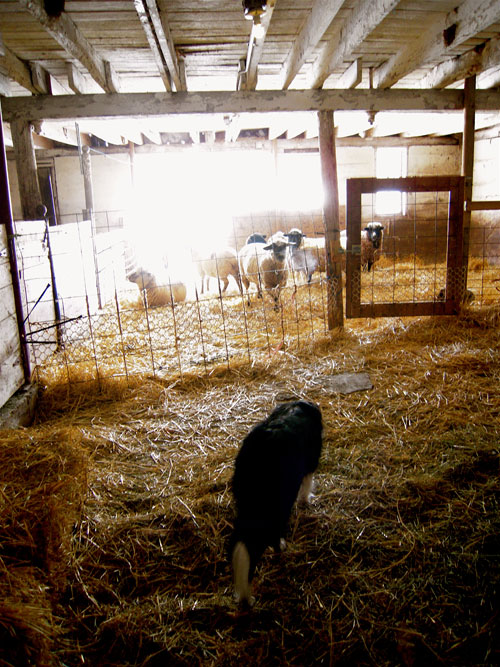 « The Redstart Rollercoaster; Lambs in Winter
Too cold; Feed the birds »