Welcome to an ongoing inquiry about the behavior of people and dogs.
Blog Home >> Dogs >> Willie’s New Toy

At the risk of sounding self-serving, I wanted to write about Willie’s new favorite toy. We do sell it on the website, but we sell it because our dogs think it is the best thing that happened since liver and chicken.

It’s called a Canine Genuis Brain Twister, presumably because it was designed for dogs who love to shake things. Truth be told, I’m not sure where the ‘genuis’ part comes in, nor does the thought of my dog’s brain twisting make me happy, but as luck would have it, Willie can’t read and pays no attention to such humanly concerns.

Here’s a photo of it: (I have one of Willie playing with it but forgot to bring the cord to connect the camera to  my computer. sigh. I’ll add the pic sometime soon when I can get my brain organized.) 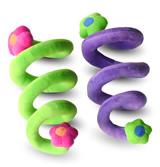 What you can’t tell from this photo is that it’s about 14″ long twisted and twice that uncoiled. It’s soft and plush and a great size for a medium or large dog. Willie has played with his relentlessly for a week and it, to my amazement, shows no signs of wear. Yet. Do not hold your breath. But I am interested in his response: he usually is a tearer and ripper… give him something he can disembowel and he’ll make quick work of it. I buy toys like that on occasion when I figure we both need a little luxury in life. He rips the $12.99 toy into shreds in 5 minutes, and I say “Well, it’s just as good as a dinner out!”  But one can’t feed one’s dog $13 toys on a daily basis, at least not if you still need some money to buy dog food, much less food for you and your family. This toy, because it is so fun to shake, doesn’t seem to bring out Will the Ripper. Yet.

I’ll keep you posted. We are big on toys this week at the office, and I’d love to know what new toys you’ve found that you like. Will and Denise’s Cooper are also crazed over another toy called Plush Leo With Stuffies (who comes up with these names anyway, she asked, respectfully?). It’s one of those great toys with toys inside of it. Will can pull the inner toys out in seconds, but he absolutely adores the toys inside. (He likes the carrot best. Such a healthy choice.) They are his favorite toy to bring to me to play fetch with him. They are also great for hiding (but also small enough that I’d be careful with them around large dogs….) 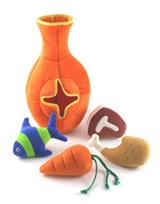 His other favorites are still the Chewber, Skinneeze, Planet Dog’s balls and a half chewed up rubber tube used by dairy farmers. I’d love to hear about your dog’s favorites…