Welcome to an ongoing inquiry about the behavior of people and dogs.
Blog Home >> Border Collies >> Words Fail, The Dog-O-Matic

I wondered if you have seen this — an automatic ‘dog washing machine,’ in which you put your dog into a metal box, streams of water and soap engulf him or her, then presumably the dog is dried with blasts of hot air.  Here’s a link to the Dog-O-Matic (sent to me by an alert UW student). I’m relieved to say it’s only in France so far, but honestly, keep your eyes peeled for it to show up in your area (and be ready to stop it!). Poor poor dogs!

Meanwhile, back at the farm, I promised I’d tell you what happened to Redford the Ram (and Willie). It was one of the accidents that come out of nowhere, in which everything is going according to plan, and then, surprise!  Redford had been split off from the flock, along with a neutered five month-old ram lamb to keep  him company. I needed to ensure that my ewes didn’t get bred early and deliver lambs in the depth of winter (like last year) so Redford and friend were moved out of the main flock, and into the orchard pasture up the hill from the house. We call it the orchard pasture because of the wild apple trees that used to punctuate the grass in spring with a flurry of white blossoms, and it is my favorite place on the entire farm. The sheep seem to like it too (that’s where the photo from the last blog was taken.)

I went up to practice Willie’s flanking whistles on Redford and lamb, knowing that they’d be a bit more flighty than the main flock because they were split off from them. The main flock is slow and pokey, so a bit more speed is good practice for me and Will.  But, Redford and friend weren’t a ‘bit more flighty.’  They were an ovine version of hysterical.  I sent Will to take them out of a corner, something we’d all done–sheep, dog and human–a gazillion times. However, rather than moving away from Willie and out of the corner, as usual, the ram lamb panicked when Will was a good 40 yards away, and turned and smashed his head into the fence to try to get out. Oh my… I love my sheep and hate seeing them frightened or hurt, so I immediately said “LIE DOWN”  to Will, and bless  him, he did. The lamb settled down and moved away from the fence a few feet, so presuming we were back to relative normal, I flanked Will and asked him to go around the sheep to move them out of the corner.

My mistake, because apparently the sheep weren’t as settled as I had thought.  Redford turned and, true to his name, rammed full speed into Willie, who stood up for himself without biting, bless him. It gets blurry from there… imagine two white shapes and a smaller black and white one, moving left, right, up and down at high speed for a few seconds. Somewhere in there, Redford took a tumble, and ended up with a bruised shoulder. He limped quite badly a few hours later, and I fussed all night worrying about him. I’m quite fond of him, and he’s valuable besides, so it felt important that he recover.

Good news, after two days Redford is as good as new. He’s going to some dear friends on Saturday morning, to live with their ram for the summer, and then we’ll both use him for breeding. I’ll let you know how the transfer and ram introduction goes. Unfamiliar rams can be very aggressive to each other.. think National Geographic and Mountain Goats.. and in some cases can even kill each other. Peg and I have no intention of that happening, I’ll tell you more about what we’ll do to prevent that in a subsequent blog. Meanwhile, here is one of Redford’s daughters, a lovely little ewe lamb from the good ewe Martha 2.0 (her face is behind the lamb). Martha is my oldest ewe and is beginning to breath in a labored fashion, so I’m waiting for a visit from the vet for her. She was born by emergency Caesarian section when her mother, the original Martha, died in delivery. Thus the name, Martha 2.0. Cross your hooves that it’s nothing serious… 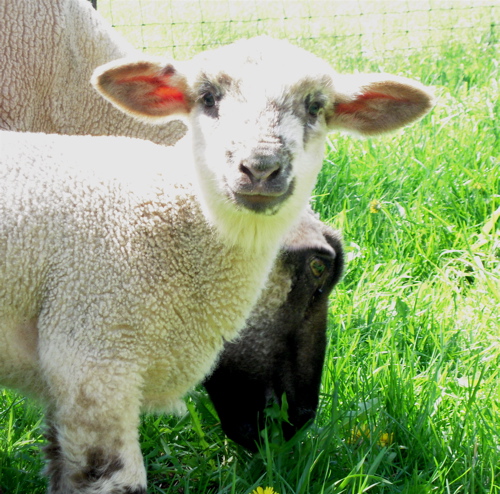