Welcome to an ongoing inquiry about the behavior of people and dogs.
Blog Home >> Animals and the People Who Love Them >> World Sheepdog Trials

The World Sheepdog Trials have come to an end, and what an amazing experience it was. Dogs, sheep, mud, sun, rain, mud, wind, sweet hot tea, a potpourri of languages, a sea of rain coats and rain pants, mud, inspiration, amazement, wellies, mud,  and dogs, dogs, dogs. You can learn more about them, and see all the results at 2011 World Sheepdog Trial.

The 16 dogs and handlers that ran yesterday in the finals were truly some of the best of the best. The sheep here are challenging: so reactive that my friend Peg who ran on the U.S.team and came over early to practice said it took her 3 days to be able to drive them in a straight line (and that’s saying a lot, she was on the World Team for heaven’s sake!). The course was a killer: with the first outrun about 450 -500 yards up a hill to the right, then the dog leaves those 10 sheep and “looks back” to run a half of a mile (yes, really, I”m not exaggerating) to the left to gather another 10.

Here is a dog bringing the first group toward the fetch panels (the sheep have to be brought in a straight line to the handler, through a set of free standing panels). You can just barely see where the second group of sheep are set out: count 4 trees from the left; the sheep are set out beyond the hill you can just see in the background. 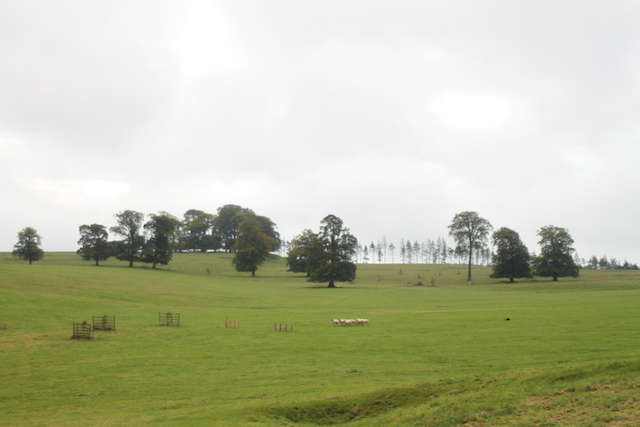 Several dogs needed help from their handlers (in the form of extra whistles, each of which loses you some points), but all the dogs found each set of sheep. Then the 20 sheep were driven through two drive panels about 200 yards each away from the handlers. Then the fun began: 5 sheep of each 20 had orange collars on. For the “International Shed” as it is called, the team is to split out the uncollared sheep from the flock. Doing so takes an incredible amount of team work between the dog and the handler. The dog’s job is to keep the orange collared sheep back, the handler’s to split off the uncollared ones. Of course, the sheep haven’t read the program. You may get a collared sheep who is determined to join the others who have left already, or an uncollared one who is the lamb of a collared. You get the picture, it’s terrifically difficult. The handlers have to know sheep as well as their own species, and be able to know what the sheep are about to do before they do themselves. The dogs have to be both split-second obedient and also to make a great many decisions on their own. The pressure on everyone is enormous.

Here’s part of the shed with Serge van der Zweep and Eve (who came in 2nd). You can see how Eve is holding the collard ewe back.  The already split off uncollared ones are off to the right. 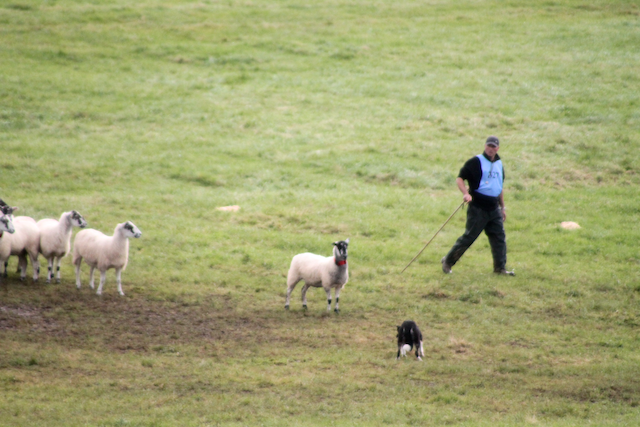 Here Serge has manuevered the sheep so that an uncollared one is in the right position to split it off and he is moving toward it to push it off. See how Eve is still focused on holding the collared one back. A perfect example of teamwork. 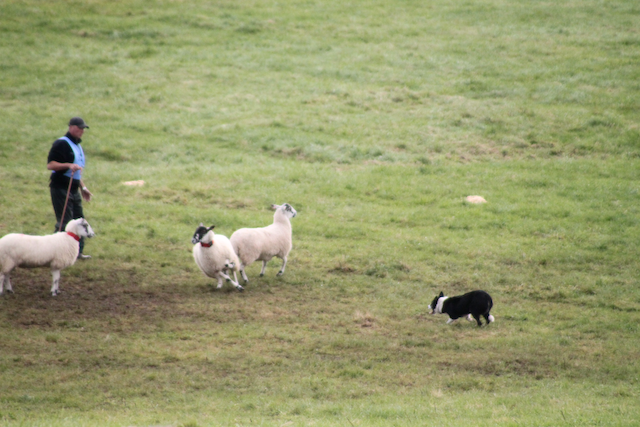 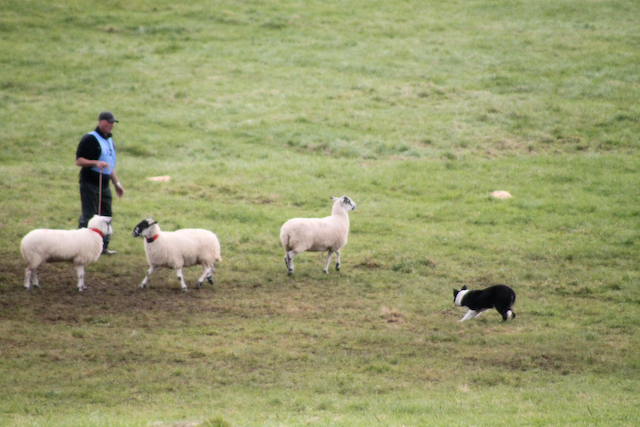 If the shed was successful (often it was not, the team of handler and dog could spend 15-20 minutes in the attempt and then run out of time. At the end of the day the sheep got more difficult to work, and several dogs ended up “gripping,”which is an automatic DQ. None of the “bites” were seriously, one was actually no more than a muzzle punch, but rules are rules and regettably both US handlers were DQ’d because of grips. Tommy Wilson had a brilliant run going, and was almost done with his shed before his truly lovely dog Sly ended up in trouble at the last minute. Darn!)

If the sheep were successfully shed, the sheep had to be penned. Four judges added their scores together, and the overwhelming winner was a break your heart run by James McGee and Becca from Ireland. We saw the run in detail on a television special Sunday night (complete with slow mo, close ups, and fantastic camera work) and it was as beautiful a thing as I’ve ever seen. Best of all was the obvious love between James and Becca during an interview afterwards. They pure and simply adored each other, and it was a wonderful thing to see. As in all dog-related endeavors, not all the handlers are as kind to their dogs as I wish they were, but James absolutely glowed with his love for Becca.

After each run, field workers sent their dogs to pick up the sheep. We managed a good spot at a fence (not an easy task, since we were the only ones there without Wellies and had to wade through lakes of mud in our traveling shoes). But it was worth it, we had a good spot to watch and a great advantage point to get some photos of the ‘pick up’ dogs working the sheep off the field.

We’re off now for a train to London. What a switch that will be! I’ll write another blog when I can get back online with some photos of the area. The Lake District of northern England is drop dead gorgeous.

« The animals of the Holy Isle
Part Wild: Book Review and Ode to Dog-ness »