Welcome to an ongoing inquiry about the behavior of people and dogs.
Blog Home >> Dog Books >> You can teach an old dog new tricks, The Diane Rehm Show

Here’s a question for you, based on a column I’m writing for The Bark magazine. The editors asked if I’d write a column about “training old dogs.” (The column on training male versus female dogs will be in the next issue… stay tuned!). The question: how does your training vary (or does it?) once your dog becomes geriatric? I’ve started the column already: “Lassie doesn’t sit anymore, at least, not when asked.” I’m basing this introduction on the fact that about six months ago, my 15 year old Lassie looked at me blankly when I asked her to sit.

She’s going deaf, so I thought perhaps she didn’t hear me. I gave her our usual visual signal. Nothing. Then I lured her down with a piece of food. She looked up at my eyes and stared at me. And rather than trying any longer, I thought: “Oh, I get it. Either it hurts her to sit (she’s named Lassie for a reason after all, and basically did everything and anything anyone asked for 14 years) or she’s just simply done performing now that she’s the equivalent of a 90 year old woman. Sort of the canine equivalent of “When I am old I will wear purple.”

Here’s the thing. I treated it completely differently than if it had been Willie. Basically, although I’m still teaching Lassie some new things, which I think is good for her, I’m giving her a lot of ‘old dog’ passes. She is almost deaf, losing her sight, playful but frail and I suspect that her mind feels a little fuzzy sometimes. What do you think? Do you give your old dogs ‘passes’ too?

On the home front, it was 10 below this morning and windy. I’m going to keep this short because Lassie was so cold outside I’m not sure she even peed last time I took her out. I’m going to run home to let her out again. Thank heavens I got in and out of Washington DC between storms. It is absurd here… 10 inches Friday (totally snowed out of my office, couldn’t even think about leaving the farm), more the day after and now they’re predicting a total of another 13″ in the next two days. Geeeez. Being on the Diane Rehm show as without question the highlight of the month. I unabashedly adore her, although I realize such praise is terrifically uncool (“don’t gush” a producer said to me once). She is the best interviewer I’ve ever worked with, and the fact that she was such a supporter of my radio show is a great compliment indeed. Here’s a photo of her and her Maxie, who amused us all by playing with the toy I’d brought while we did the show. 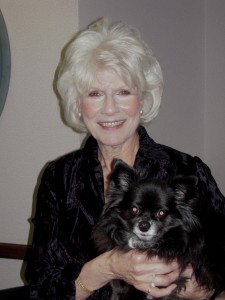 And here’s Will, who unlike me and Lassie, seems oblivious to the cold. Ah youth! 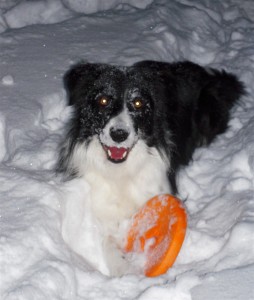