Welcome to an ongoing inquiry about the behavior of people and dogs.
Blog Home >> Dog Behavior >> You Can’t Reinforce Fear; Dogs and Thunderstorms

It thundered last week during a rain storm, and it reminded me how much trouble a storm can be in the life of a dog (and for those of us who love them.) Since thunder season is approaching, this seems like a good time to talk about one of the oft-repeated, and ever-so-inaccurate pieces of advice handed out to dog owners: “You mustn’t pet your dog if he runs to you because he is afraid of thunder.”

That’s just wrong. Totally and completely and utterly wrong, but it has gathered gravitas, as things often do, because it has been repeated over and over again.

There are several reasons why that advice is wrong, here’s one of them: Fear is designed to be aversive, that’s why it is an effective way of affecting behavior and keeping animals out of trouble when they encounter something that might hurt them. Fear is aversive enough that no amount of petting or sweet talk is going to make your dog more likely to shiver and shake when she hears thunder rolling as the clouds billow and the rains begin.

Here’s the example for you of how hard it is to “reinforce” fear. What if someone tried break into your home in the middle of the night? Let’s say they did, and after the intruder left, a friend or loved one sat down with you on the couch, brought you tea and gave you a hug. Would the tea and sympathy make you more likely to be afraid if it happened again the next night? Of course not.

Can you imagine someone saying: “Well, I understand that you are frightened, but I’m going to ignore you because any sympathy that I would give you might make you more likely to be frightened if it ever happens again.” I don’t know about you, but that would be my EX friend.

One could criticize this example as one of misplaced anthropomorphism, but the fact is that this process works much the same in dogs as it does in people. The fact is, it is almost impossible to “reinforce fear.” Fear is highly aversive, and if anything, it works in reverse. I suppose, if you did it often enough, you could create an association between thunder and petting that would make your dog afraid of petting, but it is extremely unlikely to go the other way around.

It is true that you can make your dog more afraid than he already is, by doing something yourself that scares him, by forcing him into situations that scare him already or by being afraid yourself. Emotions are contagious, so if you want your dog to be afraid of thunder, then be afraid yourself! But you’re not going to make him more afraid of storms if you stroke his head and tell him it’s going to be okay.

The bad news is that petting won’t help (him or her) much either, so I’ll write next time about how to help a dog who is thunder phobic, but you might also find some ideas in The Cautious Canine, a booklet I wrote about helping dogs conquer their fears in humane and effective ways. I also wrote about why it’s okay to pet your dog when he’s scared in Bark Magazine in October of 2008, and more recently Pia Silvani wrote a GREAT article about it in this month’s APDT Chronicle.

Speaking of emotions, here’s a photo of a boxer with a lot of expression on his face. What emotion would you ascribe to it? 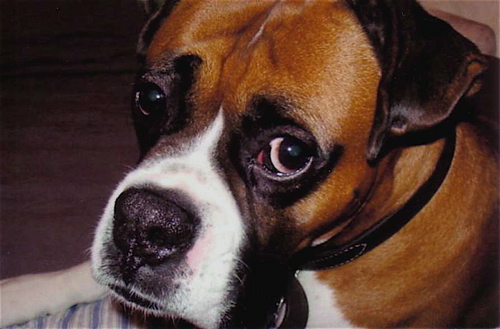 « Come to Africa with Me
Tulip’s Tulips »