Welcome to an ongoing inquiry about the behavior of people and dogs.
Blog Home >> Animals >> Your Dog Has a Brain in His Gut

No, seriously. And so do you. No kidding. I’m so interested this, a relatively new discovery about what’s called the Enteric Nervous System, that I wanted to write about it today. I’ll get back to emotions in dogs soon, but I’m in the Oh Wow phase of this information, and wanted to share it. (Granted, this is not new information to the researchers who have been studying what’s called the ENS for decades, but the information does seem to be leaking out slowly. No pun on ‘leaky gut syndrome’ intended…)

Here’s the deal, and here’s how it relates to our dogs and their behavior. It turns out that there is a vast network of neurons–that’s right–neurons–in your intestines. 100 million of them. Of course, your brain has 100 BILLION, but still, that’s impressive.  Neurons were supposed to be nerve cells that only existed in the Central Nervous System (CNS), the brain and the spinal cord. But it turns out that there is a network of neurons in the gut designed to integrate the outside world with the inside of a mammal. As you remember from Biology 101, every mammal is designed like a doughnut, with surfaces both external and internal that are in contact with the “outside” world. Your skin and respiratory passages interact with the external world on the outside of your body, and the inside tissues of your stomach and intestines interact with things from the external world on the inside of your body.

It appears that the ENS is actually the origin of coordinated nervous activity. It links directly to the emotional aspects of your CNS, and is believed to actually be the precursor of it. Thus, your gut and your emotions are indeed linked directly together, as a way of helping the body make decisions about its behavior. All this relates to our lives and the lives of our dogs in two ways. First, “comfort food” really is comforting. Your ENS communicates directly with the emotional centers in your brain, and certain types of food really do make people feel less stressed and more calm. Studies show that high fat, energy rich foods reduce stress in lab mice, and that people feel soothed by mac and cheese even if they don’t know what they are eating and it is placed into their stomach via stomach tube. Bottom line: What mammals eat directly effects their emotions. Thus, perhaps some of us are not so crazy to feed our problem dogs selectively?

Here’s the big question related to this that I have for blog readers, which relates to the large number of dogs I’ve worked with who had both gut and emotional problems. How many of you have seen dogs who have digestion problems who also have behavior problems related to emotional control (especially fear). Willie is the perfect example: He came as a young pup with projectile diarrhea, a pathological fear of other dogs and a dysfunctionally high level of  sound sensitivity. I can’t tell you how many dogs I’ve seen as clients who had both problems, and whose treatment ended up effecting both systems.

One of the treatments for Willie was to put him on probiotics, and the article that got me thinking about this topic (Psychology Today Dec 2011) relates research that has found that probiotics reduce anxiety in some types of lab mice.  They do specify however, that it might be specific types of lactobacillus that were effective, so we don’t know yet that generic probiotics are always useful. I can say that I suspect they helped Willie, not just with his gut but with his fears, but that’s just speculation.

What about you? Have you seen a link between dogs with emotional problems and dogs with intestinal challenges? Do you have a dog that fits that description? If so, what have you done? For Willie, I used probiotics and switched him to what are considered to be cooling foods in Chinese Medicine. Of course, one obvious problem for some dogs are food allergies, which also have to be considered (but did not seem to be the case with Willie.) I’d love to hear your feedback on all this. I’d write more myself, but I have to go eat some mac and cheese.

MEANWHILE, back on the farm: Cold but sunny, such a joy! No snow, which is unusual but not rare. In 2008 we had 16+ inches by now, in another year just a few. But no white winter for us so far, and going to be cold cold cold Friday night (high of 6). I wish we had snow to protect the plants, but that’s just the way it goes. In the interim, I’m loving the sun.

Good news with Willie boy: After a set back last weekend (limping pretty badly after he got up), I decided to drop all his exercises as an experiment to see how he’d do. He’s doing great! I think I’ve figured out which exercises cause him pain and will talk about it today with Courtney at UW Phys Therapy. Even with no limp, he doesn’t use his left leg normally, he hikes up his shoulder too high, but that mechanical issue doesn’t seem to cause him any pain as best I can tell. So this morning he got to play free with his old, beat up plastic disc. I don’t throw anything for him, may never again, but still, he was sooooo happy. Me too! 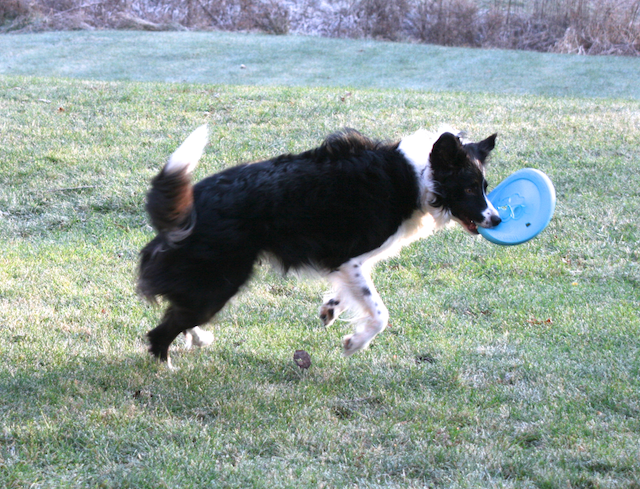 Tootsie is doing great on her recalls. I’d say 90%, which I think is great for a Cav after less than 3 months. After a number of mouth-open, shiny-eyed recalls this morning, I ran back into the house for the camera to take a picture of her with her ears flying as she runs to me. I got the ears flapping, but such a serious look on her face!. 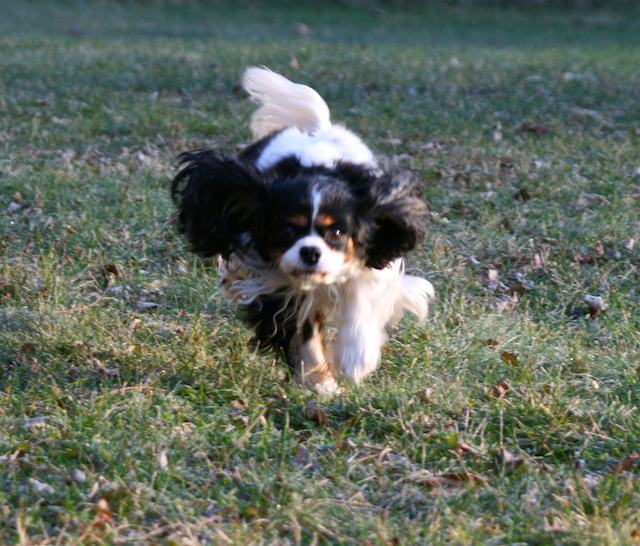