Welcome to an ongoing inquiry about the behavior of people and dogs.
Blog Home >> Animals >> Do Other Animals Keep Pets?

A colleague just sent me a link to one of my favorite science and behavior blogs, that of Harold Herzog, the author of  Some We Love, Some We Hate, Some We Eat: Why It’s So Hard to Think  Straight About Animals. I use his book in my University class, The Biology and Philosophy of Human/Animal Relationships,” because the author is thoughtful, knowledgeable and one of those rare scientists who writes beautifully. If you find the topic interesting and haven’t read his book yet, pick up a copy. I highly recommend it.

The book includes a section on pets, and his recent blog addresses that issue as well; in this case, whether a video-gone-viral about “Baboons Keeping Dogs as Pets” accurately depicts the relationship between individuals of these two species. If you haven’t seen it yet, the video is included here, but before you watch it I want to give you an alert. Or a warning. The video begins with a male Hamadryas baboon grabbing a puppy by the tail and dragging it, squealing and screaming, across a bumpy field of rocks. It’s not fun to watch, and if your empathy quotient is set on “super sensitive,” just skip the first two minutes and watch the rest.

There are two issues here that I find especially interesting and thought would be interesting to you as well. One is the obvious question: Do baboons really keep dogs as pets? And even more interesting I’d argue, do any animals other than humans keep dogs as pets? Herzog has gone on record that, in spite of the exceptions of some captive animals like KoKo the gorilla’s pet cat, and the YouTube sensation of a grieving orangutan who formed an inseparable relationship with a hound dog, there are no credible records of any wild animals actually having what we would call a “pet.” If you’re interested in this dialogue, I’d read Herzog’s blog about the baboons first, including the comments, then come back here.

There are a lot of valuable nuggets of information in this article, in part because of Herzog’s dedicated attempt to discover the truth behind the breezy assumptions of the documentary from which the video was taken (Animals Like Us). Because the baboons and some dogs live in association in a garbage dump, and because the baboons sometimes groom the dogs, it is assumed that the baboons “steal” puppies with the intent of keeping them as their pets. But how do we know why the baboons grab puppies? If you watched the beginning of the video, you’ll have noted that the baboon licks the puppy’s anus before releasing it. Why? Familiarizing itself with the pup’s scent? Looking for lunch? Maybe baboons like poop as much as dogs do. And why is it only male baboons that do the “kidnapping?” I find that fact one of the most interesting of all. Usually it’s females that first keep individuals of another species around to comfort and be comforted by.

The question of what is happening in this particular troop of baboons is interesting enough. However, it brings up the larger question that I asked above: Do animals other than humans keep “pets.” First and foremost, I’ll argue, we have to define what we mean by pet, and already the waters get murky. Standard definitions of “pet” are “any domesticated or tamed animal that is kept as a companion and cared for affectionately” (Dictionary.com), and “a domesticated animal kept for pleasure rather than utility” (Merriam-Webster Dictionary). Herzog himself defines a pet as a member of other species that are being kept for an extended period of time, for enjoyment.

Of course, “enjoyment” can mean many things. We call a dog kept in a small kennel in the back of someone’s yard a pet, even if it’s only taken out during hunting season. We call the dogs of others who live in the house, sleep on the couch and have their own acupuncturist pets too, yet their lives, and their “purpose,” are significantly different. On the one hand, both of the animals are being “kept for enjoyment,” one because the hunter presumably enjoys hunting and the other because of a close social connection. On the other hand, the key to “petness” and “non-petness” appears to be “utility” versus pleasure, yet the kenneled hunting dog appears to be kept primarily for utility.  Thus, when asking if other animals keep pets, it’s useful to remember that the concept includes a wide range of relationships in our own species.

Perhaps one perspective when asking if non-human animals (in the wild) ever keep “pets,” is to look at the evolution of pet keeping in our own species. Surely our first, close relationships with other species weren’t for the pure joy of petting their fur. How much was utility and how much pure “pleasure?” I’d guess those things weren’t particularly black and white.  And our relationships still vary widely. In many areas of Africa now, a Masai village for example, dogs live in close association with people, but I doubt they would fit the definition of a pet. The only time I ever saw one “petted” was when tourists asked about the dog, and a Masai grabbed one and posed for a photograph. Believe me, the dogs did not look like they were enjoying themselves. When I asked, the Masai told me they had the dogs because they barked when lions approached the edges of the thorn fence that enclosed the cattle and the tribe at night. When I asked them, one at a time, if it was “their dog,” each individual said yes, it was “their dog,” although none had a name for the dog and the dogs did not come when called.

I’d love to hear your thoughts on this topic. Clearly all I’ve really done here is asked some questions, not answered any. But that’s part of the fun of being a human, right? A few starter questions: What makes a dog a pet? What is the boundary line that makes a dog absolutely not a pet? Have any of you seen anything you’d call “pet ownership” in one of your own dogs? Horses?  (Here’s a key question: What’s the difference between 2 individuals who are socially bonded, and one being the pet of another? Clearly it is something related to autonomy, and who feeds and takes care of who, but how clear is the dividing line?) Here’s another blog post on Primatology to whet your whistle….

MEANWHILE, back on the farm: Rain! More and more of it. Not a lot, about a quarter inch two days in a row on the farm. We’re still a good 8-9 inches behind average, being in a seeming rain shadow and getting significantly less rain than just five miles away. But the grass that wasn’t killed is growing, the sheep are on pasture instead of hay right now, and I’m no longer dragging huge, heavy hoses around every day. Even better, Willie and I are working sheep every day. Last night we drove the flock up into the “high pasture,” and I split out a few to practice driving the sheep in a straight line away from me. (Like any sport, it looks easy when the pro’s do it, but in reality the sheep want to go right, then left, then right… my lines look more like big zig-zaggy zippers than straight lines, which is why I need to practice so much.)

The small group we split out to work on included a lamb who’s mother was in the other field. The draw to mom was much stronger than the pull to the rest of the flock, and lamb-boy kept Willie on his toes, repeatedly trying to dash away and run off to mom. Willie had to turn on the speed to stop him over and over, and yet he never lost his temper and threatened to bust in. Good boy Willie. This morning he had another test: Lady Godiva was not interested in moving where I wanted her, and continually took her two lambs away from the flock and attempted to dash back to the barn through the woods. She wanted to go right, and the rest of the flock wanted to bolt left.  I needed them somewhere in between. When Willie ran around to stop Lady G, he risked losing the rest on the other side. He did a great job of alternating between both sides, good boy again. And now it’s time to get the heck out of the indoors, and go outside with Willie again.

Here’s Willie an hour after I wrote the above, working another group I’ve split off from the bunch. This time it’s a ewe, Butterfinger who wants back to the main flock. In this first photo I’ve sent him around to stop her and bring her back to the group. 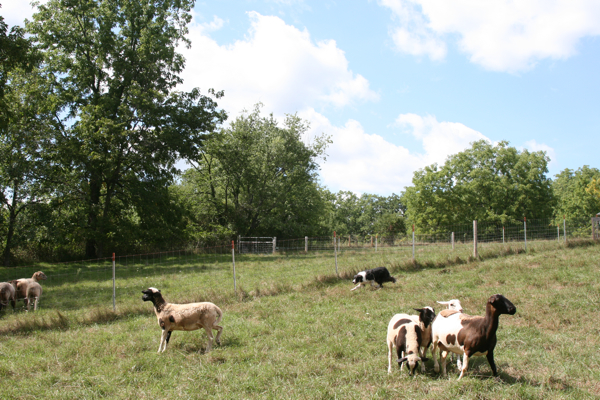 Notice how in the photo below she is already shifting her weight back away from Willie? Notice her head, her left foreleg position and her weight shifted backward instead of forward. 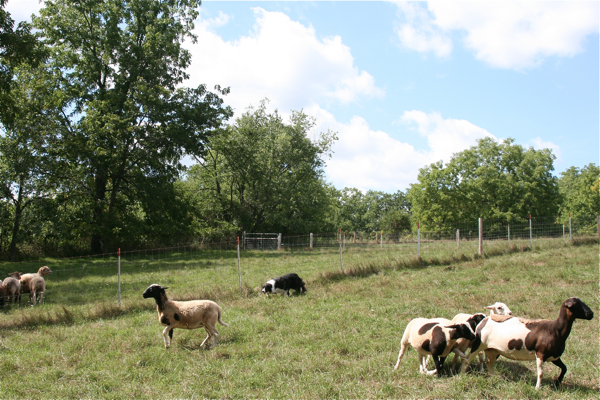 Now she’s headed back to the right group. Immediately after I took this Willie turned in toward her. He sometimes stops short, so I was pleased he “covered” her. 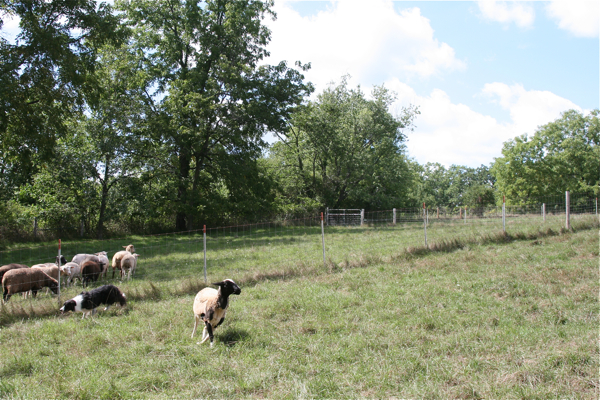 And below is the final photo, Butterfinger grudgingly going back to the small group for us to work awhile. Willie is moving faster than I normally would like, but in this case I let him take charge. This exercise puts a lot of pressure on a dog, and I wanted to take the pressure off for a second. Never fear, all the sheep got back together again soon after. As a matter of fact, they’re bawling at me right now… time to give the lambs their handful of grain and the ewes a tiny bit alfalfa hay just to spoil them. 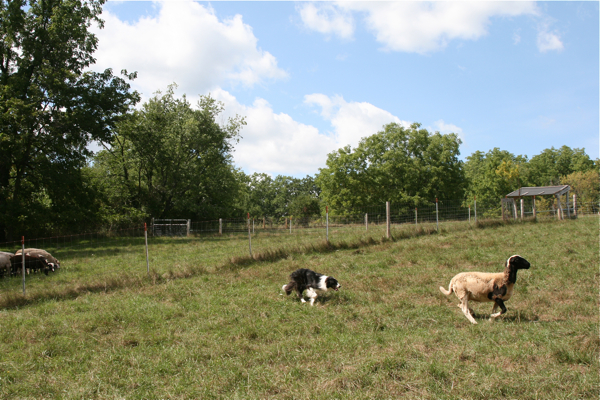 « The Ten-Year Anniversary of OEL
Better Together DVD Combo »