Welcome to an ongoing inquiry about the behavior of people and dogs.
Blog Home >> Dog Behavior >> “Listening” to our Dogs

Yesterday something happened with Willie that reminded me of something most of us already know. . .  the fact that our dogs are continually trying, often desperately, to communicate with us. They can’t use words, they don’t write letters and, thank god, they can’t twitter. But they live in constant contact with members of another species, a species that can either ignore their efforts, or fine tune their abilities to translate what their dog is trying to “say.”

Here’s what happened with Willie: Lassie,  Will and I had just finished a lovely country walk with friends (two and four-legged) and were chatting outside of the house of the mutual friend who owns the property. Picture: three people talking outside of the house, three dogs at their feet, and Willie, the 4th dog, hanging out, fifteen feet away. Willie began to leave the area and walk down a path edged with tall prairie grasses. He quickly moved out of sight, and since there was a wandering, unaccompanied two year-old child in the area, I wanted to keep an eye on him. I called him back and asked him to stand and stay. He did, until I turned my head for a few seconds toward my friends. When I looked back, Willie was gone. I called him back again, told him to sit and stay.

You guessed it. The second I turned my head, Willie was gone again. This continued one more time, which was atypical of Will. Heaven knows he has his problems, but this isn’t one of them. I called him back again, a tiny bit frustrated but mostly confused. Will came up the path and I said something like “Will? What’s going on?”

I wish more than I can say that I could show you a picture of his face when I said that. (WARNING: Anthropomorphic attribution to follow.) What I saw in his eyes was an honest, pleading look that I read as “PLEASE PLEASE DON’T MAKE ME STAY HERE.” His look was so intense I practically have tears in my eyes writing about it. (Okay, I actually did get teary as I typed that, but just for a minute and not very much and just don’t tell anybody, okay?)

“Willie, do you want to go to the car?” I asked, and he turned and ran to the car. I followed him through the prairie grasses, and found him at the car door, looking back and forth between it and me, like Lassie in a movie with Timmy trapped in the well. I put him in his crate and walked back to Lassie and my friends. As I did, I remembered that TWO YEARS AGO, the dog we had walked with today went after Willie over a stick in exactly the same area. There was no contact at all, but an impressive bark/charge that clearly scared Will (he urinated as he rolled over submissively). There has been nothing between the dogs ever since, but they used to play lots of chase games together, and now they don’t.

Will, alpha-wanna-be that he is, will always be a dog with a lot of fears, and as he matures, he tries to hard to find ways to stay out of trouble. He avoids situations of conflict and he play bows frequently (I taught him to do that to help him relax; he does it often now, I think because he’s learned it is a way of managing tension). I can’t help but think what it would have been like for him if I had interpreted his behavior after the walk as a “challenge to my dominance.” What a nightmare for him, and what a betrayal of our relationship that would have been.

This story reminds me of the first time I saw Sandra Davis and Pepper do freestyle. As the music began, Pepper left her side for a few feet and raised his nose up into the air. Instead of correcting him, Sandra stopped the music and said “Pepper, what is it?” She let him move across the floor, sniffing something in the air intently. When he appeared satisfied she called him back, cued the music to start again and blew away the crowd with an awesome performance. I never will forget that reminder to us all to respect our dogs, and to listen to what they are trying to communicate. [By the way, I talked about this once in a seminar in New Mexico, and someone in the audience said “Sandra is right here!”  And there she was, in the audience, and I got to thank her in person. What an honor.)

Meanwhile, back at the farm, I continue my crazed, obsessive gathering of summer’s bounty. There are now 12 quarts of black raspberries in the freezer, along with heaven knows how many packages of strawberries, rhubarb and now cherries that I picked from a generous friend’s tree yesterday. This weekend I’m going after Blueberries at an organic farm down the road. I made a Blueberry, Strawberry, Raspberry pie yesterday. This ‘eating locally and seasonally’ sure is fun and ecologically a good thing to do, but it’s not helping me control my waistline. Tonight I take a rest for harvesting, and take Will to work sheep at a friends. Oh boy, she has a huge field so we can try a 300 yard outrun. Oh boy, can’t wait, I’ll keep you posted.

Here’s Will and Lassie this morning, chewing on their stuffed Kongs, and illustrating for all the world to see that I didn’t vacuum the rug this weekend. 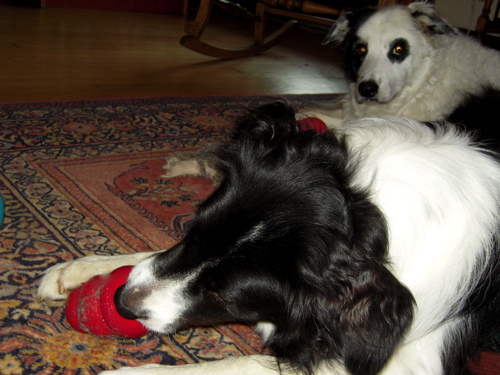 « Behavior Modification versus Management
Willie gets in over his head »