Welcome to an ongoing inquiry about the behavior of people and dogs.
Blog Home >> Animals >> The Ten-Year Anniversary of OEL

I was recently reminded that my first national book, The Other End of the Leash, was published in June of 2002, ten years ago (thank you Lisa). Wow. Ten years. It feels like a long time, and it feels like the years have flown by. Time is like that.

There’s something about big blocks of time and anniversaries–10 years, 25 years–that helps us to step out of our busy lives and look at the big picture. This feels especially relevant to me now as I work on a memoir. I find myself asking what parts of the book still resonate most for me, and what aspects of the book most relate to what I want to say in the memoir. At the moment there are two things that stand out the most: how understanding the world as best we can from a dog’s perspective enriches our relationship, and how dogs are such a vital, essential connection to the natural world for so many of us. Here’s how I described that connection in The Other End of the Leash:

“We humans are in such a strange position–we are still animals whose behavior reflects that of our ancestors, yet we are unique–unlike any other animal on earth. Our distinctiveness separates us and makes it easy to forget where we come from. Perhaps dogs help us remember the depth of our roots, reminding us–the animals at the other end of the leash–that we may be special, but we are not alone. No wonder we call them our best friends.”

It’s true that our differences from dogs causes no end of problems, from people mindlessly hugging dogs who perceive it as a threat, from running toward a dog to get him to come to us when in reality it causes him to stop. One of the most gratifying consequences of the publication of The Other End of the Leash is the receipt of notes and emails from all around the world that thank me for helping them to better understand their dog, or to save a run away dog from being hit by a car. (The book, I say sheepishly but unable to stop myself, is now published in 14 languages–or is it 15?–a fact that continues to delight and amaze me.) I still love playing the “contrast and compare” game between dogs and people, asking what is the same and what is different as a way of enriching our relationship, and I being one voice, in a chorus of many, asking dog owners to respect and understand their dogs, rather than dominate and treat them like small, furry  people trying to take over the household if you drop your guard for just a minute.

I also appreciate, even more now I think, the importance of a dog’s ability to link us to rest of the natural world. It’s a tragedy, in a way, that we speak about ourselves and “nature” as different things, as if we moved isolated and above all the rest of creation. We don’t. We still need air and water and food to eat and a place to poop like other mammals. Almost as much as that, our spirits need to see leaves fluttering in the breeze and the sun shine off the water. We need to marvel at the intricacies of a daisy and the jazz riff of a house wren as she sings beside her nest. There is a growing body of evidence that being outside, in the “natural” world is good for you. See, for example, The Children and Nature Network. And what do dogs do? Besides cuddling beside us and licking our faces and acting as if we hung the moon, they get us outside, on the grass, under the trees and in the rain. Bear with me while I repeat myself: No wonder they are our best friends.

Here’s an excerpt, relevant to that point, from what I am writing now. Be forewarned, it will be years before this book comes to light, at least a year before I am done writing it. But here’s something I wrote this morning that feels relevant to the anniversary of the publication of The Other End of the Leash, about a pair of Barn Swallows that nested in my garage, and wreaked no small amount of havoc to my daily routine. It’s yet another example of the importance of a conscious and respectful connection to the natural world.

And then one day, one magical day that I will remember for the rest of my life, I came home to find all five baby birds straining so far out of the nest that I knew their first flight was inevitable. I stood in the garage and watched one bird after another take its first flight. Each bird dove out of the nest flapping crazily, it’s movement uncoordinated and seemingly inadequate to keep them airborne. At the last minute, as they zig-zagged toward the ground, their wings took hold and they managed to stay airborne. They’d fly for a few more seconds, seemingly at the edge of airborne disaster, and then slam into the nearby spruce tree, having as much to learn about landing as flying. But gradually, second by second, flap by flap, the movements of their wings became more coordinated, their paths through the air became straighter, more purposeful and they figured out how to land without smashing head first into a bough.

As the seconds stretched into minutes, they began to learn what was inside of them. They found what they had all along, an innate combination of ability and knowledge that lifted their bodies and directed their flights. They began to dip and turn, faster and faster now, until within just a few minutes I was watching five expert, tiny pilots, zooming right and buzzing left, streaking toward my face and veering off at the last minute. They looked overwhelmed with themselves and the joy of what they were capable of. I was overwhelmed too, with wonder and delight at their transformation from chubby, awkward babies into sleek, skilled flyers. I am still overwhelmed, just writing about it, at what me and five baby birds learned in just a few minutes inside my shabby old garage.

I am grateful for every day that I live on the farm, even when it’s 107 and it almost kills me to haul hoses to try to save the trees or 30 below and the water pipes in the barn are frozen and I’m carrying buckets down an icy hill to the barn cussing like a sailor. I write knowing that not everyone can live on a farm, and that I am a lucky woman. But I spent as many years of my adult life in tiny apartments with moldy showers and dank, stinky corridors as I have on the farm. I shared cans of Alpo with my Saint Bernard because that’s all we could afford, and bought my clothes from Goodwill. And I learned, that no matter where we live, we can all cherish a flower, put up a painting of a lake, sit under a tree in a park and listen to a robin sing to the sky. And if we are very, very lucky, have a dog with whom to share this amazing journey through time and space.

I don’t want this to be soliloquy, I’d love to hear your thoughts about your connection with the natural world, and perhaps your dog’s part in it. I look forward to reading your thoughts…

MEANWHILE, back on the farm: Willie is a happy boy. It’s still hot but not as bad as before, and we’ve been able to work sheep for short periods of time. I’m working on my timing while driving (the sheep away from us), trying to react fast enough to keep them in a straight line instead of zig zagging around the field. Let’s just say I have miles to go before I sleep. Willie isn’t putting a paw wrong on this, this is all my challenge. He needs to work on driving at a distance and staying comfortable letting the sheep get farther and farther away from me (and trusting that he an maintain control), but we can’t practice that on my little, short pasture. Hoping to do that this weekend.

Willie also got a new toy yesterday. It’s one of the new ones for sale on our website in the section named “Toys and Fun Stuff.” The toy is “Ellie the Elephant” and we love her because she is one sturdy pachyderm. I suspect she’ll even stand up to Willie’s tough love for quite awhile. I’ll keep you posted.  I’ll let the photos tell you whether he likes it or not. 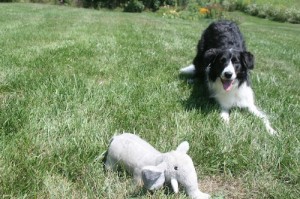 Here’s their first introduction. I asked Willie to lie down and stay while I snapped the first photo. Note the elevated hindquarters (that I didn’t notice while taking the picture!) 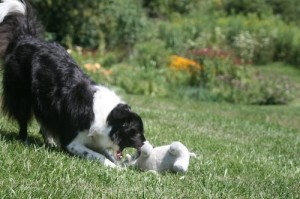 Willie decides to get acquainted. 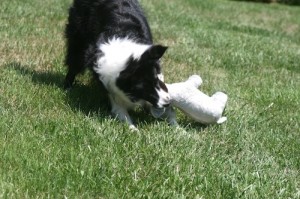 Here’s Willie’s impersonation of a rat terrier, as he begins to attempt to shake Ellie back and forth. Good thing he doesn’t know she’s an elephant. 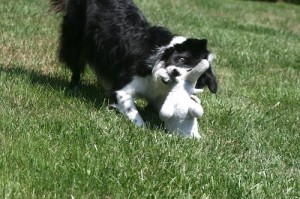 Yup, this is almost as fun as sheep herding!

And finally, after a long play and photo session, Ellie and Willie rest in the grass. Willie looked so contented I half expected him to ask for a cigarette. 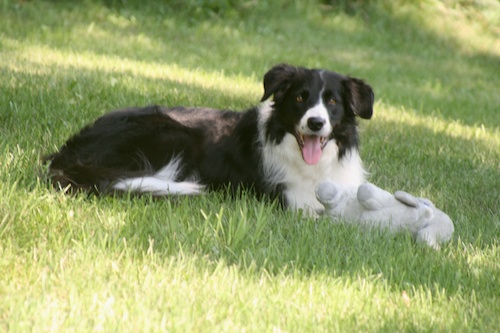 « Using Positives to Decrease Negatives
Do Other Animals Keep Pets? »