Welcome to an ongoing inquiry about the behavior of people and dogs.
Blog Home >> Archives for Animals and the People Who Love Them 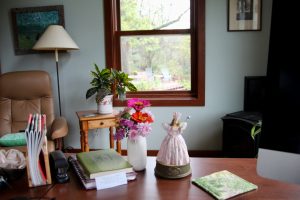 Well, this is weird. It's Monday morning, and I'm not in my usual place, writing my blog on my laptop in the dining room, Skip curled up against the door, Maggie out of sight in the living room sprawled on the couch. No, I'm writing to you on the huge iMac in my study, the one I don't let myself use unless I'm writing a "big book." No internet unless for book research, no email, no nothing but working on the book. It's the room where I wrote The Other End of the Leash, For the Love of a Dog, and The Education of Will. I conditioned myself to use it, and only it, for serious writing, as a way of fighting off the lure of endless distractions. Classical conditioning isn't just for dogs. I'm here in my study because I'm going to start working on my mystery novel again. I haven't touched it END_OF_DOCUMENT_TOKEN_TO_BE_REPLACED 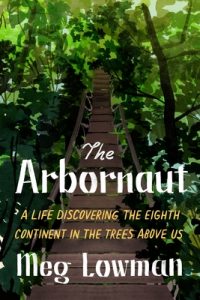 I don't know about you, but the state of the world is such right now that I need lots of healthy distractions. (What, is the vodka, triple sec, pomegranate, lime juice, club soda drink I sort of invented not healthy?) I am indeed doing what I can to be a good, active citizen, but one can't spend all day in the weeds of chaos without descending into the murk permanently. And so, let's have a discussion about new and wonderful things. They don't have to be new to the world, just to you. Here are some things on my list: Emma Parson's The New Click to Calm book has a great chapter titled "Teaching Emergency Behaviors." This section is especially relevant given our discussion last month about feeling guilty if your dog is reactive. I mentioned how important it is for owners to be END_OF_DOCUMENT_TOKEN_TO_BE_REPLACED 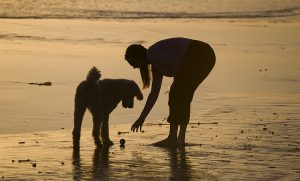 Dr. Hal Herzog, a PhD psychologist specializing in behavior and human/animal relationships (see Some We Love, Some We Hate, Some We Eat), recently wrote an article for Psychology Today that got my attention. Before publication, he talked to me about it briefly, with the following question: Did I find that anxious owners tended to have anxious dogs? My response was a bit different than some of the others he interviewed, who said, "absolutely!" In contrast, what I remember most are the multitude of clients I saw who had healthy, happy, well-behaved dogs until they got "that dog," the one who barked at everything or paced all night or was terrified of his own shadow. Often they would say things like: "I'm sure it's my fault. Every time we see another dog approaching, I get END_OF_DOCUMENT_TOKEN_TO_BE_REPLACED 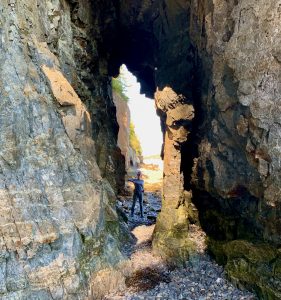 I was at a sheepdog trial recently when a friend reminded me of an incident from long ago that I described in For the Love of a Dog: Understanding Emotions in You and Your Best Friend. Here's the text: At first, all I saw was a white blur out of the corner of my eye.  It was a long way away, maybe 500 yards, and initially I wasn’t sure what it was. Most of my focus was on my Border Collie Luke, who was running his fastest about two hundred yards away.  I’d sent him on a long outrun toward a flock of sheep during a “fun day,” when herding enthusiasts get together and revel in dogs and sheep and the sloppy kisses of young puppies. Many people there that day were serious competitors in herding dog trials, and were grateful for the opportunity to hone their skills away from home. Luke END_OF_DOCUMENT_TOKEN_TO_BE_REPLACED 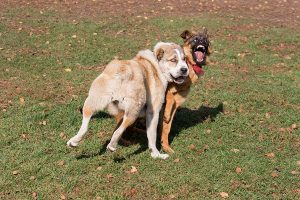 Dr. Karen London, in a reprinted article in Bark Magazine, raised some interesting questions about the meaning of different patterns of raised hackles, or piloerection, in dogs. First off, note that many people associate piloerection with aggression, well illustrated in my search for photos of dogs with raised hackles in a commercial photo site: All 3 illustrations I have in this post were labeled as "angry dogs." However, piloerection is an indicator of arousal, not potential aggression. There are a lot of emotional states that can correlate with arousal, including fear, excitement and surprise, and some of those might lead to aggression, but not necessarily. Raised hackles, or piloerection (goose bumps in people!), are common in mammals, and are caused by a contraction of the muscles END_OF_DOCUMENT_TOKEN_TO_BE_REPLACED