Welcome to an ongoing inquiry about the behavior of people and dogs.
Blog Home >> Dog Behavior >> Dog-Dog Aggression, Puppies and “Intensive Sniffing”

I’m curious about your experience with dogs who are dog-dog aggressive and what I’ll call “intensive sniffers.” Ever since I heard Sue Sternberg say that dogs who sniff obsessively in her office are often/usually/always?) dog-dog aggressive, I have paid more attention to “intensive sniffing behavior” (I don’t know what else to call it–but hey, I just made that term up, so don’t go looking in the literature!). I’m talking about the dog who enters a room in which other dogs have been previously, puts his nose down and doesn’t lift it up for minutes at a time. I did indeed find a correlation (just observations, no research) that dogs who can’t seem to stop sniffing an area where other dogs have been, are often dogs who have problems with other dogs, especially unfamiliar ones.

I remembered that when I first took Willie, over 3 years ago, to his first vet clinic appt. He was about 8 weeks or so, maybe a day or two older. He first panicked when he heard dogs barking in the background, and I mean panicked. He looked terrified. We moved away from the sound (which was a good 100 yards away–the outdoor area of a doggy day care) and to the front door of the clinic. I put him down and he slammed his nose into the ground and started sniffing loudly and, well… intensely. He would not move from that spot for food, squeaky toys, smooches, clicks or guarantees of an entire chicken for dinner on a daily basis.

I groaned silently, predicting that this could indicate serious trouble down the road. (He had been a bit fearful of my dogs when he first met them, but he was a 7 and a half week old puppy who withdrew but then came right back and let them sniff him. It didn’t seem excessive at the time at all.) I picked him up and took him inside, where he went happy, waggy, flappy body at the vet tech and the vet. As we were leaving the appt, we walked into the lobby to find a Bichon puppy in the middle of the floor. Willie ran under a chair and hid. From a Bichon puppy. As if it were a monster.

Ah, Trisha, you might ask: And why did you keep this puppy? All I can say is that for over a year I said “I’m not sure I’ll keep him, but I just want to work with him enough to keep him out of a shelter or a euthanasia appointment.” As many of you know, he did exhibit horrific problems with other dogs for a long time, and I worked my tail off on it. (I show a video of him meeting a new dog in the Dog-Dog Aggression DVD, including one of the ways I’ve treated his issues. (the DVD is now on sale, my staff tells me I’d better mention, or they’ll muzzle me for life). As many of you also know…. I am stupid in love with him and wouldn’t re-home him for any thing or any body.

Two questions, really: How many of you have seen dogs who exhibited the potential for dog-dog aggression at such an early age? I have no explanation for Willie’s behavior. He grew up around other BCs and Labs, the breeder swore nothing she can think of would have caused any problem. I can tell you that his dam an sire were bred again, and resulted in another puppy with the same issues.

The other question relates to the “intensive sniffing.” I’m curious about your experience with it. I can tell you that I’ve seen dozens of dogs now who are dog-dog aggressive to unfamiliar dogs who attach their noses to the ground and will not stop investigating the scents of other dogs. One of the markers, as a matter of fact, that I used to judge Willie’s progress was how intense he seemed about smelling the scents of other dogs. It makes sense when you think about it… if one is nervous/anxious/deeply concerned about unfamiliar dogs, then one would spend an abnormal amount of time checking “them” out, scent-wise that is. Willie, for over a year, acted as if every unfamiliar dog he saw was a monster. A raving, horror-movie, flesh eating monster. Now when he sees another dog he wags his entire body and whines to get closer. He’s doing extremely well, and I am proud and relieved (but dog parks well never be in our future……)

Here’s the little monster himself…. 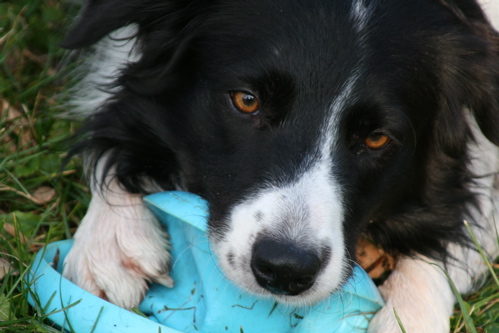 And here’s some of fall’s bounty, from the CSA down the road. Yum…. 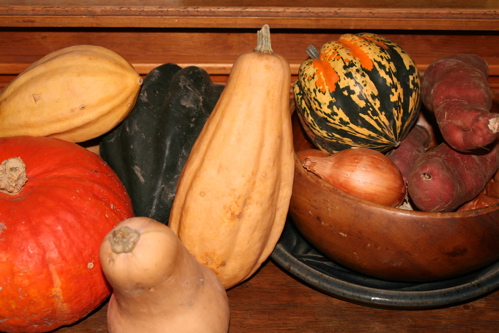