Welcome to an ongoing inquiry about the behavior of people and dogs.
Blog Home >> Cats >> Fear in Dogs and In-Utero Experience

I’m working on a column for Bark right now about the ontogeny of fear in dogs. The editors, Claudia and Cameron (the editors of Bark), adopted two sisters from a rescue organization down south. The girls are litter mates who might be BC/terrier X beagle crosses. Both came under socialized and shy, but one (Kit) has rapidly come out of her shell, while the other (Holly) is still profoundly fearful of any kind of novel event. Leaving the house is a trauma for her, as is the appearance of any object that she’s not expecting. (Claudia’s purse fell off a chair and Holly refused to go anywhere near it, even though it blocked her access to her favorite area of the house. Meanwhile, Kit jumped over it and continued on her way.)

Claudia’s question to me, and the motivation for the column, is “What are the forces that have made these 2 siblings, who shared the same early environment, so profoundly different?” It’s a great question… and I’ve been doing some research I thought you’d be interested in. A longer story will appear in a later issue of Bark, but here’s a small piece of it:  Evidence is increasing that in utero experiences have profound effects on an individual’s personality. Just look at these findings from human development:

1. Babies born of starving mothers are born with livers and pancreases that are less able to process fat and sugar, and as adults they are predisposed to diabetes.

2. A moderate amount of stress during pregnancy leads to a child who is more adept at tasks requiring reasoning and coordination.

3. However, extreme stress or trauma does the opposite, and can create a child with fewer receptors in their brain for the stress hormone cortisol. Once born, even as an adult, the child’s brain is unable to sense large amounts of cortisol until it’s too late. Suddenly swamped with cortisol, the individual responds to even mild changes in the environment with fear and anxiety.

Although the studies I mentioned are all on primates, there is a great deal of evidence supporting the same effect in a large range of mammalian species. Here’s where the recipe for differences in personality in dogs comes in, even in litter mates. First off, all litter mates come with a different genetic blueprint. Just as you and your siblings aren’t clones of each other, neither are puppies, even when they are born at the same time. Each set of genes is going to react differently to the environment, including the one that surrounds a pup as it develops in utero.  By the time pups are born, they have had two very different sets of experiences. They started out with different genetics that effects how they respond to their early environment, and they each have had a different experience inside the womb. We may think it’s all the same in there, but developmental biologists will tell you that each fetus has very different experience than it’s womb mates. (I do apologize for the pun . . .  but I just can’t bring myself to delete it.) Some puppies get more nutrition than others, some get better immune system protection, etc.

By the time a pup, kitten or child is born, they have both nature and nurture to separate them.

I knew some of this years ago when I was breeding, and will never forget when Pippy Tay was about 2 1/2 months pregnant. She had ripped a hefty patch of skin from her side in a classic “tent injury” that clearly needed a lot of stitches. (I just about fainted when I saw may dog looking like she’d been skinned. I called the clinic and said: “This is Trisha, the dog owner. This is NOT Dr. Patricia McConnell and I am FREAKED OUT!”)

After settling down,  I talked to the vet for quite a while about her pregnancy, and what effect any drugs we’d use would have on her, and how stressful the procedure would be. I’d just finished reading about learning deficits in rhesus macaques whose mothers had heard loud noises randomly produced during their pregnancy, and was worried about the effect of treatment of her developing puppies. We elected to give her just a local anesthetic, I stroked and coo-ed to her during the entire procedure, and thank heavens, she seemed relatively calm during the entire procedure.  After wearing a T-shirt for weeks to protect the wound, she healed with no complications. I relaxed and the pups turned out beautifully.

I do think, though, that’s it is a good thing I’ll never be pregnant now that I have this knowledge. I can just hear it: “Careful! Be nice! Mustn’t stress mummy! You know what the research says!” (Oh, wait, but the studies do say that moderate stress is a good thing! Shhhhhhhhhhhhhhh.)

I’d love to hear if others have had experience with litters whose mothers went through serious traumas. Of course, we’ll probably never know what happened to Kit and Holly’s mom while she was pregnant, but it is tempting to speculate that it wasn’t all good.

Meanwhile, back at the farm: Somewhere I have a print photo of Pippy with the T-shirt, if I find it I’ll attach it to this post. But for now, here’s Sushi, looking ever so stressed on the couch on a cool morning …..  Not a lot of stress there! 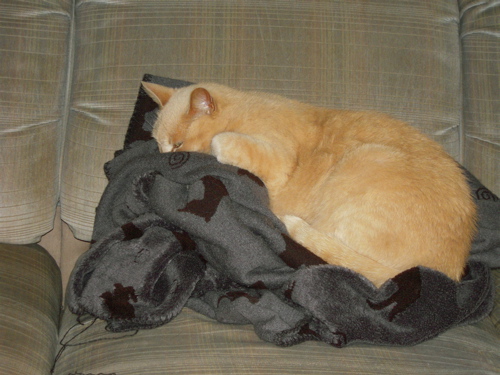 « Eat Your Veggies (Tell That to Your Dogs!)
Hi from Portland »