Welcome to an ongoing inquiry about the behavior of people and dogs.
Blog Home >> Animals >> Goodbye Calling All Pets

Well, this is a hard one to write.  Wisconsin Public Radio has cancelled production of Calling All Pets.  They will still play repeats for several months in Wisconsin, and stations around the country have the option of offering the show until next summer.  I’ve been doing the show with Larry Meiller for fourteen years, and it’s hard to imagine not doing it anymore. It’s tough  timing too in that the show had taken off last year, thanks to a lot of work from Larry, me and a new producer and executive producer. The show was even picked up in Washington DC, Dallas and Seattle. However, I have to admit that I won’t miss getting up early in the morning to do the show, and working seven weekends a year on pledge drives and fund raising events.  But here’s what I will miss:

Working with Larry Meiller. He is a truly wonderful man, and he makes it look easy to be on the radio.  It isn’t, not if you’re good at it, but you’d never know that listening to him. He taught me so much, and I will forever be indebted to him. I think of him as a close friend, and will come on his daily show as a guest on occasion.

Connecting with people who believe that animals are important. This is the toughest part by far.  I have realized since I heard the news about the cancellation that what I have valued most about the show is the connection it has given me to a group of people who believe that our love, interest and concern for animals–both wild and domestic–is important.  It’s as important as music or art or literature or news about sports events. It seems that the world sorts into two groups in a way: those who get it, and those who don’t. It feels like I’ve worked all my life to  convince people that our connection to animals is important, that “pets” aren’t trivial and that knowledge and concern about the natural world is vital to our individual and social health.

The great thing about Calling All Pets is that I had fourteen years to make that argument, along with advocacy for using positive reinforcement, instead of punishment and “dominance” as a training technique.  Fourteen years is a long time in the media, and I’m truly grateful to WPR for creating that opportunity. I expect that the decision to cancel the show didn’t come easily, and that the decision was made by folks doing their best to make the best decisions they could for WPR. I wish they hadn’t made the decision they did, but it will give me an entire day a week to do other things. Who knows what doors will open as another one shuts.

Speaking of opportunity, how very glad I am that I have this blog. I have already enjoyed your comments immensely, and am grateful that I have another opportunity to communicate to others who believe that animals are important.

On a lighter note: On Sunday, ironically, I had a party for donors to Calling All Pets and WPR. It was delightful to meet such generous people, and we had a great time.  I didn’t think to get any photos during the party (geeeez), but thought you might enjoy what my rug looked like right before everyone came and what it looked like a few hours after they left. 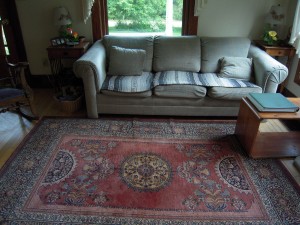 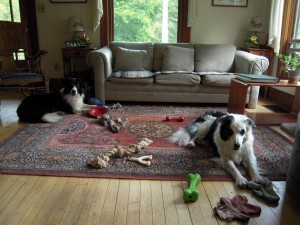 Of course, the newspapers, dog magazines and journal articles are still hidden in the study, the mangy wool cover over the couch isn’t as mangled and messed up as it usually is, and there are no clouds of dog hair wafting around.  Otherwise, it looks pretty much like normal…

« Happy Faces!
Are Pets Important? Will Comes into his Own. »