Welcome to an ongoing inquiry about the behavior of people and dogs.
Blog Home >> Dog Behavior >> Hunting Wolves with Dogs in Wisconsin

Ignorance can be bliss. But it can also let bad things happen, and it grieves me to say that bad things might happen soon in my home state. In its wisdom, the legislature of the state of Wisconsin signed into law Act 169, which directs that dogs can be used to hunt wolves in our state. The wolf population in Wisconsin, having recovered naturally (no wolves were re-introduced) to over 800 individuals, were removed from the endangered species list in Wisconsin in January of 2012, and the legislature mandated that the Department of Natural Resources (DNR) establish rules and regulations for the hunt itself. These rules were developed under “emergency” rule-making process, that began in May and will allow the wolf hunt to begin in October of this year.

The hunt brings up many issues, from the hunt itself to how it is conducted, but the issue on the table right now is the rules and regulations that the DNR has established related to the use of dogs. Or lack of them. Let me start out by saying that, in my opinion, dogs should never be allowed to be used to hunt wolves. Period. In addition, any regulations about how the wolf population is controlled should be based on good, solid science and the recommendations of the people who have studied the species for decades. There are several extremely knowledgeable wildlife ecologists who have been studying wolves for years here, and it appears as though their knowledge and expertise was not a part of the decision-making process.

Changing laws take time, and right now the legislature isn’t even in session. What is highly relevant now is that the DNR was charged with creating rules and regulations about, among other things, how dogs would be used. Here’s what they had to say: Dogs can’t be used at night, and no more than six dogs could be used at any one time. That’s it. Nothing else. You can just take your dogs out there, set ’em after wolves and see what happens. This, in spite of the fact that the law says dogs can be used to “track and trail” wolves, but not necessarily to do anything else (as in engage them in fights.)

The stunning lack of reasonable restrictions on the use of dogs is why I’ve been involved with a lawsuit filed by a group of Humane Societies and citizens, which has asked the courts for an injunction to stop the use of dogs in the hunt until, at a minimum, regulations can be formulated that at least decrease the inevitable suffering that will occur if dogs are set out after wolves. As structured now, it’s nothing less than state-sponsored dog fighting.

Supporters of using dogs to hunt wolves (mostly bear hunters) argue that dogs are essential to a successful hunt, that dogs will be trained to stop on command as soon as they locate a wolf, and that only single wolves will be pursued. Beyond this optimistic set of expectations, the behavior of the wolves themselves appears to be downplayed or ignored. Wolves are territorial animals that don’t take kindly to incursions by other canids. As a matter of fact, one of the arguments for the wolf hunt itself was from bear hunters whose dogs were killed by wolves. (Anyone hunting bear in Wisconsin with dogs can receive $2,500 in compensation if their dog is killed by a wolf, even if the hunt took place in an area targeted by the DNR as not safe for dogs due to previous attacks.) Up to 22 hunting dogs have been killed by wolves in just one year (2008). You can see the details, year by year, on the DNR’s own website. Wildlife ecologists are clear: Setting free-ranging dogs off after wolves, purposefully into known wolf territories (and during the mating season no less) is a recipe for severe injury, if not death, for man’s best friend.

That is why I have agreed to act as an expert witness in the lawsuit, arguing that first, at minimum, dogs MUST be kept on a line. The evidence is overwhelmingly clear: dogs ranging far from humans (bear & coyote hunting dogs run far afield of their handlers, usually with GPS collars on so that the hunters can locate them) are at risk of attack from wolves, while dogs close to humans are less so. I’ve also argued, as have others, that the regulations must include restrictions that only allow scent hounds–the dogs bred to track and trail–to be allowed to be used in the hunt. Rumors are flying about hunters bringing in a range of dogs, large dogs who were bred not just to locate prey but to fight with it. Some people are concerned that a breed restriction sounds like a breed ban, but rather it’s a mechanism to try to keep dogs from suffering. Even if all dogs truly were kept on leash (and the DNR argues that that would be difficult to enforce, which is a bit of an understatement), even in the best of circumstances, we all know that “stuff” happens, and that some dogs are going to end up off leash. So which kind should they be? A black and tan coonhound bred to track and trail, or a greyhound that someone picked up cheap from a track that is going to run after a moving wolf until it catches up? Or how about one of the dogs actually used to hunt and kill wolves in Kurkistan? Argh, the thought of it all is truly horrific.

The good news is that the court has granted us a temporary injunction, but it is only temporary. There is a hearing tomorrow, Friday the 14th, in which the state is asking the lawsuit to be dismissed. If it is not, then the issue will come up again at the Natural Resources Board Meeting in Eau Claire, Wisconsin on Sept. 26th. I expect to be there to testify that it is a violation of the state’s animal cruelty laws to rush into allowing dogs to hunt wolves without serious information gathering and input from a variety of sources. Several other dedicated folks have also been integrally involved, including wildlife ecologists and wolf experts Randall Jurewicz and  Richard Thiel and Adrian Treves, an expert on “co-existence & conflicts between people and wildlife. I don’t know if they will be at the NRB hearing, but they have been integral to the fight, led by our Alpha Female, Jodi Habush Sinykin from Midwest Environmental Advocates.

I realize that this issue is not relevant to many readers, but it’s too close to my heart and too much a part of my life right now, not to bring it up. I know that dogs are not allowed to hunt wolves in any other state in the US, but that there are a few places in the world where they are used. Given that wolves have been harassed and decimated for centuries all over the world, most places don’t have the luxury of talking about “wolf overpopulation.” It’s been a joy for many of us to watch our wolf population increase, even though, yes, as a livestock producer I do sympathize with the problems that can ensue from living with a large, pack hunting predator. It is absolutely appropriate that livestock producers be compensated for losses to wolves, and receive assistance in how to manage their animals to avoid depredation. And it is more than reasonable to use knowledge and science to manage the population. But what a sad, sad day for Wisconsin if a small contingent of hunters are allowed to exploit dogs by asking them to risk their lives as “man’s best friend.” All the hunters I’ve talked to (deer, small game and water fowl) are universally appalled at the idea, but it only takes a few. And there have been over 20,000 applications for wolf hunting licenses already turned in. Less than 2,000 will be issued, but how many will want to use dogs? I’d argue that one is too many. I’ll keep you posted, but if you live in Wisconsin, know that we’re living in a state that could be the first in the nation to allow dogs to be used to hunt wolves.

Here is my favorite photo of wolves, that I was able to take at Wolf Park in Indiana. Monty Sloan, the resident (and brilliant) photographer, let me borrow his kick ass telephoto lens, and I took this picture of these gorgeous animals just as the sun was going down. It was February, breeding season, so although we got to be up close and personal with individual wolves, no one but staff was allowed in with the pack. (This is the same time of year that the state of Wisconsin wants to  allow dogs to hunt wolves.) The wolves here are engaged in ritualized displays about who’s who in the pecking order. There would be nothing ritualized about the next steps if the canid on the bottom was a dog who just ran into the pack’s territory. 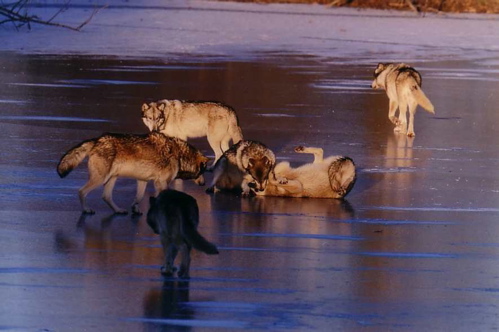 « Willie and Tongue Flicks and What it All Means
Happiness in Animals? »