Welcome to an ongoing inquiry about the behavior of people and dogs.
Blog Home >> Animals >> Inbreeding in Dogs Part II

Wow. What an interesting and informative set of comments in response to my last post, thank you so much for taking the time to write; I have learned a great deal just from reading some of your comments. I wish I had a couple of days to do nothing but research this topic. (But here’s the good news: I WILL have time this summer once the new booklet is out, and I’m going to use that time to learn more and substantially revise the section on behavior and genetics in the Advanced Canine Behavior Seminar this October.)

I could write for hours too on this topic, but I’ll summarize some of my own thoughts here, in hopes that this important discussion continues.

Let me address the issue of inbreeding from two perspectives: 1) the resultant lack of genetic diversity caused by inbreeding and 2) the potential of increasing the frequency of deleterious genes in an inbred population.

As a biologist, I was trained that a lack of genetic diversity is usually problematic in any biological system. Both biotic communities and populations of animals and plants tend to be more stable if they have not suffered from a lack of diversity. For example, the infamous potato famine was caused by a reliance on one variety of potato that did well in Irish soils but turned out to have no resistance to the fungus that caused potato blight. Once the disease took hold, and because so many Irish were reliant on the potato for sustenance, 750,00 people died and two million left for other countries. If there had been a variety of types of potatoes used around the country the disaster would not have occurred.

That is an extreme example, and granted it is from the plant world, but in a general sense (I’ll get back to that caveat later), genetic diversity makes a population more stable, or more able to withstand challenges from disease, extremes of weather or other significant changes in the environment. Animals that reproduce by cloning, and thus whose young are exact replicates of the parents, only thrive in highly stable environments. Indeed, it is argued that sexual reproduction (which is energetically expensive, risky, messy, etc) evolved as a way of creating genetic diversity … each individual has a unique genotype that results in a population in which some individuals are more suited than others to cope with environmental changes; changes that are unpredictable but, in most environments, are inevitable.

The second problem caused by a lack of genetic diversity in a general sense is the increase in frequency of recessive genes and or mutations. These genes are very rarely advantageous and there are numerous examples of diseases, structural deficits and congenital problems associated with small gene pools. For example, medical researches love to find isolated populations of people who have a high frequency of an otherwise rare disease, because that makes it easier to find the genes associated with it, study it and attempt to find a cure.

So, how does this relate to our dogs? Answer: we don’t really know. Seriously, we are in desperately need of good research on this topic. But we do have some guesses: One of your colleagues sent in a link to a study done on the highly inbred wolves who live on Isle Royale in Minnesota. (Thank you Jeff.) Researchers estimate that 58% of the wolves suffer from a serious deformity of the lumbosacral region, with 33% showing a severe malformation of the spine that causes partial or complete paralysis. 100% of the dead wolves that they have found for the last 12 years have displayed bone deformities.

Yes, of course, dogs aren’t wolves, but there are so many examples of breed specific abnormalities that appear to be related to a doubling up of recessives: hyperuricemeia (bladder stones) in Dalmatians, a defective MDR1 gene in collies and aussies, a much higher frequency of PRA and hip dysplasia in some breeds rather than others, etc etc.

What to Do? Should everyone run out and start breeding Border Collies to Border Terriers? (I know, some people do for Flyball dogs!) No, but I think each breed club has simply got to focus more on health than on the “purebred” aspect of their breed. Many of the comments in my previous blog mentioned the Dalmatian club’s and AKC’s lack of acceptance of a line of Dals that were bred to bring in the normal gene: one pointer was introduced into the line, and then an entire line of many generations of dogs that look and act exactly like Dalmatians were bred. But the breed club and AKC refused to accept them as Dalmatians.

What is a Breed, anyway? Here’s the bottom line of what I want to say about this issue: For years, a “breed” was a group of dogs who generally looked somewhat similar and acted in a similar way. They often came from the same locality (thus,  Border Collies from the Border Counties between Scotland and England), but they were bred primarily for function, not for looks. Indeed, you can still register a dog with the ISDS who looks anything vaguely like a Border Collie IF it behaves like one around sheep. I learned from your comments that Hanoverian and Oldenburg horses can be bred together IF they look and behave as the ‘other breed.’ “Alaskan Huskies” are not considered a breed, because any breed who can add to a dog’s strength, stamina and drive is welcome. But that’s what ‘breeds’ used to be: a group of animals who behaved in a particular way. IF it was found that bringing in genes from another location or breed was helpful, it was done without any controversy whatsoever.

My favorite “breed” story is from Ray Coppinger, who tells the story of looking for breeding stock for sheep guarding dogs in the Anatolian mountains. He was looking for an Anatolian shepherd, and found a man with a likely looking brown dog walking behind a group of sheep. Ray asked the man “Is that an Anatolian Shepherd?” The guy looked at him for a minute, and said “Are these the Anatolian Mountains?” In other words…. we’re in Anatolia, the dog is with sheep, so of course it’s an Anatolian Shepherd you idiot! Ray also tells another story of looking for a Great Pyrenees and finding a breeder who took him to the barn to look at a new litter. The litter contained several all white pups, some black and white and some all black. The owner picked up the white ones and said “These are the only Great Pyrenees, the others are another breed.”

So should breeders randomly throw up their stud books? No, I would not advocate that for a minute, but IF there is a real or potential problem related to health or behavior, then absolutely breed clubs should be looking at ways to solve the problem by looking at the genotypes of their breed. Some clubs, very much to their credit, have done this: Basenji’s in this country were derived from a tiny number of dogs until the club went out of its way to import dogs from Africa, for example.

Ah, so much more to talk about. I’m going to save some other aspects of this issue (Are mixed breed dogs really healthier than purebreds? Can you breed for function by looking at structure and movement?) for later, but hopefully this will continue the conversation. I’d love to hear more examples of what breed clubs are doing to promote the long term health of their breed. Some good ones were already mentioned in the previous post’s comments, but I’ll bet there are more.

One last point before I move on: I know that this topic brings up many controversial and loaded issues, and I want to express my gratitude for the courtesy and intellectual curiosity that so many of the comments exemplified. It’s my belief that we desperately need more open-minded discussions about many issues in the dog world (and the world in general, but I won’t go there), and I am grateful for all of you who commented with such grace and civility.

MEANWHILE, back on the farm: It’s sunny and gorgeous right now, after a chilly morning with frost on the grass and daffodils. You gotta give the daffs credit: they have lived and thrived through multiple freezes, a serious hail storm, sleet, and hot sun (just one day). But they look great, probably because the cool and wet weather has preserved them, and because somehow they miraculously survived the hail (I’m still not sure how that happened, except that it didn’t last too long here, but had me flying outside in the middle of the night to move the car.)

True confessions: I still need to grade 12 papers today, have 97 emails in my inbox and need to work on the exam for next week BUT, it’s GORGEOUS outside and I’ll be inside all weekend and there’s a flower bed begging me to weed and mulch it. I might just have to play hookey for an hour before I get back to work. Have to admit though, I’m yearning to work Willie on sheep in this perfect cool weather. Oh well, August will come soon enough, hey?

Here’s a photograph that I took a few days ago that feels like a perfect metaphor for life right now: Beautiful flowers surrounded by prickly raspberry thorns. The thorns can rip you to shreds–if you’ve ever tried to cut them out or pick berries in a wild patch you know what I mean– but they also produce one of my favorite foods later on in the year: black raspberries. Flowers for the heart, berries for the body, and thorns to remind us that life is always full of challenges. 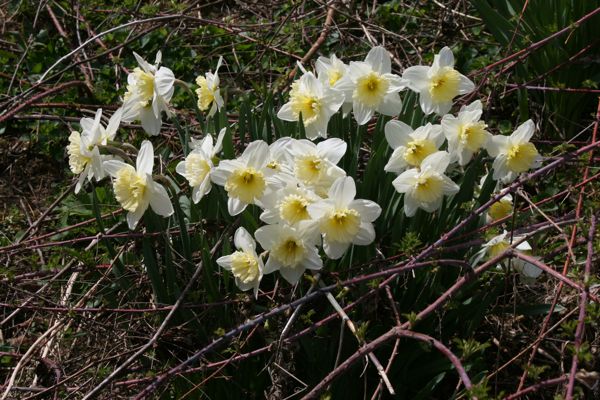 « Inbreeding in Dogs
Sunset at the Farm »