Welcome to an ongoing inquiry about the behavior of people and dogs.
Blog Home >> Border Collies >> Is Anthropomorphism a Dirty Word?

The short answer is no, not always. As a matter of fact, our ability to attribute human characteristics to non-human animals is an impressive ability that we should be proud of. In addition, it can make us better dog owners.

Lest you think I’ve lost my mind, let me explain, this time with a longer answer. Go back to about 40,000 years ago, when people began creating figures that combined features of humans and animals. We don’t know their purpose, but we do know that our tendency to combine human and non-human characteristics is ancient. Archeologist Steven Mithen argues that anthropomorphic art suggests that hunters were attempting to identify empathetically with hunted animals to “better predict their movements.” The term was actually used most often in early history as imagining religious figures in the form of mankind, or attributing human emotions to biological events, like “angry winds” or “benevolent seas.” Revengeful winds make little sense, but the ability to project ourselves onto others actually does. Not only does it have a purpose, but it is not an especially easy thing to do.

Indeed, the ability to attribute “human traits” to non-humans is actually only possible if a creature has reached a high level of cognition. For example, suggesting fear or jealousy in another is only possible if you are capable of  putting yourself in the place of another. This is a handy ability to have, given that it allows one to make predictions about the future behavior of one’s partner, competitor or prey, and adjust one’s own behavior accordingly. You’d expect to see it in highly social animals with a high level of cognition, and indeed, that appears to be the case.

Primatologist and rock star author Frans de Waal reminded me of that last week, in a great speech he gave about the evolution of morality at UW-Madison for the Isthmus Society. Part of his talk included a study (V. Horner et al, PNAS ) in which chimpanzees chose a token that resulted in a food reward for themselves, or for themselves and another chimp sitting close by. More than half of the apes chose the token that got their companion a food reward too, even though it made no different to the chooser. This kind of behavior is called “pro-social behavior” and presumes that an individual understands that another would want some food, (because they would in the same circumstance) and even more, cares about whether they get it. You can learn more about this, and watch some great videos, in Dr. de Waal’s TED talk on morality in animals.

My point here is that being “anthropomorphic,” is actually an example of what is called “Theory of Mind,” in which one realizes that another has a mental life somewhat like one’s own. That’s an impressive skill, and one that has stood us in good stead for a long time. And yet, of course, we can get into a lot of trouble taking this ability too far. I talk about this at length in The Other End of the Leash, when discussing how we humans hug others to express affection or solace, and how we often hug our dogs. Not being apes however, most dogs inherently dislike hugging, and often perceive it as rude or threatening. Another example of anthropomorphism getting us into trouble is the attribution of guilt to dogs when they are exhibiting appeasement behavior. Thus, yes indeed, being being anthropomorphic can get us into trouble, but that doesn’t mean it is always a problem.

In Ape and the Sushi Master, Frans de Waal examines anthropomorphism in detail, and I would argue that his evaluation makes more sense than any other I’ve heard. He suggests that the “big A” actually consists of three sub-categories:

Anthropocentrism, in which one puts oneself in the center of the universe and assumes that animals are simply fuzzy or feathered people. This, needless to say, is the kind of thinking that gets us into trouble, and results in viral videos of “guilty” dogs who aren’t guilty at all.

Anthropodenial, in which one assumes that if a human can do it, an animal can’t. This perspective, at the other end of the continuum from the one above, results in its own set of problems. Arguing that a dog or a chimpanzee can’t be fearful or angry because humans have exclusive ownership of emotions is now known to be ridiculous. It ignores all of what we know about neurobiology, physiology and the fact that humans are mammals and share much of who we are with our animal brethren.

That is why de Waal argues for what he calls Animal-centrism, in which we do all we can to elicit what life is like for a member of another species. Alexandra Horowitz’s book, Inside of a Dog does a great job trying to see the world from a dog’s perspective. The fact is, the comparative internal life of you and your dog is a glass half full and a glass half empty. Both dogs and people are mammals and share a significant amount of our mental lives based on similar brain structure and neurophysiology. And yet, dogs are red/green color blind and we are idiots when it comes to perceiving the world through our noses. But the next time someone accuses you of being “anthropomorphic,” ask yourself which category your behavior was in, and don’t hesitate to stand up for yourself if you were being “animal centric.” In my experience, people are often anthropocentric too often (“I am furious at my dog for chewing up the pillow!”) but often not animal centric enough (“I just can’t understand why he would bite my child just because he was backed into a corner and being slapped on the face!”) Progressive trainers and animal behaviorists all seem to concur that fear is the number one cause of “aggression,” and yet so often owners neglect to understand that their dog is acting out of fear rather than being stubborn or “dominant.” Seems to me that a little of the right kind of the “big A” would go a long way sometimes. . .

Find out more on emotions and anthropomorphism by reading chapter one in my book, For the Love of a Dog.

MEANWHILE, back on the farm: Maggie and Willie continue to play relentlessly. I’ve found it interesting that their play has changed over the weeks. They still do a lot of running, but now their play includes lots of herding, in which they attempt to head each other off at the pass, so to speak. This begins the second they are let outside, with Willie “short stopping” in front of Maggie as she tries to run up the steep hill behind the house. Maggie appears to think this is great fun, and tries as hard as she can to beat Willie at his own game. They are evenly matched, and so they make their way up the hill darting right, and dashing to the left, while I watch with my heart still in my throat, thinking about the pin in Willie’s shoulder. I do stop them when I become concerned that Willie has done too much, but I am amazed how how hardy he has become.

Tootsie is so much better; we’ll never know if her painful swollen foot was an injury or from Lyme, but she’s still on her antibiotics and doing really well. She’s getting her teeth cleaned today, poor kid, she won’t be very happy tonight when I pick her up. But it’s well worth it, her mouth was a mess when she was pulled from the mill (the dentist extracted 20 teeth) and she needs a lot of dental care to stay healthy.

Lambs!? Not yet, but any day and I can’t wait. We let the ram breed only four of the ewes, although it looks as though one of them, Cupcake, didn’t take. Maybe she’ll surprise us, I’m hoping… But Lady Baa Baa, her mother Lady Godiva and Cupcake’s mother Barbie are clearly getting close. Oh boy… I do so love lambs!

Willie and Maggie continue their love affair. Here they are playing one of Willie’s favorite games, Keep Away. Of course, there is lots more to the story, but overall things are just wonderful at Redstart Farm. I’ll write next week about their first three weeks together, and how I managed their introductions in the house. 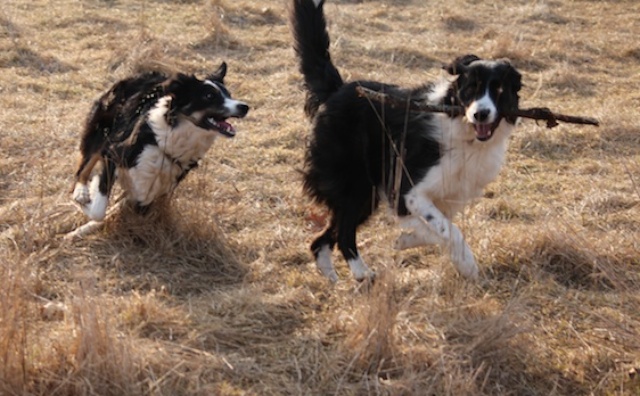 That’s not the only news at the farm. Spring has finally truly arrived.  That, of course, includes the torrential rains that we got this weekend and snow this morning, but it’s all part of April in the Midwest, so no one is surprised. Here are some of the first flowers on the farm, a tiny patch of color amidst a sea of brown and grey. 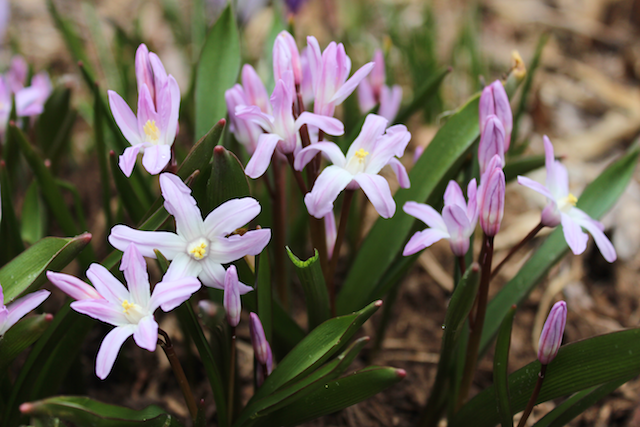 « Meet Maggie
Introducing A New Dog: Maggie and Willie as a Case Study »