Welcome to an ongoing inquiry about the behavior of people and dogs.
Blog Home >> Death of a Pet >> Love, Guilt & Putting Dogs Down

With apologies for the change in topics, I just have to respond to a comment on my last post, and to the hundreds of comments I’ve heard over the last 20 + years, about the guilt associated with putting a dog down. It is always wrenching, heart-breaking to euthanize a beloved dog, but taking a dog’s life away for a behavioral problem can be especially hard. I can’t take away the pain, no matter what the reason for the death, but here are a few things that I have found that have helped me and some of my clients.

First, for anyone who has had to euthanize a dog, I hope it helps to know that devoted owners are often wracked with guilt, no matter why the dog died. For example, I euthanized Cool Hand Luke after a long battle with kidney failure. By the time he died (he was close to death when we helped him along), I had worked extensively with five veterinarians, including specialists at the UW Vet School. He received the best that money can buy of western medicine, homeopathic medicine and chinese medicine. I cooked him a special diet every day and monitored every thing that went into his mouth. I’d go on, but you get the idea: I moved  heaven and earth for Luke, and still. . . I was wracked with guilt for a good year after his death.

Surely I had missed something? Surely there was just one more thing I could have done? One of my vets told me that Luke had an inflammation somewhere, but she couldn’t say where or what it was. I obsessed over trying to find it, and felt a crush of failure when nothing we did turned around his failing kidneys. I was consumed by the idea that IF I JUST WORK HARD ENOUGH, I could “fix” things and save Luke.

After he died, devastated by his untimely death (he was 12,  his daughter is now 15 3/4), I couldn’t get it out of my mind that somehow I should have done a better job of trying to save him.  In the cold light of day, this was, frankly, absurd. Luke had 5 of some of the best vets in the country and if they couldn’t save him, how in heaven’s name was I supposed to?

But as he always had, Luke left me with a gift. It took awhile, but I slowly began to notice how EVERYONE I talked to who loved their dog, like we all love ours, was guilty about something related to the dog’s death. It didn’t matter how or why they died: hundreds of owners, from prof’l trainers and behaviorists to the dog loving public, found something to feel guilty about. “I should have seen the symptoms sooner,” or “How could I have not known that the lock on the door was faulty and allowed my dog to run out the door?” or “Surely I could somehow have prevented the bite if I just hadn’t……”

Here’s what Luke taught me, along with the wise comments of a psychologist friend: It is easier to believe that we are always responsible (“if only I had done/not done this one thing….”) than it is to accept this painful truth: We are not in control of the world. Stuff happens. Bad stuff. As brilliant and responsible and hard working and control-freaky that we are, sometimes, bad stuff just happens. Good people die when they shouldn’t. Gorgeous dogs brimming with health, except for that tumor or those crappy kidneys, die long before their time. Dogs who are otherwise healthy but are a severe health risk to others end up being put down. It’s not fair, it’s not right, and it hurts like hell. But please please, if you’ve moved heaven and earth to save a dog and haven’t been able to… just remember:  Stuff happens. We can’t control everything. (Difficult words to dog trainers I know. . . Aren’t we all control freaks to some extent?) You didn’t fail. You tried as hard as you could. It’s okay.

To all of us: Try folding up that guilt and pain like a pile of dirty, ripped clothing, and throwing it away. Remember: Much of what we love about dogs is that they live in the present and accept what happens. That’s our job, to accept what happens sometimes, even though it’s the hardest job of all.

Secondly, there’s one more thing I want to remind everyone who has lost a beloved dog, no matter what the reason or whether there was guilt attached or not: Neurobiologist Jaak Panskepp tells us that “social distress,” or what we’d call grieving, is registered in a primitive part of the brain that is also associated with the perception of pain. I learned about this while I was writing For the Love of a Dog, and it blew me away when I discovered it. Ah Ha, I thought; no wonder we talk about the “pain of loss” and “healing” after grieving. And don’t we respond to another’s loss as if they’d been physically hurt? We take people flowers and food when they are grieving just as we do after they have a major operation.  I remember feeling physical pain when Luke died, when Tulip died, when Pippy Tay died, just as I did when my mother died. I told someone it felt like I’d had abdominal surgery. Turns out that’s exactly what my brain thought too.

And so, remember that when you lose a dog, or if you are still grieving for one you lost in the past, your body thinks you’ve been injured. It needs you to take care of yourself. It needs rest and comfort and flowers and sweet soup and gentle kisses and hugs.

As I write this, I think of my Lassie girl. Her 16th birthday party is planned for a few months from now. She’s doing amazingly well, but good grief, she’s old. Really old. It hurts to think of the future… I think tonight I’d better make some chicken soup and put it in the freezer.

Meanwhile, back at the farm: Lassie played tug with Willie this morning, oblivious as she is to calendars or human concerns about the future or the past. Willie got lots of sheep work this weekend, is a bit gimpy on his left shoulder but lordy we had fun. It’s fall in full force here: leaves turning cranberry, frost on the grass in the morning, lots of wild apples falling from the trees. Here are 2 photos from this morning, while feeding apples to some of the sheep.

Here’s Barbie impatiently waiting for me to drop apples into the feeder: 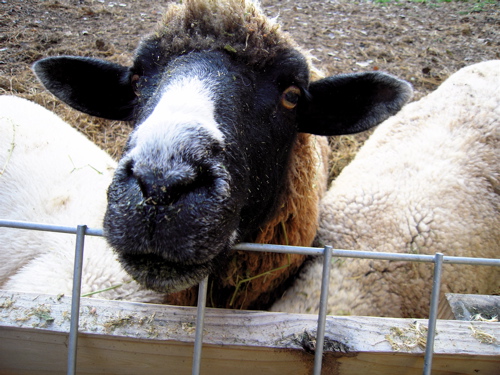 This isn’t the greatest photo in the world, but I wanted to show Martha chomping on an apple. Sheep LOVE apples, and right now Martha, Barbie and the lambs are all eating grass (from the front yard, best grass on the farm, courtesy of Will who can reliably keep them herded away from the road), a corn/oat mix, high quality alfalfa hay and lots of apples. Yum. 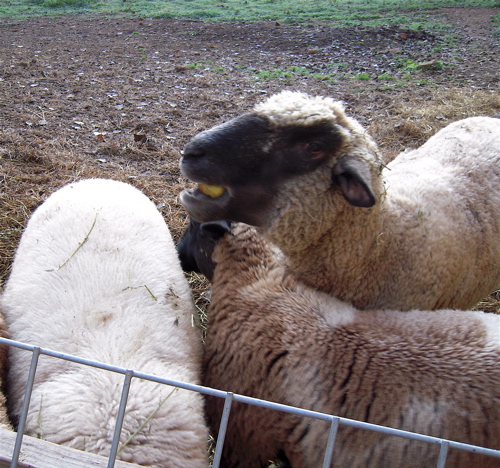