Welcome to an ongoing inquiry about the behavior of people and dogs.
Blog Home >> Animals >> No Training ’til 7-8 months?

Oh my. An alert reader sent me an blog from Psychology Today’s website. The essay is by Lee Charles Kelly, and argues that “dog training is no longer working that well” because we start “obedience” training too soon. The quote is actually attributed to Ian Dunbar, and Kelly uses that comment, and suggestions from psychologists that we shouldn’t push young children into cognitive tasks too soon, to argue that we have no business training puppies until they are adolescents. Ironically, he suggests that Ian himself is responsible for the “problem,” because he has encouraged people to take their pups to puppy socialization classes.

Could I disagree more? It would be hard … at least, if you define “training” the way I do. I’m talking about teaching a pup to associate coming when called to feeling happy happy happy, to learn it’s fun to be with you, that what you say has meaning and that there are ways to behave that makes life so very, very nice. I’m not talking about tossing a pup into a mosh pit of uncontrolled dogs, or forcing young pups with no ability to inhibit themselves for long periods of time to sit/stay for three minutes.

There are 2 assumptions in the Kelly’s article, one being that dogs are less well-behaved than they were in the past. Leaving aside the question of what that means (10 years? 20 years?), I’ve seen no evidence myself that that is true. I see people coming out of GOOD puppy classes and family dog training classes with amazingly great dogs. The dog Willie and I went on a walk with last week is 9 months old, was off leash for 45 minutes in the woods where we followed a trail of bloody snow and ended up at a deer carcass. Mico came when called every time, even when called away from a dead deer and and basically did every single thing he was asked the entire time we were together, off leash, in a highly distracting environment. Young Mico had a great time. And he’s has been through a series of good training classes, ever since he was a young pup.

The other assumption in Kelly’s blog is that young dogs aren’t capable of learning what we ask of them until they are adolescents. And here, god is in the details.  Should we be asking 10 week old puppies to sit/stay for 3 minutes? Of course not. Do people sometimes ask too much of young dogs? Yes they do. But that’s part of what good classes and books are for: to help people be realistic about the capability of young dogs, and to understand what dogs can learn and perform at what age.  That was a significant goal of Aimee Moore and I when we wrote Family Dog Training and Puppy Primer — to help owners understand what dogs can and can’t do at what age.

Bottom line: I just don’t see Kelly’s argument. When I first started in training and behavior (1988), all the classes were standard “obedience” classes, and were forced-based. The standard advice at that time was not to put your dog into classes until they were 7-9 months old, (because they couldn’t handle being corrected so harshly until they were adolescents). But that was then, not now. Are those the methods Kelly is talking about? I hope not: leash jerks and yelling NO are lousy methods, and shouldn’t ever be a part of training any dog, no matter how old. As Mico, and Willie showed, countless dogs who started “training” the day they went to their new homes, have lives of much more happiness and freedom than many dogs did before.

My general impression is that people who 1) use positive reinforcement with an understanding of how to make it work and 2) take their dogs to good classes, have dogs who are significantly more ‘obedient’ than the dogs I first saw 23 years ago when I first started in the business.

That said, I do think there are some cautions: Puppy socialization classes need to be highly monitored by experienced people or they create the problems they are supposed to prevent. Puppies and dogs do indeed need lots of free time to play and explore, and can be tired and constrained by over training. But avoid classes until your dog is eight months old? Oh my.

What do you think? Do you think dogs are less well-behaved than before? (you decide what ‘before’ means!). Should we wait til 7-8 months to take dogs to class? Here’s a tough one, and perhaps the most useful: is there something you tried to teach, or did teach your dog that you think you should have waited on? I’m all ears. . .

MEANWHILE, back on the farm. The good news is that much of the snow melted last week, and so Willie and I have been able to work the sheep up in the hill pasture for the last few days. Wheee! The bad news is that the snow still on the trail to the hill pasture first melted then froze solid and is now structured like frosting made out of cement. Imagine walking on ice that is uneven, full of dips and holes, and ridges and basically makes walking like having your feet beaten with baseball bats. I limped down the hill wishing I had dog paws, they seem to do much better on this weird surface we’re left with.

By the way, old buddies (who hadn’t met in many months) Mico and Willie did beautifully together last week, although I don’t think that would have been true if they both weren’t well-trained and responsive. There was what looked like a lot of competition between them (“I’m first on the trail and if you try to get ahead of me I’ll body slam you into a stop” – Willie. “And then I’ll throw my forelegs around your neck and attempt to stand on top of you.” – Mico). When they began to look too aroused, one of us simply gave them a cue: “Let’s go on a walk,” or a recall, or a “leave it”… both instantly obeyed and a good time was had by all. Good boys, good boys.

The lambs continue to do well. I’ve taken the twins off supplemental milk to see how they do. They bawl as if starving when I walk in the barn (okay, it’s hard to ignore them) but their bellies are full and Truffles seems to be giving lots of milk. We weighed them the last 2 weekends, we’ll do it in a week to see how they are doing. 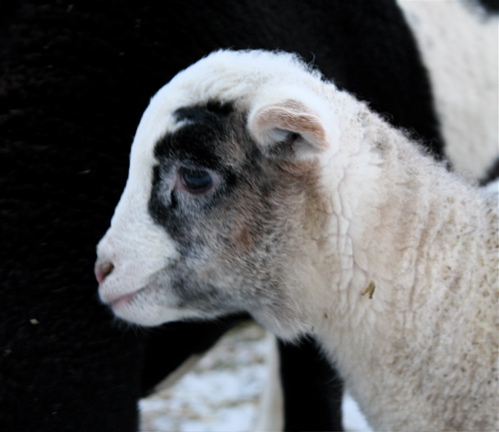 And here’s Clementine, a spitting image of her momma, Truffles, and the white ram lamb Franklin in the back: 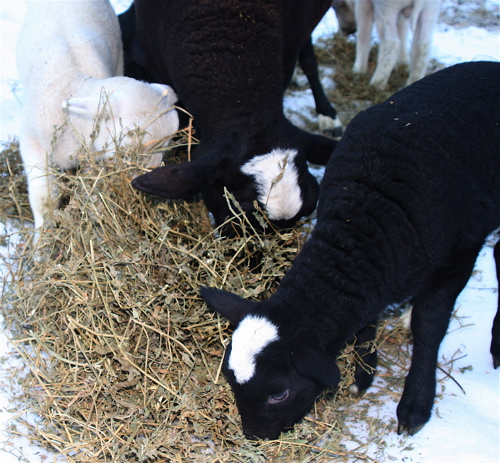