Welcome to an ongoing inquiry about the behavior of people and dogs.
Blog Home >> Animals >> Play Bows as Meta-Communication

We all know the signs of imminent danger between two dogs right? Immobile stiff bodies, direct eye contact, round eyes. Except when dogs are playing and then the exact same postures and expressions are nothing but pauses between frolics. That is a perfect example of what’s called meta-communication, or communication about communication.

Here’s a video of Willie and his new friend, Leo–the new pup of Katie Martz here at the office–illustrating meta-communication as well as any two dogs could. I look forward to your comments about it.

First, some background: Yesterday they met for the first time, and it went beautifully. Katie stood 40 feet from the door with Leo as I let Willie out and asked him “Where’s the Dog?” We played tug when he looked at Leo and then back at me. After 2 subsequent “autowatches” in which Willie looked at Leo and looked back at me without prompting (and was reinforced with a tug game for it), I released Willie to go meet Leo. He immediately ran over to Leo, who pilo-erected the fur on a dorsal line from neck to tail a little bit, but stood his ground and allowed Willie to sniff him. After a few short seconds Leo relaxed as Willie sniffed him, and both Katie and I felt sure (we discovered later as we talked about it) that he was about to put his forepaws onto Willie’s back. I wasn’t sure how that would go over with Willie so I said “Go to the barn!” to keep their first greeting positive. It all happened so fast I was acting on gut feeling as much as anything else, having learned with Willie and hundreds of client’s dog to avoid extended greetings between dogs. So Willie dashed off toward the barn and their first encounter went well.

Quickly we moved into a fenced 3 acre pasture, and both dogs got to run together off leash. They played beautifully together, although Leo is too young and small to keep up with grown-up, long-legged Willie. There’s a lot going on in this short video, but first watch how Leo’s long play bows correlate with both dogs standing stock still and staring directly at each other. Those signals, normally signs of trouble are not a problem however, because as meta-communication, play bows signal the other dog that stiff bodies and direct stares are just in fun. Just as a football jersey means a tackle isn’t true aggression (okay, maybe American football is a bad example?!), play bows signal other dogs that any behavior to follow is meant as play. That’s why you see them most often between unfamiliar dogs as they begin to play together.

Watch as Leo does beautiful, clear play bows at second 8, 20 (behind my legs), 118, 126, 148 while he and Willie stand stock-still. I love how both dogs stay still until one does what’s called “start-stop,” that quick little lunge that elicits a reaction. (I do it myself to see what will happen at second 40.)

Watch too how Leo runs to me and sits beside my legs at second 30. My interpretation of this behavior is that it’s done by dogs who are a bit intimidated by another. There is a great interaction between the dogs right after that, with Leo doing what looks like an abbreviated muzzle punch at second 33 and then licking Willie’s muzzle.

If you watch the video to the end you’ll see Leo squat and pee, and then turn and look back toward Katie. He’s learned if he pees outside he gets a treat, and boy did he learn that lesson well!

There’s lots going on in this video, I’d love to hear any of your comments about what else you might have observed. If you’d like to read more about play, you might want to go the section in the Reading Room on Play, or check out the Dog Play DVD or Play Together,  Stay Together about play between people and dogs. I’ll look forward to reading your comments, and not to mention welcoming Leo back to play with Willie.

MEANWHILE, back on the farm: What a treat for it to be winter! If it’s going to be dark at night darn it, at least it can be crisp and pretty. And it is. I am loving the snow on the ground, although it is not much and melting fast. But it’s sunny and lovely and fresh and your boots crunch on the snow while the Chickadees call CHICKA-DEE-DEE-DEE from the woods. Time to take Willie boy and Tootsie girl on a walk. I hope you have some weather you can enjoy too. 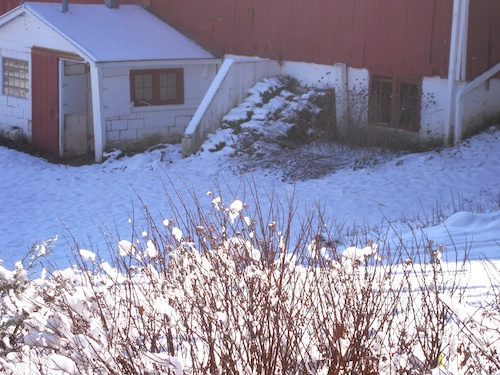 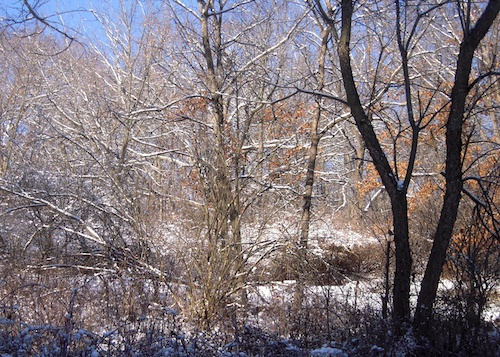 « What’s In Your Library?
Thank You and Happy Holidays! »