Welcome to an ongoing inquiry about the behavior of people and dogs.
Blog Home >> Dog Behavior >> The Black Dog Syndrome – Fact or Fiction?

We all know about the “Black Dog Syndrome,” the belief that all black dogs are harder to place from shelters and rescues than dogs of other colorations. I’ll admit that when I first heard about it I didn’t question whether it was true. For one thing, when I bred Border Collie puppies I saw a strong bias for pups with white on them and against all black pups. Every once in a while a buyer would tell me that they especially loved the looks of the “plain,” all black pup, but they were the exception, not the rule. The second reason I assumed the Black Dog syndrome was true was that so many people in shelters told me they experienced it at their facility, that indeed, in their experience, all black dogs were harder to place than others.

However, I just read an interesting blog on the ASPCA site about the issue, written by Dr. Emily Weiss. In it she recounts the result of a study done by PhD psychologist Lucinda Woodward et al, and published in Society and Animals in early 2012. In summary, they found that breed had a significant effect on participant’s perception of the dogs, but color did not. As a matter of fact, in a study looking at breed versus color effect, black labs were rated as significantly more friendly, less dominant and more submissive dogs of dogs of seven other breeds, with only the Golden retriever rated more highly. (The breeds were: Border collie, Boxer, German shepherd, Golden retriever, Black Lab, Pit bull, Standard Poodle and Rottweiler.)

This is not surprising when you think of it, given that black labs are the most popular breed in the U.S. last I looked. (Which in itself should give us all pause about the “black dog syndrome.”)

In addition, in a related study that focused on color and size in just one breed, all black poodles were judged to be friendlier than all white ones (and small white poodles were categorized as the least friendly!). These results suggest that color might not be as important a factor as we have assumed. Rather, the fact that so many black dogs hang out for long periods in shelters may be attributed to the fact that there are simply more of them.

Clearly we need a lot more research on this topic. Although this study is interesting, and I would argue important, in that it gets us into a conversation about what makes dogs attractive to people (which could help shelters place more dogs), it is just one study. It’s conclusions are indirect: just because a group of people rated some dogs as more friendly than others doesn’t mean they would necessarily adopt them from a shelter. But it is a good start.

I have two questions I’d love to ask of you: One is directed to shelter and rescue workers: What is your own experience? Think hard about the relationship between breed, size and color, related to the number of dogs that enter your care and the number that go out. I’d love to hear your thoughts. Secondly, what about you? I’m getting personal here: Do you have certain colors of fur that you like better? I do, although it feels almost shameful to admit it. I hereby admit to liking some colors better than others. For example, I was hoping for a Blenheim Cavalier when working with Cav rescue groups, and I admit to really, really wanting one. I just love looking at that particular color pattern. And then Tootsie showed up and was friendly, and sweet and cuddly and no one else seemed to want her and how could I possibly pass her up because she didn’t look exactly like I wanted her to? Of course I did adopt her, and I’m glad every day that I did. This morning I laughed out loud watching her ears flying as she ran to the barn. But I still admit that some  colors make my eyes happier than others. Anyone else willing to admit to same?

MEANWHILE, back on the farm: Most of the snow is gone now, and what remains is patchy, frozen solid and difficult to walk on. It’s not very pretty, but more than that, the snow that remains resembles slippery cement more than anything else, and I worry about Willie’s shoulder on a daily basis. His “slow down” cue comes in handy here and I probably use it 20 times a day. Then again, I expect I’ll be asking Willie to slow down until the day he dies.

The good part about the snow having partially disappeared is that the upper pasture, which is in full sun all day, is now completely clear, so Willie and I got to work sheep for the first time since November. We had great fun, but I found I needed to remind myself to tell Willie if he was right or wrong, rather than telling him what to do. Old habits die hard, hey? The bad part about the snow melt is that it is supposed to get bitter cold in a few days, which will be hard on the plants without an insulating cover of snow. Not to mention that my desire to be outside wanes as the thermometer goes below zero Fahrenheit.

Here’s an area beside the driveway that gets some sun during the day, but only a few hours worth. Not especially scenic, but then, it’s not always a calendar cover out in the country. 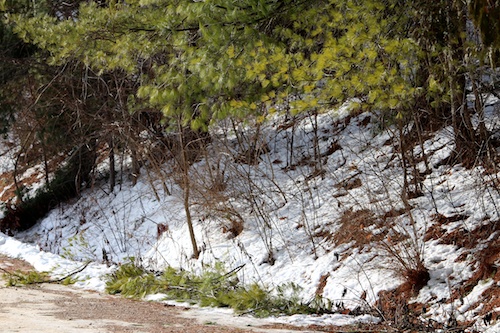 I played a bit with my new camera this morning. Here’s Mr. Willie helping me out. I changed the auto focus to focus only on the center point, and not to average all the focal points as most cameras do unless you set them differently. I like the results, although it looks to me as though I focused more on the middle of his face rather than his eyes. Gotta work on that. 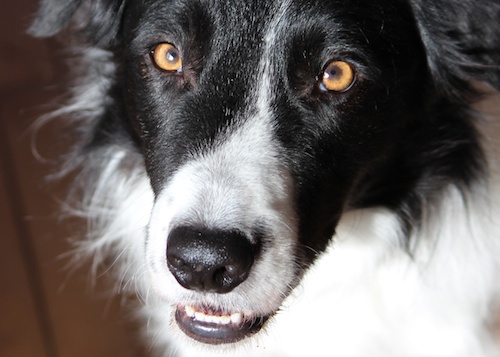 By the way, speaking of pictures… check out Facebook next week when we post the 5 finalists for the “Take the Pledge” contest. Here’s Willie taking the pledge to be a good, good dog in 2013! 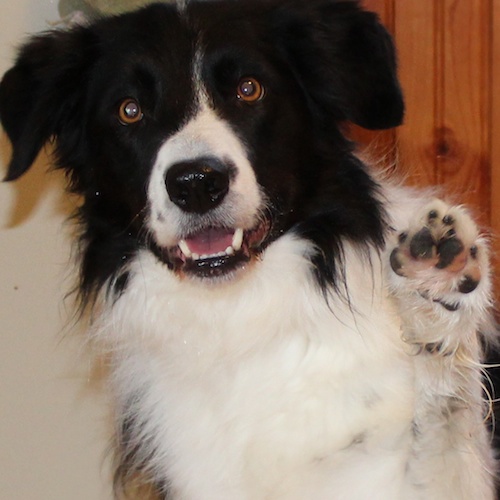