Welcome to an ongoing inquiry about the behavior of people and dogs.
Blog Home >> Animals >> Are Pets Important? Will Comes into his Own.

I was working on my new book, coming out from Dogwise in early November, and found a section that relates, I suspect, to the cancellation of my radio show, Calling All Pets. The book, coming out from Dogwise, (Tales of Two Species) is a collection of my columns from Bark magazine. One of them is titled “Pet Peeves.” In it I write about our country’s ambivalent feelings about our pets. On the one hand, many of us love them, treat them like family and can’t imagine life without them. They are as important to our well-being as is literature, music and art. (For some of us, I’d add food, water and oxygen.) And yet, look at how often we hear people say, demeaningly, that an animal is “just a pet.” Here’s an excerpt from the essay:

“Just a pet.” How many times have you heard someone say that? Perhaps it was a conformation breeder who observed, “This pup doesn’t have a good top line, so he should be sold as just a pet.” You’ve probably read the phrase in articles about how much we love our companion animals: “It is remarkable how much money the American public spends just on pets.” And companion animal owners use it—ask any veterinarian, who too often hears: “We just adore our little Cocker Spaniel, she’s the greatest joy of our lives, but we can’t afford to spay her because she’s just a pet.”

Part of the problem, I suspect, is the derivation of the word “pet.” It began as a reference to a spoiled, over-indulged child and only recently has been used to describe the dogs and the cats sharing our homes. “Spoiled and over-indulged” are not words designed to engender respect or importance, now are they? It seems that the American psyche is highly ambivalent about our companion animals… either acknowledging how much they add to our lives, or dismissing them as trivial things, something akin to children’s toys. Nice to have around, but not really important. I wrote about this at length in the afterward to For the Love of a Dog–trying to explain why those of us who love dogs so much are not neurotic or socially challenged, at least not any more than the rest of the country. One of my favorite books about the bond between people and dogs is Pack of Two, by the late (and amazing) writer, Carolyn Knapp. It is a beautiful, beautiful book, and if you haven’t read it, go get a copy right now. I deeply regret that she died, tragically, before she was able to grace us with more of her writings (and, selfishly, before I was able to meet her).

I am curious what others have found. Do you also wonder sometimes if the world sorts into two groups? Group one includes those whose love for animals informs each and every day of their lives (in this case I mean companion animals, but there’s much to say in later writings about the importance of our connection to wild animals and an understanding of their behavior). Group 2 includes people who can take them or leave them, being indifferent to pets at best and those who love them, or at worst demeaning the bond between people and animals as an example of social ineptitude. Of course, I’m oversimplifying, but I’m curious what others experience.. do you often feel like you have to justify your love for your dogs, cats, horses? (ferrets, cockatiels, rats, etc…)

Meanwhile, it’s a gorgeous fall day here. My digital camera broke this morning, or I’d show you more pictures of Will working the lamb flock. I am busting out of my britches with pride for him… he is blossoming every day into a wonderful working stock dog. This morning the biggest ram lamb (probably 100+ pounds) turned to face Will down, ducking his head and threatening Will with a charge. Will held his ground (they were face to face, about a foot between their eyes) and stayed cool (I was saying ‘Stea-a-a-a-a-a-dy’ in my lowest and most soothing of voices) and the lamb finally turned and went where Will told him to. A few months ago Will would have exploded at the lamb, not biting but charging forward. That was okay for a young dog; the dog has to win in situations like that (sheep are not stupid, they learn very fast if they can beat a dog) even if the process isn’t elegant. However, it’s much better to keep things calm and quiet. A year ago Will would’ve backed up and the ram lamb would’ve won unless I came in to help (which I would if necessary.) Will just recently turned two, and it is a beautiful thing to watch him grow up and learn to control his emotions, and take charge when he needs to.

But still, really, Wll’s primary value to me is as a companion dog. I guess that means, when it comes down to it, Will is ‘just a pet.‘ Like Lassie, he adds love and light and joy into my life every day. What a gift.

Here are some photos from the last few days. The first shows Willie moving the lambs a few days ago into the orchard pasture (from which they escaped, got in with the ewe flock and probably bred their mothers. sigh.) 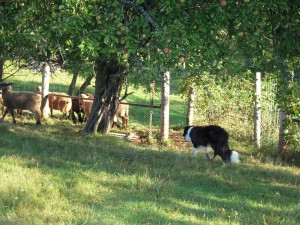 This is Lassie digging in the grass (a favorite activity for her) behind part of a huge dead elm clump that had to come down. Cutting it up into firewood and making the rest into wood chips for the garden will take up most of this coming Sunday. 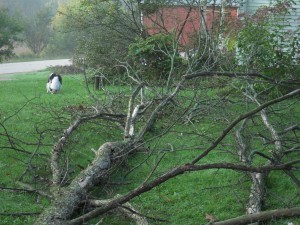 The last photo is of a Katydid.  (who I originally identified as a Snowy Tree Cricket until graciously corrected by a reader! Whoops….) As common as Field Crickets and Katydids are here in Wisconsin, Snowy Tree Crickets are also common, and can tell you the temperature (no kidding). Just count the number of their chirps in 13 seconds (okay, I’ll admit, you often have to record them and slow it down to count!) and add 40, and you’ve go the temp in F. This photo was from a long courtship between a male and a female, all on the side of the house. 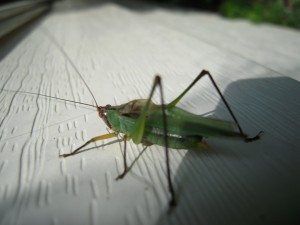