Welcome to an ongoing inquiry about the behavior of people and dogs.
Blog Home >> Canine Cognition >> Dog Training and the “D” Word

I’ll start with the bottom line. I don’t use the word “dominance” when talking to people about training their dogs. There’s just no profit in it. Even given that dominance is about “priority access” and “social freedom,” but not about how to get it, I still see nothing but the potential for confusion and misuse. Given that in general parlance dominance means “total control,” and that it is so often it is equated with force (completely inappropriately), I avoid the term as if it were toxic.  Which is exactly what I think it can be in this context.

Look at all the absurd uses of the concept sent in by readers. “Expressions of dominance” include: A dog sitting with its back to you, forging in front on walks, jumping up on people, pulling washing off of a clothes line (one of my personal favorites), acting scared when someone approaches, a “refusal to be potty trained,” (did the dog hire a lawyer?), using signs of fear or appeasement to manipulate their owners (no kidding), and another personal favorite–dogs who are good retrievers as youngsters should be avoided because they are acting as alphas by provisioning the pack (bringing back a chicken in this case) and are thus predisposed to be dominant. Oh my. Oh my my my.

Thank you all so much for adding fuel to my fire that we need to drop the concept of dominance in relation to dog training. However, if we put aside the issue of training, and take an intellectual look at the issue of social relationships in depth, the waters can get a bit muddy. Independent of issues related to training, the questions still remain: How DO dogs perceive us? Is there any possible relevance to social hierarchy in our relationship with dogs? One reader responded to an earlier post that if dominance is about priority access to resources, we need to acknowledge that most of us inherently have that. We control the doorway, the food, the toys, when dogs potty, etc etc.

There are good arguments on either side of this question. On the one hand, social hierarchies are always between individuals of the same species, so how could they relate to relationships between people and dogs? On the other hand, why do dogs use the same social signals to people that they do to other dogs if they don’t see us as part of their social units? Why do some dogs grovel with appeasement displays, and others go stiff and hard-eyed when we go to pick up their bone? How do we describe those dogs? Because I think the issue is so complicated and so easily misunderstood, I tend to use terms that avoid the D word.  I might describe a dog as being “on offense” if it goes stiff and presents what is called an “offensive pucker.” I’ll talk about a dog with an appeasement display that includes flattened ears and a retracted commissure or “submissive grin” as it is often called. (I realize, as I am writing this, that I am still more likely to describe a dog’s posture as ‘submissive,’ perhaps because I find it so descriptive and because I don’t see people abusing that term like they do “dominant.”)

Personally, I do suspect that there are some aspects of social hierarchy that relate to our relationship with our dogs. However, I also think it is exceptionally complicated and easily misunderstood. I think we have a lot to learn about how dogs perceive us, and how they categorize us in relation to other dogs. We clearly are not dogs to them, but then… we clearly are members of their ‘pack.’ I have no definitive answers to this question, but I love pondering the question. It’s a little like thinking about how many stars there are in the sky….

Soon I am going to write about another aspect of our relationship with dogs that I think is important, and that’s the concept of “leadership.” I know that some of you will disagree, but I truly believe that because dogs are so completely dependent upon us, they are happier and more secure if their humans exemplify the best of what we think of as being a good leader. You know: the person everyone wants to stand beside, and automatically wants to be chair of the committee even though he or she never volunteers for it. I talk about being a “benevolent leader” in some of my writings, although I deeply regret that even the term “leader” has been co-opted by some to be equated with “dominance.” I don’t think it is, any more than good parents or good teachers are ‘dominant.”  Stay tuned for more …. but I gotta go now and get more milk for the bottle lambs.

Meanwhile, back on the farm, and speaking of bottle lambs, it is still all about the lambs at the farm. Explodo ewe is still holding out, and Truffles bag is still full and hard and giving almost no milk. Her triplets are bottle junkies now, and feeding them 5 times a day is getting a bit tiresome. I’m leaving now to go get more milk and set up a self feeder, which will help tremendously. I was hoping my Chinese medicine vet could come out, because western medicine has not been successful in clearing up Truffles’ udder, but my vet is booked solid for the next 10 days. Still have my paws crossed though, optimistic that I am. Truffles triplets are flourishing, at least the 2 Bl & Wh ones are. The little white ewe lamb is a fussy eater, and isn’t getting as much milk as the others, but she’s hanging in there. I tried to get a picture for you, but I can’t get them far enough away from me to get much beyond this: 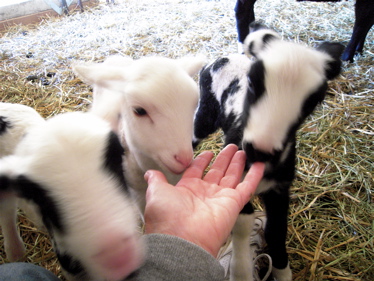 Apologies, I seem stuck on pictures of lambs and spring flowers: Here’s another spring ephemeral, called Pasque Flowers, from Walking Iron County Park outside of Mazomanie. A gorgeous set of prairies and native wild flowers…. 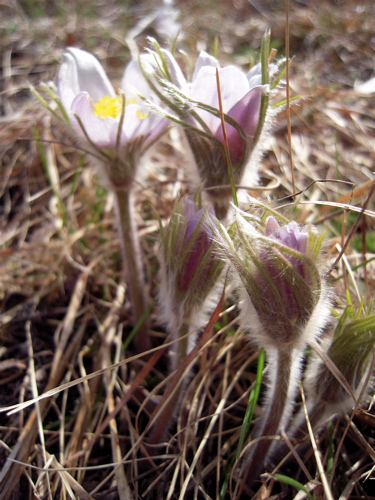