Welcome to an ongoing inquiry about the behavior of people and dogs.
Blog Home >> Dog Behavior >> Leadership and Frolicking Lambs

One last comment, for now, about our relationships with our dogs.  I had mentioned in the last post that I believe that dogs do better if they see us as what I call “benevolent leaders,” in the sense of good parents or good teachers. Here’s my thinking:

Dogs are dependent upon us, granted some more than others, but most of our dogs have no control over when and what they eat, where they spend their time and who they spend it with. They can’t open the door to go outside, they can’t leave their social group to go find another one that they like better, and they can’t provision themselves with their preferred food. They have to know, at some level, that we hold most of the cards. We are able to open doors, we are the ones who can open the cabinets and get out the dog food and we decide who makes up the “pack.”

Because of that, at least in part, dogs know that we have more “social freedom” than they do, and much of their life is dependent on how we use it. Let me be anthropomorphic for a moment . . .not always a good thing, true, but sometimes useful. If you were dependent upon someone else, how would you like them to behave? Think of a great boss, or a great teacher or ideal parent. Wouldn’t they be a person who 1) was clear and consistent, 2) established clear and reasonable boundaries  and 3) saw you for who you really are, and acted in ways to bring out the best of you and inhibit your dark side?

I think that insecure dogs especially are in need of people who teach them to be patient and polite, who help them learn to inhibit impulsive behavior, and to establish boundaries in a fair and clear way so that everyone knows what to expect. We know that part of what makes a social animal nervous and insecure is a lack of ability to predict what is going to happen to them. And more than that, I think insecure dogs need a sense that their human is someone that they can count on, to take charge and get them out of trouble when necessary, and to create clear and fair boundaries that help them learn emotional control.

I have seen so many dogs in my office whose owners adored them, but who were afraid to deny them anything. No boundaries, no rules beyond “please don’t pee in the house.” I had one client whose dog began to growl at her because she didn’t get up out of her chair and go across the room to pick up a toy for the dog. This particular dog had taught his human, literally, to fetch for him, and if she didn’t pick up on his cues fast enough to pick up his toy and hand it to him, he began to growl and threaten her. And yet, I got no sense that this was a happy dog. You might think that he was in heaven, living in some kind of canine fantasy with a person who waited on him hand and foot.  But he was nervous and insecure, and after we started using positive reinforcement to teach him other ways to behave, and decided on some reasonable boundaries, he not only stopped bullying  his owner, he seemed like a much happier dog.

And so, although I have concerns about what the word means to some people, I still use the term “benevolent leader,” in the belief that most dogs are relieved to be able to count on their human to, as one dictionary defines “to lead,” to “guide something along the way.” That’s not a bad thing to do for the animals who are so dependent upon us. We just need to do it with love, patience, benevolence and most of all–a good sense of humor.

Meanwhile, back on the farm: It’s exquisite spring weather, 60’s and sunny and all emerald green grass and liquid bird song. Here are 2 of the 3 bottle lambs that Truffles doesn’t make enough milk for. They are just starting to frolic after getting their bellies full of goat milk. 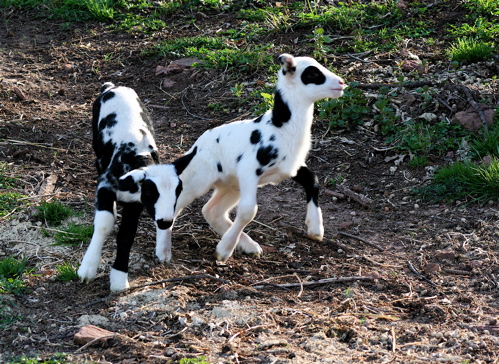 And here are the 3 ewes who lambed most recently. The rest of the flock has dashed up the hill for 2 acres of clover and grasses, while these 3 stay closer to the barn. That’s Truffles, the ewe with the problem udder, on the left. Her 3 lambs are the ones on the left too, although the one with the most black is in the foreground. Dorothy is in the middle with her twin lambs, while Snickers is on the right with her all white triplets. Snickers and Dorothy are especially cautious about leaving the safety of the barn. Dorothy is so cautious that I have to feed her separately because she is hesitant to leave the barn to feed with the others. Her lambs are tiny, tiny tiny tiny, but their little bellies are full when I check on them. I gave Dorothy extra grain last night because I’m a tad worried that she isn’t getting enough food.

As I write this they are all at the top of the hill on an Irish green pasture. I can almost hear them tearing the tips of the grass off as I write . . . 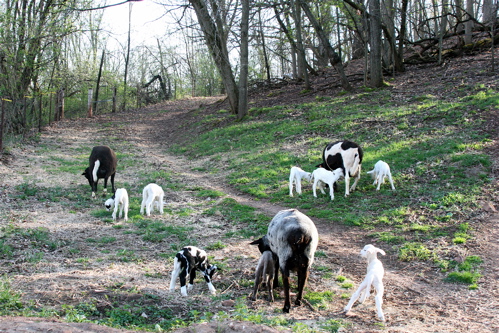 « Dog Training and the “D” Word
“Responsible Breeding” an Oxymoron? »