Welcome to an ongoing inquiry about the behavior of people and dogs.
Blog Home >> Animals >> New Info about Treatment for SA? Yes and No.

A study came out recently in Applied Animal  Behavior Science that suggests that Counter Conditioning (CC)  is not an effective way to treat Separation Anxiety. Since I’ve been advising the use of this method for many years, my ears pricked up in hopes I’d learn something important about how better to treat this serious behavioral problem.  The study, by Butler, Sargisson & Eliffe, concluded that Desensitizing (DS) was the successful element in the treatment of SA in the 8 dogs in the study, while CC and “behavioral advice” was not.

We got the article, and I read through it carefully. And then I read it again. And yup, one more time. And then I emailed some of my colleagues and asked “Am I crazy?” I thought I might be losing my mind because try as I might, I could not match the design or results of the study to match the conclusions.

Here’s what’s going on: The study found 8 dogs who were destructive or problem barkers when left alone, and only when left alone. They did a good job of singling out dogs who truly suffered from some form of what they call “Separation-related problem behaviors.” (I suspect they don’t use the term “anxiety” because they don’t want to presume what’s going on the the dog’s mind. I’ll save that for another discussion!) The authors then instructed the owners to use what they called DS and CC, but there’s the rub: Although they define DS correctly as the”gradual and progressive introduction of the stimulus eliciting the phobia,” they define CC as a situation in which a “behavior incompatible with anxiety is explicitly trained when the anxiety-provoking stimulus is introduced. “Whoa, that’s not even close to how CC is defined. CC isn’t about training anything, it’s about pairing a very low intensity of a stimulus that evokes fear with a high intensity stimulus that evokes a positive emotion. For example, a dog afraid of strangers would be CC’d by having a visitor stand outside the door (low intensity because they don’t enter the house) and toss pieces of chicken (high intensity). Over time, and lots of repetitions, the dog’s emotional response to the food becomes attached to the visitor as well.

In the study, the owners were asked to do both CC and DS at the same time, except their “DS” involved leaving the dog for a short period of time (beginning with 5 minutes) with food which makes it more like CC. At the same time, they were to pair behavior associated with leaving with food AND were told to give the dogs food when they returned, which has nothing to do with CC’g an owner’s absence. Say what? Argh, I am much happier being a cheer leader than a critic, but this methodology is so mixed up I can’t imagine what the results would tell us. Moreover, their conclusion that DS works and “CC” doesn’t is based on the fact that, even though all dogs improved, 2 of the owners didn’t do any CC, and their dogs didn’t do any worse than the others. They even added that 2 others of the group didn’t follow CC instructions, so 4 of the 8 owners didn’t actually do what they authors defined as CC, and that wasn’t even CC to begin with. But then, DS wasn’t really DS either. Oh my.

Here’s the good news: Nicole Wilde has a new book out on Separation Anxiety, Don’t Leave Me, and it’s a good one. It’s much longer than my booklet, the 38 page I’ll Be Home Soon, which was written primarily for trainers and behaviorists to give to clients to supplement their instructions. Don’t Leave Me is 150 pages long, and does a good job of defining the problem and suggesting a variety of treatment methods. I have some minor quibbles: I don’t agree that exercise is helpful for most cases of SA (even though it’s generally a wonderful thing) and I suggest spending more time CCing the first phases of leaving (ie, get keys, give chicken), but overall this is a great addition to either a trainer’s resources or a good book for people whose dogs suffer when they are left alone. I like her attention to a broad range of perspectives, from DS to CC to Dog Appeasing Pheromone, Body Wraps and music designed to calm a nervous dog.

Question for trainers and behaviorists: We are thinking of offering a package of one of Nicole’s books with 10 of my booklets, the idea being the book would be in the trainer’s library and the booklet go to clients. Think that’s a good idea? We’re all ears.

MEANWHILE, back on the farm: Well, it’s our turn now. We’re expecting 10-20 inches of snow in the next few days. It’s snowing like crazy right now, so it looks like the predictions are accurate. Darn, I had just gotten back to working sheep again, after a two week hiatus due to a bad cold and extra cold weather. Oh well, I’ll be in Texas this weekend anyway (if we can fly out of here, all paws crossed!) being forced to speak at the Lake Austin Spa Resort in between lying in lounge chairs and getting a massage. Poor Jim is forced to come too, poor baby.

So we’ll miss a weekend in the snow, but Willie loves it because it means he is allowed to jump for an aerial frisbee, the snow cushioning the impact on his shoulder when he lands. Here’s my absolute all-time favorite frisbee photo of Willie, taken NOT by me but by my great assistant, Katie Martz and then tinkered with by me with my new-found Aperature skills. (To the person who inquired, yes, I am loving Aperature, although I still am not close to an expert at using it yet.) This picture made it easy! 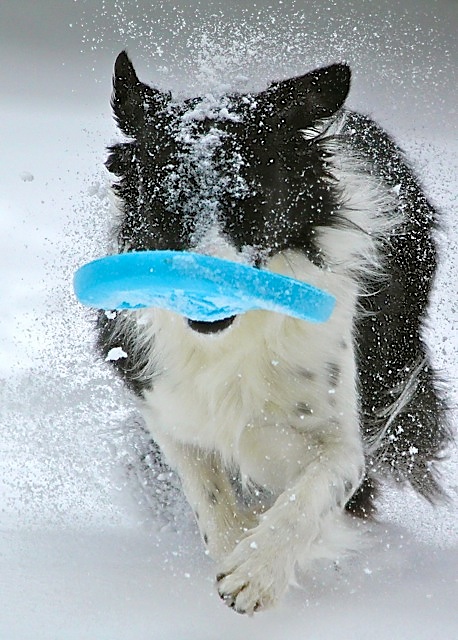