Welcome to an ongoing inquiry about the behavior of people and dogs.
Blog Home >> Animals and the People Who Love Them >> A Bark by Any Other Name . . . 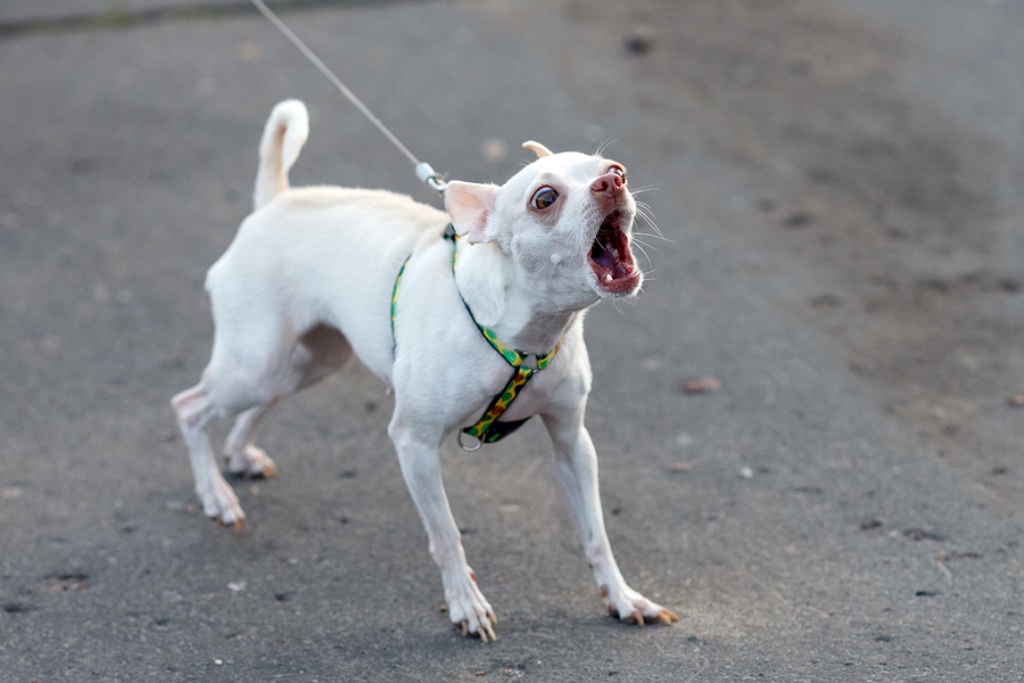 (Note: Would some one please trim this dog’s nails?)

This is a repost of an article I wrote in 2014 (July 7) about the motivation behind barking. Since it’s been five years, and since barking plays such an important part of our experience with dogs, I thought it would be fun to repeat it. I’ve done some minor updating, but the post still focuses on the age old question Why Do Dogs Bark? Seems like the answer should be simple, right? But, it gets a bit complicated when you start to think it through, including the reminder that adult wolves rarely bark, adolescent wolves bark more often, and that barking is energetically expensive and therefore has a “cost”.

Have you seen the stage play, Sylvia, in which a man brings a stray dog home from the park and adopts it? The dog is always played by a woman, who often barks at appropriate moments. Except, as a person playing a dog, she doesn’t say BARRR RARRR or WOOF. She says HEY! HEY! HEYHEYHEY!!!

I saw the play with a girlfriend, another dog lover, and we both thought that “Hey!” was a brilliant translation of dog barks. Not to mention being hysterically funny. Every time we saw each other for months afterwards we’d bark HEY! HEY! HEY! at each other. And crack up like school girls.

But what motivates the dog to bark?  We don’t know, but there are two primary hypotheses from ethologists about what is going on when they do. Hypothesis one suggests that barks are examples of “referential communication,” in that each bark refers to something specific, like an approaching visitor, or a desire to play. In this case the dog is providing information to the recipient(s). In the case of the visitor, it could be “Stranger coming, need back up from the pack!” and/or “Stay away from here unless you have authorization!” We know that at least some animals communicate in this way, including the well-studied 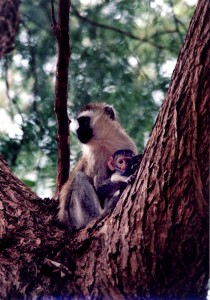 Vervet monkey, who has different alarm vocalizations dependent upon the category of danger.

This parallels the hypothesis of Sophia Yin, DVM, MS, who argues that the barks of domestic dogs are related more to context than to the dog’s emotional state.

2) The second hypothesis about dog barks is that they do not specifically refer to a person, place or thing, but are expressions of the internal state of the dog. That is the argument of Kathryn Lord, PhD, who made a compelling case for that interpretation at the 2014 SPARCS conference in Rhode Island. Dr. Lord cited the well-known “Morton’s rules,” in which high, “thin” sounds (narrow band) correlate with fear or affiliation, and low, “thick” (broad band) sounds relate to threats. (See page 114 in Morton’s article.) Morton noted that barks, common in many species including deer and monkeys, are sounds that combine the features of both fear and threats. They are used by a variety of animals when in danger, but when they are also unwilling, or unable to run away. They are most common when predators approach a nest or an animal’s young, and thus the adult is in danger but can’t run away without losing its young. You can read an abstract of this argument here, or find the entire article online if you have access to the journal.

What is important to note is that both hypotheses allow for the receiver to be able to distinguish the context in which the bark is given. We all can tell a play bark from a threatening bark to a stranger, because for one thing, it is higher pitched. (Which, of course, follows Morton’s rules.) However, knowing that your dog is barking at a stranger approaching the house, instead of barking another dog away from a bone, does not tell us what the noise actually means to a dog or why she is doing it. It does mean that we have learned to associate a particular bark with a particular context, but that could be because the dog is specifically signaling “stranger coming” or is expressing ambivalent emotions that correlate with “Uh oh, trouble coming, I’m worried, pack, come back me up!” along with “You! Stay away from here.” Or, of course (and you knew this was coming), it could mean: HEY! HEY! HEYHEYHEYHEY!!!

Here’s Maggie saying something like that when I knocked on the door as if a visitor had arrived. (I evaluate her face as looking both nervous and expressing a mild threat, which fits Morton’s rules and how she behaves until she gets a sniff of anyone new and then is thrilled to see them. We’re working hard on counter conditioning her to visitors, which involves lots of treats being thrown in the driveway. Tootsie and Willie love it, they get to search for the goodies along with Maggie. (Note: The photo below was taken not long after we got Maggie and she behaves very differently to visitors, although there is still a small component of discomfort when she first sees someone approaching.) 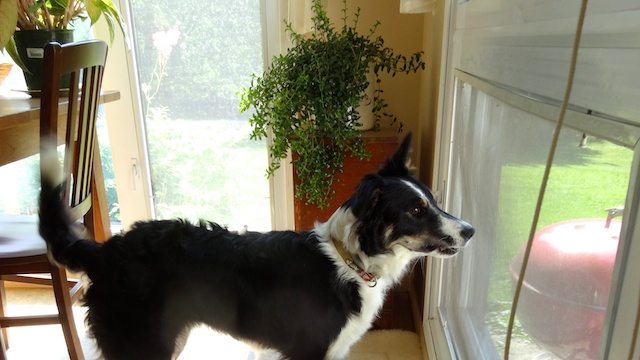 I would argue, however, that there are other reasons for a dog to bark. One primary one, familiar to most dog owner’s, is to get attention. I suppose you could make the case that this is a kind of referential communication, less about emotional state than conveying a specific message, but perhaps not. “Feeling needy, need something, will bark at human to get what I want…”.

What do you think? Remember that being able to interpret your dog’s barks (and the research of Pongracz ’05 and Molnar ’06  suggests we are all pretty good at this, for an update see Pongracz 2010) does not tell us what message is being sent by your dog. Both hypotheses allow for nuanced interpretations. Neither hypothesis is exclusive–it seems to me that both “referential” and “emotional state” could overlap and be conveyed simultaneously. You? A second question–where are you on the “I want my dog to bark” versus “I can’t stand barking” continuum? I’m pretty much in the  camp of “three barks to alert me are great, but after that you can stop now”.

[By the way, this blog obviously is not about how to deal with a barking problem, but here are two books that do a great job of it: The Bark Stops Here by Terry Ryan and Help! I’m Barking and I Can’t be Quiet by Daniel Estep and Suzanne Hetts. (A great title if I’ve ever seen one.)

MEANWHILE, back on the farm: I went looking for the cats to take some photos on a cool, sunny Saturday afternoon, but couldn’t find them in any of their usual places. Not in their cozy house in the garage, not curled up in the director’s chair in the carport, not perched charmingly on the wall, nor in the barn. But I almost stumbled onto Nellie while walking back to the house. She was sprucing herself up amongst a new planting of decorative onions. We all need a little privacy when bathing. 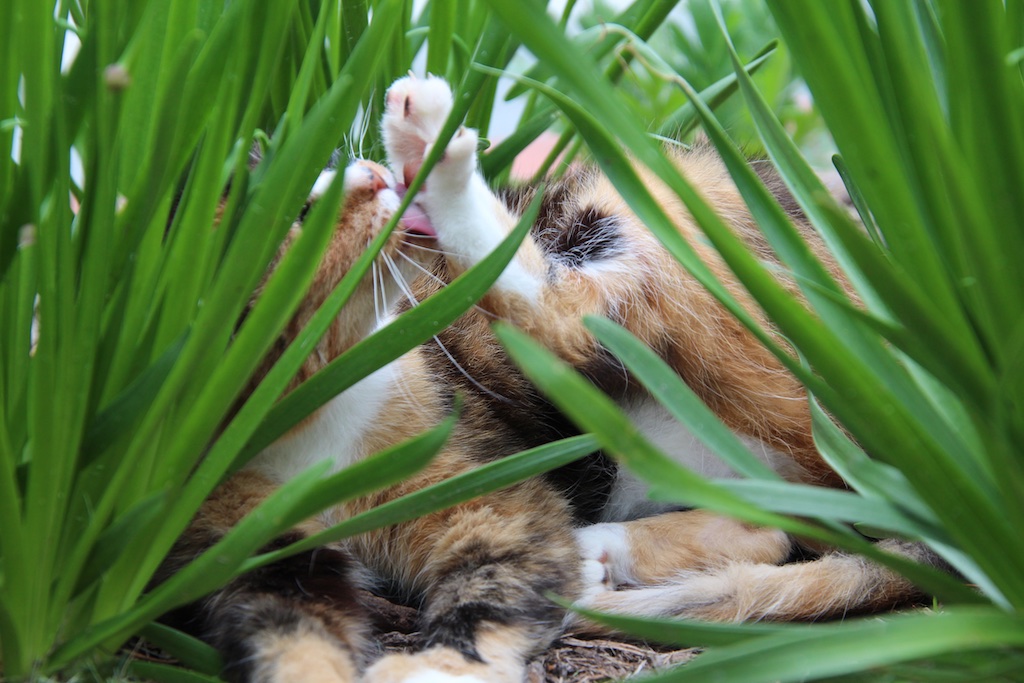 We got back recently from the “rainy” Northwest, where to my surprise the grass was brown and they had experienced very little rain. In contrast, it’s like living in Ireland here in the Midwest. Our grass is gem-quality green, thanks to a lovely alternation of rain and sun. (Not so lovely if you are a farmer with heavy equipment. It’s been a nightmare for many agriculturalists, who haven’t been able to plant their fields week after week after week.) 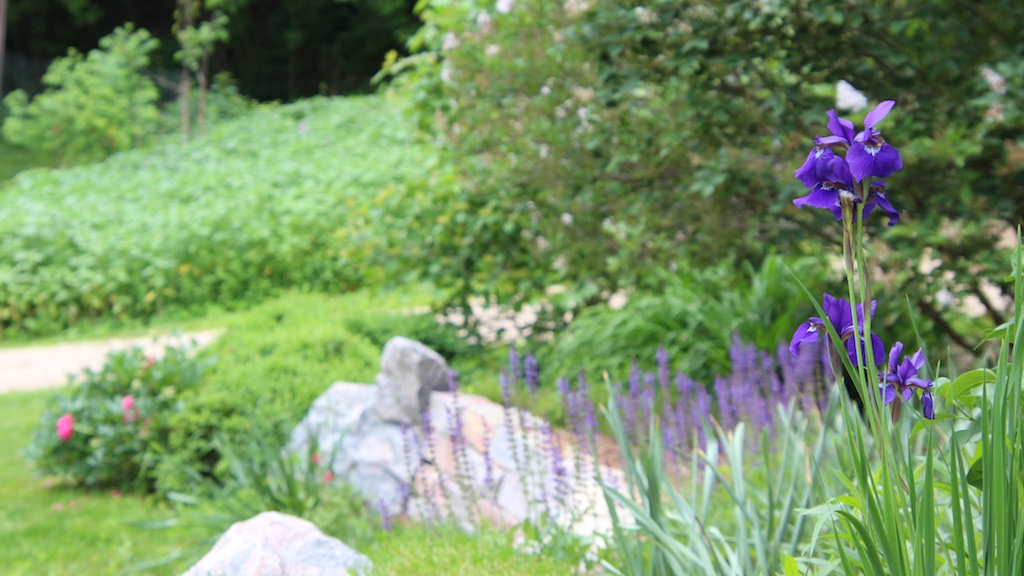 It’s also ridiculous cool. I’m writing much of this article mid day Sunday June 16th, and it’s 55 degrees outside. Most years it would be hot and humid by now. But, as we all know, there’s no “normal” any more. But damn, it’s pretty now . . . 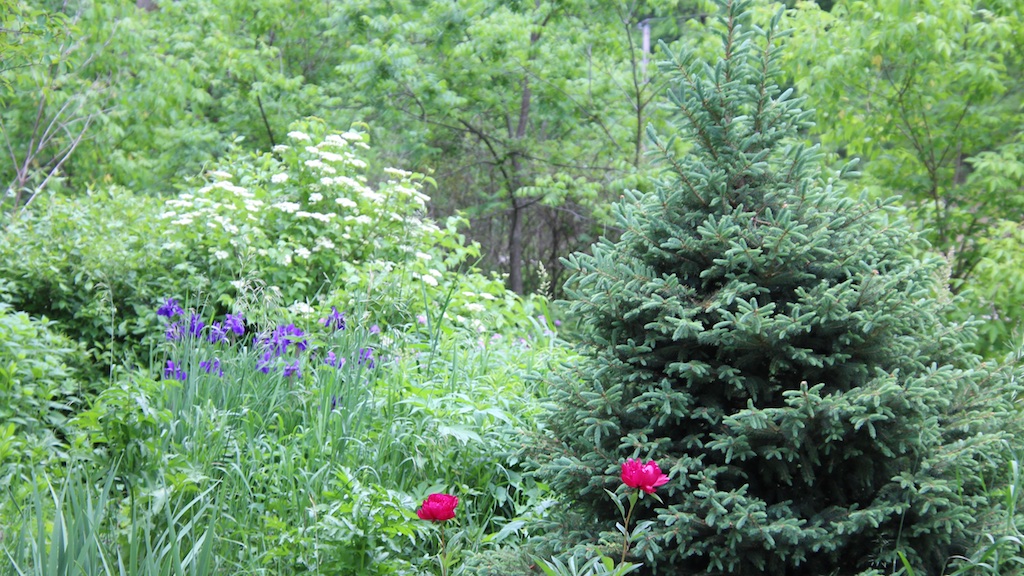