Welcome to an ongoing inquiry about the behavior of people and dogs.
Blog Home >> Death of a Pet >> A Gift of a Book

Gail Caldwell’s new book, Let’s Take the Long Way Home, is nothing short of exquisite. It is a book for anyone who has had and lost a soul mate best friend, for anyone bonded to another by their love of dogs, or their need for another who understands them without explanation. It is a love story in a way, a memorial to Gail’s friendship with a brilliant writer named Caroline Knapp, who most of the world knows through her book Drinking: A Love Story, and dog lovers like us know from her last book, Pack of Two.

Gail’s writing is so spare and honest and pure that I read the book non-stop, bleary-eyed at 3 in the morning, tears streaming because after Gail and Caroline find each other — two single women writers who shared living alone, having similar boyfriends (the same one sequentially at one point), being professional writers and battling alcoholism in earlier years — Caroline died of lung cancer. As Gail writes: “It’s an old, old story: I had a friend and we shared everything, and then she died and we shared that too.”

Full disclosure: I know Gail, and although I have only met her once, long after Caroline had died, we connected in seconds, old friends like comfy bathrobes on cool fall mornings. I had first seen her at a Book Fair in Florida, saw her speak on a panel and liked what I heard, bought her book A Strong West Wind and read it over a solitary dinner at the hotel, picked up and carried along by her words with such force I could barely eat. In the book’s acknowledgments she mentioned Caroline, and since I had just written in For the Love of a Dog that Caroline’s book Pack of Two was the best book on a relationship between a person and a dog I’d ever read, I was interested in the connection. Months later I found the nerve to write Gail, a Pulitzer winning writer, to tell how much I’d liked her book, and how much I had liked Caroline’s.  She wrote back that she was the best friend in the story, that she and Caroline had spent their afternoons walking their dogs together, talking about all the things true friends talk about, often with the dogs at the center. Later I was able to visit Gail in Boston, and meet her dog Clementine, heard how she had survived a horrific attack by another dog, and talked to Gail about the impossibility of life without our soul mate dogs, much less our soul mate human friends.

And so, I am not objective. But here’s what others say about the book:

“Stunning . . . a book of such crystalline truth that it makes the heart ache.” (Boston Globe)

“Caldwell (A Strong West Wind) has managed to do the inexpressible in this quiet, fierce work: create a memorable offering of love to her best friend, Caroline Knapp, the writer . . . who died of lung cancer at age 42 in 2002.” (Publisher’s Weekly)

This book is not about dogs, but Gail and Caroline’s love of dogs is central to the theme, as is their swimming, sculling and battle against alcoholism. It is also a lesson, pure and simple, about the power of language, and how very beautiful and powerful it can be.

MEANWHILE, back on the farm: Finally, it cooled off, cooler temperatures, lower humidity. Ahhhhh. Willie and I have worked sheep every morning.  Things with Willie and Hope are complicated, too much so for me to write about them now, but I will at length early next week (and yes yes, answer your questions about what I am doing about their reactivity.)

Here’s a photo from a walk we took today, a bunch’o dogs and a bunch’o friends, what a joy. Most of the dogs were out of the picture, but they were all Black and White (but not all BC’s.. we call it the Domino Group). 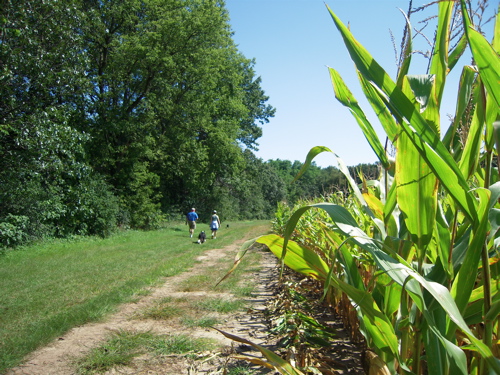 « One Step Forward, Several Steps Back
Update on Hope »