Welcome to an ongoing inquiry about the behavior of people and dogs.
Blog Home >> Animals and the People Who Love Them >> A Wolf Called Romeo

Just a quick note: I was lucky enough to get a pre-pub copy of a book titled A Wolf Called Romeo by Nick Jans and can’t recommend it highly enough. I  just heard that it is now officially out, and I suggest that you drop what you are doing and order it right now.

It’s about a wolf who appeared one day outside of Juneau, and began a six-year odyssey of relationships with local dogs, curious onlookers, the predictable wolf haters and those who understood enough biology to be both riveted and worried about what might eventually happen.

Nick Jans was one of the first people to spot the wolf; that’s his dog on the cover, during the wolf and dog’s first meeting when Jans was sure his dog was about to die. Instead, Romeo began a unique and compelling relationship with local dogs, authorities and wolf detractors, all beautifully described by Jans. I really couldn’t put this book down, and finished it early into the wee hours, fascinated by the story, drawn in by the writing and Jans’ thoughtful approach that encapsulates everything there is to say about our complicated and contradictory relationship with wild animals. It is one of my favorite books of the year. 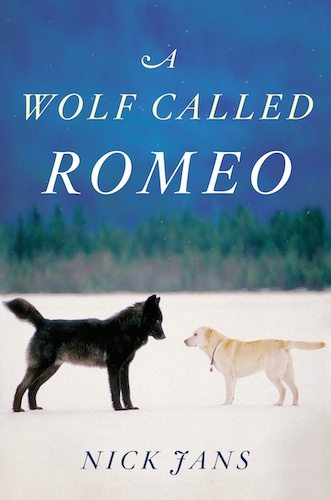