Welcome to an ongoing inquiry about the behavior of people and dogs.
Blog Home >> Dog Behavior >> Aggressively Obsequious?

A recent comment from blog readers brought up a fascinating issue. I’ll just introduce it here, and then continue delving into it as time goes on. Here’s the question: Is it possible that dogs who appear to be super submissive are, uh…, not? I think the answer is yes. I say ‘yes’ because I think there’s a difference between a dog being “submissive,” in the sense of not needing to be high up in the social hierarchy, and dogs who perform “submissive displays” enthusiastically.

I had a female BC once, Bess, who was a classic high status bitch. She never fought, but she did take her toy over to a visiting female once, put it down on the ground between the two of them, and then trounce the visitor for starting to sniff it. (Those of you who have attended my seminars know that this is when I learned why “bitch” is a dirty word. I remember watching, relatively new to dogs at the time, and blurting out “YOU BITCH!” as it happened.) Most visiting dogs took one look at “Queen Bess” I called her, with her high posture and regal bearing and tiara of confidence, made some canine equivalent of a curtsy, and that was that.

But one day a visiting Husky female strode up to Bess like she owned the world, and Bess immediately threw herself on the ground in a classic “passive submission” display (I know they’re lying down, but it still doesn’t seem very ‘passive’ to me when they throw themselves on the ground!). I don’t think I’ve ever seen a display so extreme: Bess flattened herself, plastered her forelegs together and her ears to her skull, and grinned like an idiot. Soon she got up and began “active submission,” licking and groveling with such vigor that we all started laughing. It was the most “submissive” of submissions, but it was so extreme it seemed as assertive as it did submissive.

I once had a university student who did something similar to me, and that’s when I coined the phrase “aggressively obsequious.” He came up after lecture, head bobbing, pushing himself into my face while grinning like a fool, and asked, between excessive words of praise, if I’d repeat my lectures in full for him after class over tea. Well, no, I wouldn’t. But here he was, asking something ridiculous of me (from, I suspect, a sense of entitlement), but using a vigorous display of submission to take the edge off.

Ever sense then I’ve noticed dogs whose “submissive’ behaviors are down right rude… lick-lick-lick in your face-face-face non stop-stop-stop. I’d love to hear more from you about this. Do you know what I mean? Those submissive dogs who are doing all the ‘right’ things, except so excessively that it no longer seems submissive at all. Have you ever had a dog like that?

Meanwhile, back at the farm: The days here are alternating between blue sky-sun-bright colors and grey-rainy-windy. It’s been almost every other day of that lately. The sun feels so sweet, and the mud so thick . . . It’s too wet now to plant the last of the daffodils I bought, here’s hoping it’ll dry off enough to get them in. It’s more of a pain to plant bulbs than you might imagine (if you live on a farm that is mostly red clay and the chipmunks and squirrels try to dig them up faster than you plant them), but the pay off in spring is worth it. It turns out that critters don’t like daffodils, so I plant my favorite flowers, tulips, surrounded by daffs and a few other species that aren’t so tasty.

Lassie and Will are doing well. The focus at the farm right now is on nutrition for the market lambs (we go to market next week, always a sobering day for me) and for the breeding ewes. Redford the studly ram returns next week, I can’t wait to see him again, I’ve missed him. Rams have an entirely different personality than ewes and I especially like Redford’s. He grew up in pens with other young rams, and I fear he’ll miss his buddy at my friends, but for a few weeks I suspect the ewes will keep him busy. 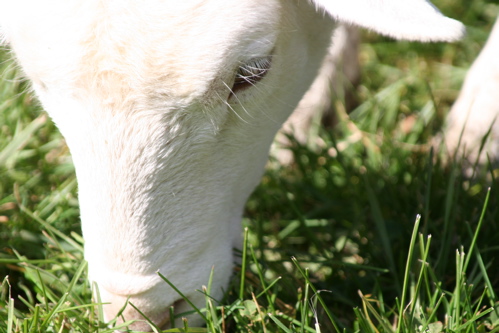 There’s no fence around this grass, but Willie is so reliable that I am 100% comfortable letting the sheep out on the front lawn (the one by the road) as Will and I watch over them. Will loved doing this last year; mostly it consists of flank one way or the other, then lie down and wait. Then flank, lie down and wait. Rinse and repeat. I think he liked it because it involved no pressure–little close contact with the sheep, little pressure. But now he seems bored by it. He truly, be still my heart, seems to be coming into his own as a working dog. He loves driving, loves holding the sheep off feeders for me, staring them down face to face, and seems to love being right on the edge of contact with them. This is a great thing, watching him take charge with confidence and finesse… it’s such a joy to watch him mature.

Don’t get me wrong. Will is still Will. He is still hyper reactive to sound (turn the page of your book? Will leaps up..), herds Sushi relentlessly ( this is not a minor issue!), would never be safe to take to a dog park, etc etc etc…. He is definitely still my ‘problem’ dog; and yet, oh oh, look at that face! 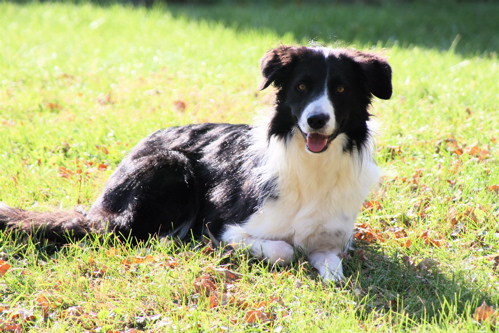 « Muzzle Punches, Air Snaps and Tooth Clatters Revisited
Who Are We to Dogs? »