Welcome to an ongoing inquiry about the behavior of people and dogs.
Blog Home >> Dog Behavior >> Ah Youth! The Initiation of Play in Dogs

First, watch the video of Katie’s young Leo trying to get an older Mastiff, Herk, to play. (You’ll know who is who, trust me!)

Second, take a minute to wipe the tears from your eyes because you were laughing so hard.

Third, think about all the ways you’ve seen dogs try to initiate play with other dogs, from a standard and obvious play bow, to Leo’s method of smashing a toy into another dog’s head. I find the topic of how dogs convince other dogs to play an interesting one. How do dogs go about initiating play in others that are a tad reluctant? I’m especially interested in Leo’s use of a toy (tool?) to get Herk’s attention.

How common is it for a dog to use an object to elicit play from other dogs? Willie’s favorite method of play is “Let’s be race horses!” but he also loves to play Keep Away. He and an age-matched Aussie used to play Keep Away relentlessly. One dog would pick up a stick and run toward the other dog. It may be anthropomorphic, but I can find no other word to describe the behavior as “flaunting.” Once the other dog was engaged, the game began, best described as “Catch Me If You Can.” Willie was brilliant at seducing others to try to get the toy, and then turn his head at the last instant to prevent the dog from snatching the object out of his mouth. Of course, sometimes the other dog got the toy, and then it was Willie’s job to try to race up to him and get a hold of it. The owners and I watched carefully to be sure that neither dog got too aroused or snippy about the competition. Willie was relatively young when he played this game, mid to late adolescence, and he hasn’t had seen his play buddies in quite a while. I wonder if he would play the same way now that he is older? Perhaps when Willie recovers I can find out.

What about you? I would love to hear your experience with toys as an object of mutual play, but especially the use of a toy to initiate play from another dog. Does your dog use toys to initiate play with another dog? Do you see others do it, and with what success? Of course, most of us are used to our dogs bringing us toys to fling, throw or play tug with, but I suspect it is less common dog to dog. What do you think? (And, if you like debates on the same level of angels on pin heads… if a dog uses a toy to get another to play, is the toy then correctly classified as a tool?)

Alas, Leo’s method wasn’t successful yesterday, but today Herk was in the mood.  Here’s a photo of Katie’s Lily, Leo and Herk after a vigorous play session in the back yard. 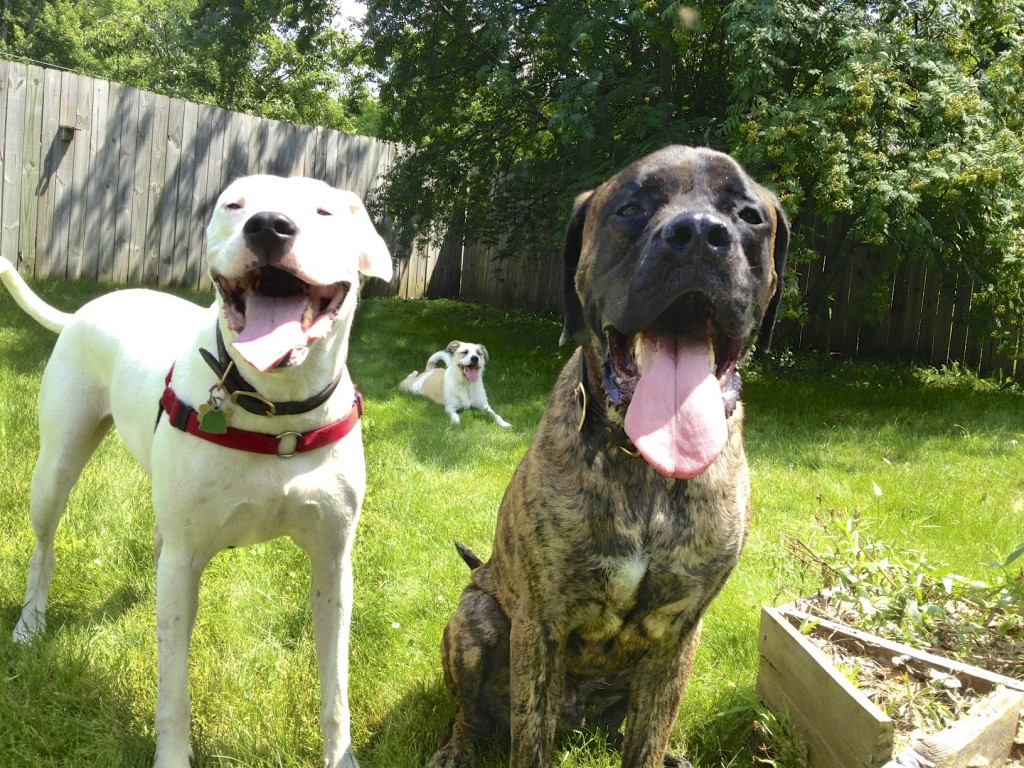 MEANWHILE, back on the farm. I won’t know definitively until next Monday, but it looks to me like Willie is improving. Yeah! He appears to put equal weight on both hind legs when rising from a down, which he wasn’t before. Yeah again! We tweaked his management plan (even more crate time -sigh, rubber runners on all the hardwood floors, lots more training to do everything in slow motion), added some more exercises and began laser treatments in a nearby veterinary clinic. (Thanks to FB friends for helping me find laser therapy close to home!) Of course, his Physical Therapist reminds me every time I see her that just one leap/spurt/lunge forward can set him back to zero, so who knows how he’ll be tomorrow, but right now I’m focusing on HE’S BETTER! (Did I mention YEAH?!)

Besides Willie’s PT and management (for which I am forced to lie down on the floor with him every evening for at least an hour and rub his belly while watching television, poor me!) it feels crazy busy out in the country. Besides tons of gardening and pasture maintenance, Jim and I spent much of last weekend putting summer’s bounty into the freezer. And our mouths. We picked buckets and buckets of strawberries and sour cherries in the yards of generous neighbors and spent hours cleaning and preparing them for the freezer. Strawberries are like jewels to me, so beautiful and so yummy.  They keep me sane during the dark, monochrome winter. 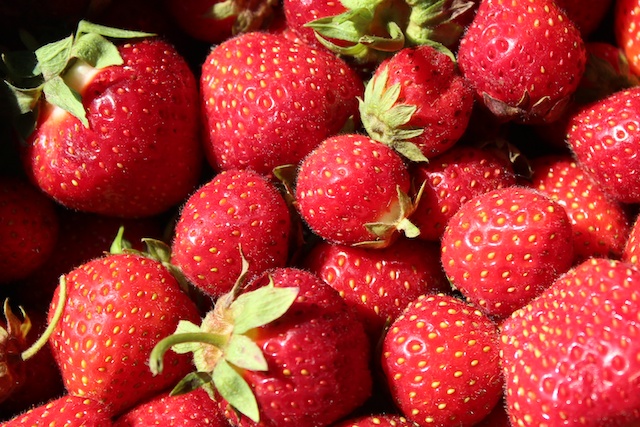 Our CSA is providing us with turnips and chard and escarole and three kinds of lettuce and sweet, young onions and broccoli and and and… I can barely keep up. Made some home-made shortcake biscuits and we’ve been eating strawberry shortcake all week. Here’s what is left of a chard pie I made Tuesday night with the chard, spring onions and some lovely Parmesan cheese I bought last week. Yum. 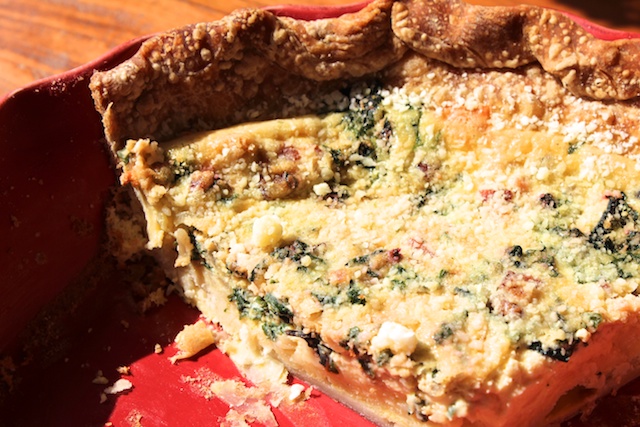 Thank heavens there is a lot to do in the garden, because otherwise my food consumption and time spent lying around with Willie would require an entirely new wardrobe. After truly hateful weather–so hot and humid I could barely put one foot in front of the other–we got a break and it’s lovely here again. Lovely that is, except for the mosquitoes, whose numbers are now approximately as high as the number of oxygen molecules in the air. I hope the weather is good, if not tolerable where you are.

« The Tragedy of Wolf Dogs
Dogs As Family, People As Packs »