Welcome to an ongoing inquiry about the behavior of people and dogs.
Blog Home >> Animals and the People Who Love Them >> All “Incompatible Behaviors” are not Equal

Yeah well, this is something I know well, except, uh… how come it took me 2 years to figure it out with my own dog? Sigh.

Here’s the back story: As many of you know, my 3 year old BC, Willie, is both a joy and a challenge. He’s joyful, incredibly responsive, the perfect dog for me to work on sheep, so reliable when working that I can let the sheep graze by the road, smart, fast and handsome.

* Developed, also early on, a serious dog-dog aggression problem (partially treated and partially managed; plays with lots of other dogs, makes good, reliable decisions to keep himself out of trouble, but not a candidate for a dog park).

* Was so hyper sound-sensitive as a pup that I couldn’t take him out much (now better but far from “normal,” will sometimes leap up out of a sound sleep if you turn the page of a book).

* Exhibited Possession-related aggression even as a 9 week old pup: went after an adult dog over food on the kitchen floor at 9 weeks of age. (Now 95% treated, no growls or tooth displays to another dog in 2 and a half years, though he will body block another dog from his play mate or pets from people until I notice and suggest he mind his manners.)

* And (and here’s the topic of today’s blog… took me long enough, hey?), incessantly herds Sushi, my cat.

This last issue has been the hardest one for me to deal with, without question. If you’ve never seen a “strong-eyed Border Collie” herding a cat, then it’s hard to imagine how frustrating and tiring it is. But trust me, it’s exhausting. Not only is it harassing to the cat (Sushi hates it), but if I let it go he works his way up to nipping at her. This is not something that can be ignored, and if unmanaged, it would happen 100% of the time that Will and Sushi were in the house together. He has even taken to waiting at the window, in what can only be described as BC-typical obsessive insanity, just in case Sushi shows up on the porch.

I’ve had 12 BC’s and only 2 of them have stalked the cat as if it were a small, furry hoofed animal. In both cases, Willie and a dog named Scott, the dogs are “strong-eyed” BC’s, meaning that their inherent response to anything that they define as “livestock” or “herdable” is to lock up in a stalking posture, complete with a laser-like stare that can’t be broken. Think “Stalking-Border-Collie-on-Drugs”. Strong-eyed dogs can be a problem when herding sheep too. They get partway around the sheep on an outrun, make eye contact with the lead ewe and bang, they’re transfixed and immobile.

I’ve worked this through (most of the time) on sheep, but I’ve struggled mightily at home with Willie and Sushi. I’ve tried using a look at the cat to lead to another, much loved behavior (looking at cat leads to play with favorite toy).. that just made it worse. I used a clicker to put stalking on cue, and a clicker to teach him to stop stalking. No luck. I’ve tried teaching “Lie Down” every time you look at the cat… that leads to a tense face, flat ears and tongue flicks. I tried teaching him “Watch” so that he looks at me when he looks at the cat and reinforcing it with a tug game. That method was fantastically successful at turning his extreme fear of unfamiliar dogs into happy anticipation. But it didn’t help for this.

After trying all of the above with no success, I tried corrections, in this case verbal “no’s” which Will had been taught originally as a circus trick. They were taught to mean “Please stop doing that, turn away and look at me.” However, given a serious case of “I’m only human,” they began to turn into an expression of frustration, somewhere around the 27th time in one hour that I had to call him off the cat. Needless to say, I dropped that method because it made things worse for both of us. Of course we know that in this kind of situation, positive punishment only works if it is intense enough. And so, I tried a citronella collar, which freaked out the cat and Willie both, in a cartoonish but ineffectual kind of way. I put it away.

Trust me, this is not an easy behavior to turn around. Herding is not just something he loves, it is something he has minimal control over. Yes, he can lie down when told, back up when told, on sheep, etc, but he can’t switch off wanting to herd animals, he can’t stop being a strong-eyed Border collie, and he can’t stop defining the cat as something to be herded. It truly seems involuntary.

Add this on to the fact that all my allergies are getting worse, including the ones to my cat, and it’s made life for Sushi less than ideal. I’ve been wracking my brain about what to do about Willie and Sushi, well aware that I haven’t been handling it well enough.. It’s not much of a problem in summer, because Sushi is outside so much, but it’s getting colder and she’s inside more often. It’s less of a problem for house sitters, because Wilie is the worst when he’s actively working sheep. The more he works sheep, the more he wants to work Sushi. And that only happens when I’m home. (I hoped when it first began, around 8 months of age, that it would go away when he started working sheep regularly. Au contraire, it got much worse.)

Three days ago it occurred to me that I had neglected to try the the simplest of solutions. I’m afraid to say much about how Method #437 (it feels like) is working, because it’s too soon to say how much it will help. But, oh please, please, cross all your paws. It’s going well so far, all three days of it. (Deep breath.)

Here’s what we’re trying: Whenever Willie looks at the cat with his head even slightly lowered (as if stalking), Jim or I cheerfully ask him to “Sit.” Sitting is not a posture one adopts when one is herding livestock. (Which lying down is, and it seems obvious that I never should have tried that in the first place.) Ironically, sitting IS a posture Willie first used around sheep. Often when I’d ask him to lie down, he’d sit down instead. He did it so often that I actually asked a clinic instructor if he thought it was a problem and whether a judge at a trial would take off for it. He said “Well, you don’t want to see a dog doing it…” and I understand why. A sitting BC doesn’t look like he’s working. He looks downright douffy. I believe that Willie did it when he was unsure of how to behave around the sheep. As he matured, he became less and less likely to adapt a sitting posture, and his stalking posture became more committed, and more intense as he gained confidence. If you analyze it, it’s another form of positive punishment (I add something to decrease the frequency of a behavior), but it is only mildly aversive to Willie (he sits with an open mouth and relaxed body, looking mildly confused rather than stressed). It’s said in an upbeat tone, and he’s had years of positive reinforcement for sitting when asked. Most importantly, it feels pleasant for both of us, and it takes him out of herding mode without reinforcing him for stalking (as I suspect all the positive reinforcement did.)

Viola. . . Maybe? The perfect incompatible behavior to link to stalking the cat? Look at the cat and you’ll end up sitting down. That takes him out of herding mode, takes all the tension away (one hopes) and MAY help. It’s only day 3, and it’ll be 3 weeks before I really get a good idea of whether this is going to help. It’s hard to say: Willie doesn’t just herd the cat, I truly believe that it feels vitally important to control her every movement. (Personally, I think he hates her guts, and vice versa.)

I bring this up here for two reasons. One is the importance of finding the RIGHT incompatible behavior to replace a problematic one. Replacing one behavior with an appropriate one is a cornerstone of much of the work I do… and I’ve always said you have to find the right behavior. Here’s hoping that this is an example.

Secondly, this is hereby an official reminder that folks who write popular, well-received books 🙂 put their pants on one leg at a time, and can be just as slow as anyone else to solve their own problems. As tempting as it is (and it is, honest) to keep this issue private, I have always believed that the really great trainers and teachers are the ones who aren’t afraid of being human, and aren’t afraid to be honest when they screw up. I’m always relieved when someone I admire admits to not being perfect (as I often imagine them), and I’m gratified when a client says “Oh I’m so glad I’m not the only one these things happen to,” after I tell a story on myself.

I’ll keep you posted on the rest of this particular story. Sushi may have to find another home because of my allergies, but I sure would like to solve this last serious behavioral problems of Willie’s. . . (before the next one crops up!) That may not be possible; I know plenty of people who work their BC’s on sheep or cattle who have that one special Border collie who just can’t leave the cat alone. I’ve asked many of them what they’ve done. I’ve heard “beat the crap out of the dog” and “kick the cat outdoors” and “grin and bear it,” but I’ve yet to talk to someone who had “one of THOSE BC’s” who got it turned around. Keep in mind, this isn’t all BC’s… Luke, Lassie, Pippy, Drift, etc, never did it once. Cross your paws for me.

Predictably, I couldn’t get a great picture of Willie in full stalk. As soon as I approached with the camera he changed his behavior (thus, proving “McConnell”s Law” which states that if you want to eliminate a behavioral problem, carry around a camera and try to record it). But here he is watching Sushi as she looks out the window. 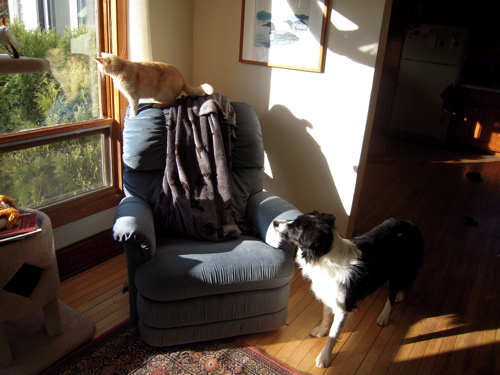 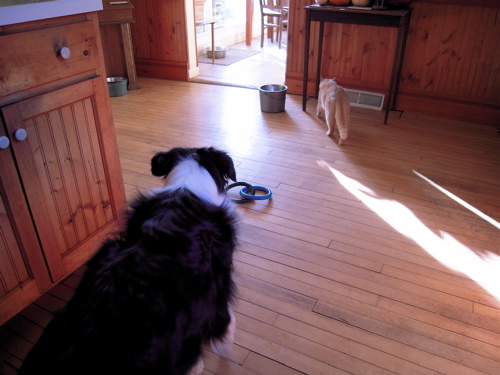 I guess I should just take my own advice and carry a video camera around at home . . .