Welcome to an ongoing inquiry about the behavior of people and dogs.
Blog Home >> Animals >> Anger & Anger Management

CAN DOGS GET ANGRY? Yup, I’m here to say that they can. Do they get angry as often as humans? Nope, and thank heavens for that. If they did, I doubt we’d live with them, given that they have carpet knives in their mouths. Just like people, they vary tremendously in how often they experience or express anger. I’ve known some dogs who appeared not to have an angry moment their entire lives. More commonly, I’ve worked with dogs who, on occasion, are clearly frustrated at not getting what they wanted or expected. And rarely, I’ve worked with a small number of dogs who appeared to live in a state of ‘road rage’ for weeks, months or years on end. So even though I would never say that anger in dogs is an exact replica of anger in people, both in its frequency and how we experience it, it is a basic biological fact that dogs are capable of experiencing anger. Here’s why:

Anger is as primal an emotion as fear, and if an animal can experience fear, then one is wise to assume it is capable of experiencing anger. The two, it turns out, go hand in hand. Both are mediated primarily in the amygdala and both evolved to protect us. Fear is the emotion that signals the body that it is in danger, and motivates us to take some kind of action to protect ourselves. Anger is the emotion that backs up fear when being on defense is not enough. Roger Abrantes tells a compelling story of when he was about to be in hand-to-hand combat as a young soldier. As he stood in a trench, watching the enemy soldiers run toward him with bayonets drawn, he was initially terrified. But at the last minute, just as the soldiers were within a few feet of him, he was overwhelmed with a burst of rage. That’s the emotion that poured energy into his body and allowed him to move forward to fight for his life.

That’s what anger does: it floods the body with energy, increases the heart rate, pumps blood into our muscles in preparation for action. Anger demands action; that’s why it can be so problematic. Have you ever done something you wish you hadn’t when you were angry?  If not, please consider either offering life coaching sessions for the rest of us, or ask your parents if you actually are an alien. Anger, at varying intensities, compels us to do SOMETHING, anything, and thus… we sometimes do something we shouldn’t and get ourselves in hot water until we learn to take a breath and let our emotions settle. The same thing can happen to dogs. If you’re interested in following this thread, I write more about the biology of emotion in For the Love of a Dog.

Dogs have all the same wiring (and external expressions) related to anger as people. They just, as I said, don’t seem to experience it as often as we easily-angered primates do. (Ever seen chimps lose their tempers? It’s common, and it’s not pretty.) Of course, like all emotions, dogs exhibit a vast range of intensities of experiencing anger, from being slightly irritated, to being truly frustrated, to downright mad to being in an out-of-control rage. All of those are manifestations of anger, just at different levels, and all are within a dog’s capability.  Of course, dogs don’t have the same complexity of cognitive overlays as we do; their experience of anger has got to be different in many ways than ours. But that doesn’t mean that we don’t share the basic, fundamental emotion of anger. As I’ve said before, glass half empty or glass half full, both are equally accurate.

Here’s a photo of a dog illustrating what I claim is an angry emotion. Note the furrowed brow, the offensive pucker and the hard stare. Any one of those things by themselves would not be enough to suggest an internal emotion of anger, but without the fur and black nose, this is exactly the face of an angry person. 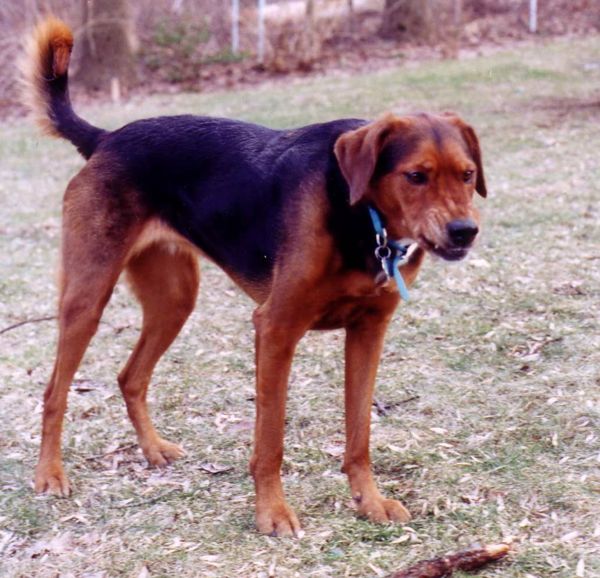 Dogs need to be taught to be patient and polite (the basis of the Feeling Outnumbered program), and we need to learn to take a breath, or two or twenty, before expressing anger or frustration at our dogs. I needed this advice just recently: until recently Willie had stopped harassing Sushi with his obsessive indoor herding, but after his long, long period of inactivity and Sushi now being inside more because of the weather, the problem cropped up again. I found myself starting to get truly frustrated about it, until I put on my behaviorist/trainer hat, took a breath and put Willie in his crate when I found myself unable to do anything constructive. (Things are improving again, whew.)

I’d love to hear your thoughts: How do you interpret the dog above? What are your best coping strategies for dealing with your own frustrations, and helping your dog through his or hers? Never happens at your house? Ever? Really? Wow. Can I come over?

MEANWHILE, back on the farm. Well, two steps forward physically, and four back behaviorally. Willie’s shoulder is doing well, really well.  As I said earlier, I’ve adjusted to a new normal, and have accepted that his shoulder will never be sound, but given that, he’s doing really well. He can play with his current favorite toy (Flappy) without any sign of regression, so that’s just heaven for both of us. However, last week he literally peed his pants (okay, he didn’t have any on, but you get the idea), barking in terror at a man he didn’t expect, standing in the kitchen. Granted the guy is tall, has hair like Einstein and was standing stock, staring, but still… Willie has never, ever reacted to a person like that. He became somewhat nervous around unfamiliar men when he was an adolescent, but it was easily countered by having guys throw ball for him every time we could arrange it. Willie has always adored people, guys especially, but as you may know, has had a lot of fears over the years, but primarily toward other dogs. A few days later another man came over. I asked him to sit down before I let Willie out. Willie didn’t bark as he did before, but he was clearly frightened of the man (who he’s seen at least 15 times over the years and always been fine with.)

I’ll write next time about the factors that could be contributing to his behavior (our hermit-like existence after his injury clearly being one of them, but I doubt that it’s the only one). There are at least 4, maybe 5 I can think of… I’ll discuss them, and our treatment program, in the next post.

Here are the noses of Barbie (on the left) and Butterscotch, one of the ewe lambs we’ve kept from this year’s breeding. It looks as though she did get bred by King Charles, so stay tuned to see if we have a teen0-aged pregnancy (that’s a good thing in sheep). The sheep must be loving the cool but not cold weather; who knows though, maybe they are yearning for snow? 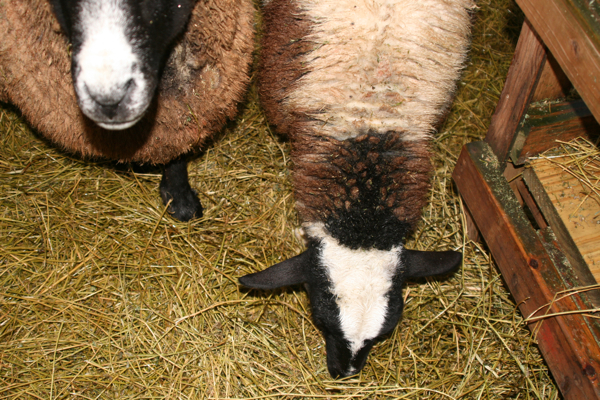