Welcome to an ongoing inquiry about the behavior of people and dogs.
Blog Home >> Dog Behavior >> Are Males and Females Different to Train Part 2

Well, so far there have been 40 comments on this question, and what interesting ones they have been. I’m going to summarize what folks have said so far (and also am sending this question out to a list of Certified Applied Animal Behaviorists and some professional trainers in different fields. If you are on any lists you think might be appropriate, please send this question out and ask them to comment. . . ) I am SO interested in the comments so far.

Of course, you can read the comments for yourself, but here are some trends. (Keep in mind that this question was not sent out as a survey, so not everyone answered the same question.) 11 people explicitly said that other factors like age, personality and training were far more relevant than sex (or simply, “No: one is no easier to train than the other). 5 people explicitly said that the sexes were “different, but neither was necessarily ‘easier or harder than the other.'” 5 (or was it 6?) people said that in their experience, females were easier to train, while 9 people said that males were easier to train. Here’s list of some of the comments:

Interesting, hey? What stands to me are two things: Lots of people volunteered that they think females are “smarter.” Many people mentioned that they thought that females matures faster than males. Do we know that to be true? That female dogs mature physically and/or cognitively and/or emotionally faster than males? (It is indeed true in humans, but do we know that for a fact in dogs? I’m sending this out to my veterinarian friends…) I also wonder about the difference in human ‘training’ (usually called “school!”) that makes it clear that girls do better in certain types of academic situations than males. Is it possible that some people think female dogs are “smarter” because of the way we train?

I should note here that many of the comments carefully noted that the writer could only look to his or her experience… sometimes with many dogs, sometimes with a small number. I appreciate how thoughtful many of you have been, thank you so much for your comments.

I find myself thinking of my own dogs in relation to that question… the two most “stubborn” dogs I’ve had were male and female (Drift and Bess) while the two most ‘biddable’ were also both male and female (Willie and Lassie). I find myself thinking about what goes into the label of “trainable…” What does that mean, after all? Smart, as in quick to put two things together? Biddable, as in do what you ask when you ask it? Skilled at a particular task so that they look like they learn fast? Emotionally mature enough to focus on a lesson rather than be distracted by the environment or internal anxiety? Quick to learn, or consistent once having learned? There are so many things that are relevant when the question is asked, it is almost unanswerable in a way, isn’t it? I’m reminded of the works about human behavior that talk about “social intelligence’ versus ’emotional intelligence’ versus inherent skill. (Not to mention the effect of the environment. Have you read Malcolm Gladwell’s Outliers yet about what ‘makes’ people super successful? It’s fantastic! Boy will it motivate you to practice practice practice if you want to be a good dog trainer!)

To be continued… keep up your comments, they are fascinating. I’ll pick this up again after I’ve hear from more of you.

Meawhile, back at the farm: Here’s a photo of some of the Vermont Vixen’s savoring our monthly brunch (that’s Vermont Valley west of Madison WI, not the state of Vermont!) and Brittany Spears the hefty ewe making a pig of herself at the feeder (okay, we’re all eating!) 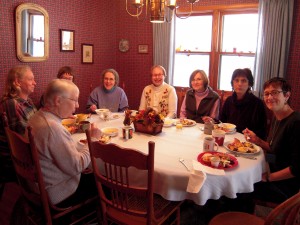 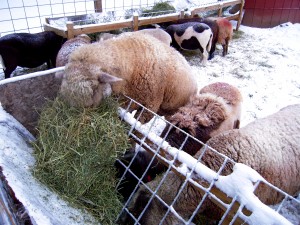 « The Human/Animal Bond, Can Dogs Get Angry?
Alex and Me; Animal Intelligence and “Thinking” in Animals »