Welcome to an ongoing inquiry about the behavior of people and dogs.
Blog Home >> Dog Training >> Are Military Dogs “Equipment” or “Members”?

Here’s a political issue I’m happy to discuss on the blog: The classification and treatment of dogs in the American Military. Dog lovers may or may not support the use of dogs in the military, but I can’t imagine anyone not in support of working dogs being treated well after their service is over. We, in this country anyway, have all heard the horror stories of dogs in Viet Nam being abandoned or shot, and that just can’t happen anymore. Ever.

I know that things have improved, but pure and simply, not enough.  A big part of the problem is that dogs are now categorized as “equipment” rather than the living, sentient beings that they are. This makes it difficult not only to transport dogs back home after their service, but almost impossible to release money to fund veterinary care for their medical problems, many of which are a result of their work for the country.

Many of the working dogs are trained at Lackland Air Force Base in Texas, which has a new veterinary hospital for the dogs in training. I have been told that there are several dogs there that have returned from war zones with PTSD-like symptoms, but it’s not clear to me how often the clinic treats dogs after they return, rather than vetting them for health problems before they are sent off to work.

Currently there is a bill in congress to re-classify military dogs as “members,” rather than as “equipment.” It’s called, appropriately enough, the Canine Members of the Armed Forces Act, S. 2134, and was introduced by Senator Richard Blumenthal from Connecticut. Yeah for him. Apparently the House of Representatives is “moving forward” on the bill, and it will be discussed by the Senate soon. The ASPCA advocacy center has a great website to help us contact our own Senators and advocate for the bill. I just did it myself, it only takes a minute.

If you are so motivated, here is my unsolicited advice about what to say: Be clear and concise, and be very cautious about adding comments relating to any other issue. “Kitchen sinking” never works. For example, if you are completely opposed to using dogs in the military, save that for another email and another time. That is a reasonable and defensible position, but bringing it up in this communication dilutes the issue. Keep your language compelling but logical, and avoid unprofessional language. The angrier and more emotional one sounds, the less you will be listened to, that’s just the way it is. The more you sound thoughtful and objective, the more impact you will have. If you know me, you know that I wear my emotions on my sleeve (and my face, and my shirt front and back collar), so when I say you are better off in this situation to be logical and professional (and thus “unemotional”  ARGH, I hate that word… she said emotionally), the more the impact. I’m just saying.

Given that Memorial Day is upcoming in the states, a day when we honor the service of our military, this is the time to get this bill passed. I hope you take advantage of the ASPCA’s easy form (just type in your zip code and the program automatically sends it to your Senators) and advocate for this important bill.

I’d love to hear: Who out there knows any working dogs in the military? Worked with any or seen them work while you were in service? Please share your experiences, it would be so valuable. And you might be interested in these books written about working dogs, including Sergeant Rex: The Unbreakable Bond Between a Marine and His Military Working Dog, The Dogs of War: The Courage, Love and Loyalty of Military Working Dogs and Soldier Dogs, The Untold Story of America’s Canine Heroes. I have some on order, anyone read any of them yet?

MEANWHILE, back on the farm: Picture me saying “Ahhhhhhhh.”  By the time you read this, I will be about to begin three weeks of re-charging my batteries. Yup, I’m taking off from work for an entire three weeks. (I can barely imagine, actually, so it all sounds a bit theoretical at the moment.) Be assured, I’ve not deserted you; I’ve written blogs for the upcoming Fridays that will appear on schedule (and will welcome a guest blog from friend and colleague Dr. Karen London). In addition, true confessions, I’m sure I won’t be able to keep from reading your insightful comments. But, overall, I’m out of the office, off the email grid, letting the answering machine take messages and just generally kicking back. Denise, Katie and Lisa will be in the office putting the finishing touches on our new website. It’ll be great to come back and get it launched.

Lots of people have asked me where I’m going. This is my chance to remind people that positive reinforcement is defined by the receiver. That’s why my answer to where am I going is: Nowhere. Or, more accurately: Home. Cuz that’s where I long to be, and that’s what I never get enough of. I have been such a lucky woman to travel around the world meeting dog lovers and professionals in so many countries. I have loved it. And now I just need a little time to let my batteries recharge and hang out with the dogs and the sheep.

Here’s where I plan to spend some serious time for the next three weeks. For years I’ve maintained it, weeded around it, and planted flowers to create a fetching background. Now it’s time to sit down and use it. 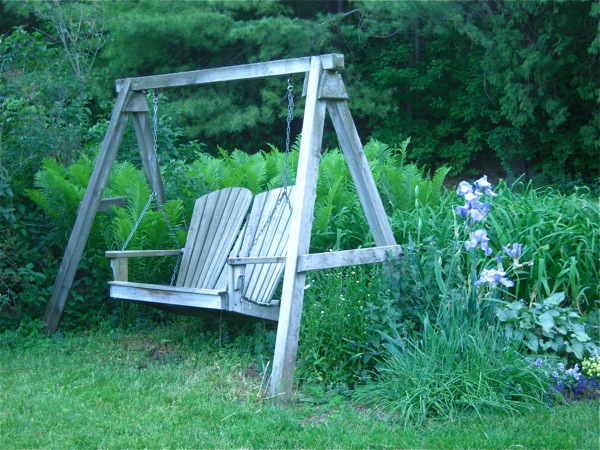