Welcome to an ongoing inquiry about the behavior of people and dogs.
Blog Home >> Animals >> Are You “All Positive?”

Recently there have been some debates and discussions about whether it is possible to be a “100% positive” trainer. This has become an issue because some seminar hosts have policies that they will not hire anyone for a seminar unless they only use positive reinforcement and “never use punishment or aversives.” Some people are being asked to sign pledges that they will never use punishment as a trainer.

I’m curious what you think. Are you a “100% positive trainer?” Do you ever use “punishment?”  Do you use what some people call “aversives”? Ever? If so, what kind and when? I’ll weigh in on this debate next week, (as you can guess I have a few opinions about the matter) but I’d love to hear what YOU think.

MEANWHILE, back on the farm: The snow is melting! It’s been well over freezing during the day all week, and as a result 1) we can actually see bare ground in some places, 2) the snow that’s left re-freezes every night so walking most places involves either teetering on a mouse-size mountain range of ice peaks and valleys, sinking into ankle deep mud, or having your boot fall through a foot of snow with a thin cover of ice on it. Let’s just say the footing is highly variable. There’s enough open ground that it’s muddy paw time here now, and I am reminded of how valuable it is to cue your dog when you are about to lift his feet. I’ve been saying “Ready” before I pick up each of Willie’s paws (I also do them in the same order) and he now lifts up 3 of his 4 paws for me when I say the word. It’s always the same one that he doesn’t pick up himself, and I suspect that it is because it is harder for him to do so. We are always working on some problems he has in his left shoulder and right hip, so I go especially slowly picking up his right hind paw, and wipe it off as fast as I can. Willie’s behavior is a great reminder to us all to be observant and thoughtful about our dog’s responses.

Besides the discovery of lots of dog poop (a universal sign of spring in snow country), I discovered something far more interesting today. I found a dead hawk below the pines lining the driveway, clearly one who had died recently. I believe it is an immature Red Tail, (Buteo jamaicensis) the most common hawk in the area.  There’s a pair that nests less than 100 yards from the farm house every year, and I wonder if it was one of their young from last year. Egg laying begins in late winter, in March or April, but I often have seen courtship begin in late February. I don’t know why the hawk died, it has no superficial injuries. The best guess (and it is only a guess) is that it starved to death. As I explained to my UW students recently, deep snow favors small rodents who can move through tunnels under the snow while staying out of sight of predators, and disfavors aerial predators like Red Tails. I wonder if the snow is melting just a few days or weeks too late for this one. I’m sorry that it died, but grateful to have a chance to appreciate its beautiful feathers. 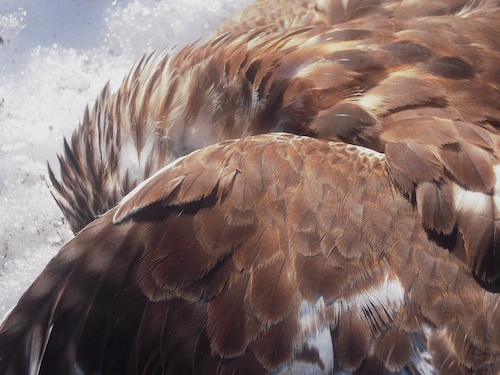 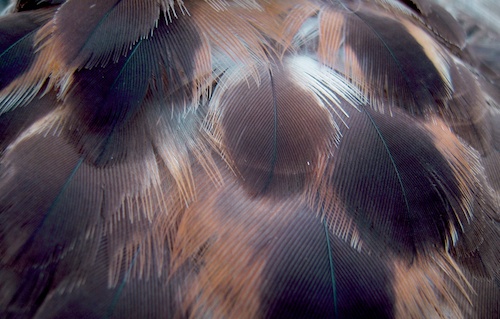