As is often the case with all of us, my agenda for today changed after a phone call that got my attention. A reporter for CNN called, and asked what I thought about an article that just came out in Emerging Infectious Diseases (the journal of the Center for Disease Control). Titled “Zoonoses in the Bedroom,” the article by B.B. Chomel and B. Sun provides a list of anecdotes and a few studies that link sleeping with pet dogs and cats with serious diseases. The same connection is made with kissing pets, and being licked by them.  They conclude by saying that “Our review suggests that persons, especially young children or immunocompromised persons, should be discouraged from sharing their bed with their pets or regularly kissing their pets. Any area licked by a pet, especially for young children or immunocompromised persons or an open wound, should be immediately washed with soap and water.”

Before I write any more, I should mention that a 100 pound dog just finished slathering my face with her saliva as her and her owner left the office for their weekend at home together. When I return home, I will let Willie kiss my face, will kiss him back repeatedly, and will later lay down on the rug with him, cuddling like spoons, while Jim and I watch the next installment of Castle.

Overall, a careful reading of the study suggests that it is heavy on anecdote and a bit light on rigorous research. For example: “In 1985, a case of meningitis caused by P. multiocida in a 60-year old housewife living in the United Kingdom was reported. She admitted to regularly kissing the family dog.” Did she also admit to kissing the family husband? The family children? The gardener? (No wait, sorry, that’s a different issue.) However, there are studies in the article that do suggest that in some cases, admittedly rare, there is a link between disease and close contact with pets. it is important for pet lovers to acknowledge that there can be risks associated with living with, and loving, our companion animals.

But there is an important point to be made here, that I stressed when I spoke with a woman named Madison Parks who will be writing an article on CNN.com sometime today. And that is that that ALL social interactions with ALL animals include a host of costs and benefits. Those risks need to be understood, and then we each need to find a way to create the best balance we can, depending upon our health and our own personal needs. Dogs and cats, birds, horses, pet rats, etc etc, can bite, can cause injuries indirectly (by tripping, for example), can create health problems related to allergies (see me raising my hand here), and act as vectors for pathogens that can cause serious health problems. Companion animals, on the other hand, have been shown in rigorous studies to boost our immune system, decrease allergies in children raised with a pet in the household, increase oxytocin levels which leads to decreased heart rates, blood pressure and levels of cortisol in the body. Those physiological changes are not minor; they can act to increase health and life span in a significant way.

But as I said earlier, ALL social interactions come with risks. If I wanted to be safer, I would get rid of my dog, cat and sheep, kick Jim out of bed and live in a sterile bubble, isolated from allergens and viral particles. But then, I’d either go crazy or shoot myself, so that doesn’t really sound so safe after all. Yes, of course, those especially whose health is compromised need to be especially careful about social interactions with their pets, but didn’t we already know that? We also need to be careful about stairs, bedroom slippers (a common cause of injury), falling off ladders, and, in my case yesterday, slamming my arthritic wrist into the corner of a table while enthusiastically illustrating to my UW class the flexibility of the human shoulder joint.  I’m a tad concerned that the article, and the press about it, will cause healthy people to worry needlessly, and worse, will cause some parents to get rid of a beloved pet and take it to a shelter while their child’s heart is broken.

Okay, you know I’m going to ask: do you sleep with, cuddle with your dog? Do you let him/her kiss you?

Madison Magazine: Here’s the good news. Madison Magazine just came out with a feature story on me and … most importantly, I do NOT have to die of shame about the photo on the cover. Remember when I mentioned that I’d just finished a studio photo shoot and how uncomfortable I am in that context? Well, the photo is okay… of course I don’t look like I want to (who ever does?) but at least I am not cringing and hey, Willie looks great!  Here’s the article and cover. The article is lovely, beautifully written,  I am grateful to them for the time and attention. The only thing I’d change if I could is that Jim is never mentioned and he’s such an important part of my life. (Not to mention Willie’s. Willie worships the ground Jim walks on. I do too, but don’t ever tell him.) But I can mention Jim when I do a live web chat for Madison Magazine on February 2nd. Send in your questions before then to Katie Vaughn at kvaughn@madisonmagazine.com and I’ll get to as many as I can.

And here’s a photo of me and my two-legged guy. I call him and Willie “my guys” and “da boys” and if the two of them could ever get out of the house to play pool together, I expect they would. This is me and Jim in New Zealand, looking like cooked lobsters after being in the sun all day. 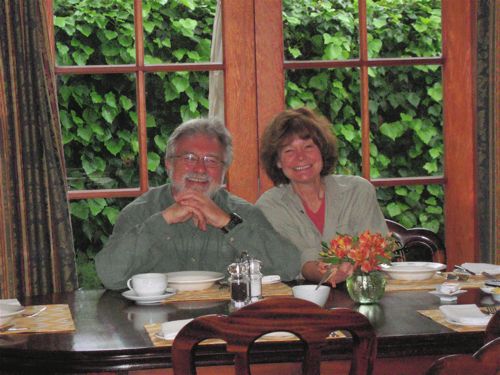 Here’s one of the photos from the Madison magazine article, taken from the web so it’s not as crisp as it should be, but I couldn’t resist. It was taken by professional photographer, Dan Bishop, who was an absolute joy to work with. He’d taken a class at Dog’s Best Friend and was unrelentingly thoughtful and courteous to Willie. I love the simplicity and clean look in this shot.

MEANWHILE, back on the farm: It was 16 below this morning at 7 am when I thought to look at the thermometer. Temperature is such a relative thing: that’s cold for here, but I know that’s not news in Fairbanks, Alaska. Little white guy seemed fine, he wasn’t shivering at all, but he was a happy boy to get his grain. We won’t be doing much outside this weekend beside exercising Willie and doing the chores. I’ve a bit of a cold and the weather is a tad below my comfort zone. But Jim and I going to play with our thousands of photographs. We both just got Mac’s version of PhotoShop, Aperature. Heaven help us. I only have over 7,500 photos to organize, and Jim has as many or more. Oh my.

« How Long Does it Take to Learn a New Habit?
The Model-Rival Method »