Welcome to an ongoing inquiry about the behavior of people and dogs.
Blog Home >> Animals and the People Who Love Them >> Book Review: The Domestic Dog, edited by James Serpell 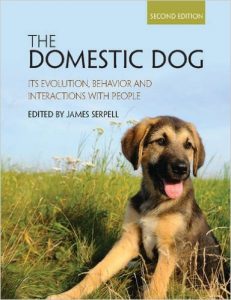 If you are a serious student of domestic dog behavior, you need this book. Its full title is The Domestic Dog: Its Evolution, Behavior and Interactions with People (2nd edition). It’s not inexpensive, but well worth it. ($44.69 on Amazon, but don’t hesitate to contact your local Indie store to see what they’d charge you.)  This is not a book I can read from beginning to end, because it’s a compilation of chapters, 20 in all, whose subjects range from the archaeological evidence of the dog’s origins to social cognition and the emotions underlying dog behavior. It is chock full of important information (the social structure of free-ranging dogs depends on resource dispersion), just plain interesting information (wolf puppies begin exploring the environment at two weeks of age, dogs not until 4 weeks) and, in a few cases, difficult to digest information (the excessive cruelty to dogs by the BaMbuti Pygmies).

I haven’t read all the chapters yet, and suspect that some of them will deserve their own article, but here are three of the notable chapters that I read this weekend:

Chapter 16, “Variation in Dog Society: Between resource dispersion and social flux,” by DW Macdonald & GM Carr. This is my favorite kind of chapter in a compendium type of book–beginning with a specific, well-designed study that then expands its findings into the social systems of domestic dogs in general. The authors compared domestic dogs living in two different environments in Italy in which resources were dispersed differently: free-ranging dogs living in the country versus free-ranging dogs living in a village. They found that village dogs led a more “fox-like” social life, living in loose social groups but spending a great deal of time alone. Free-ranging country dogs, on the other hand, lived in well-organized packs. This study also concluded that both groups of dogs were territorial, although they noted that casual observations wouldn’t make that clear.

These findings fit with decades of research in behavioral ecology that show the spatial and temporal organization of resources is a primary driver of social systems, even affecting the same individuals within the same species at different points in time. That is why I’ve never been a fan of studies from one area that are used to make generalizations about dogs in any and all environments. It is the flexibility of domestic dogs that makes them so interesting, and studies like this remind us that we need to take many factors into account when trying to understand the social systems of free-ranging domestic dogs.

Chapter 10: “Social cognition and emotions underlying dog behavior,” by F Range & Z Virányi. If you’re like a lot of us, and have struggled (in the best and most enjoyable kind of way) to keep up with the studies on canine cognition, this chapter is heaven sent. Consider this chapter a review of recent research on canine cognition, including who dogs attend to for information, whether dogs naturally imitate others (and methods on teaching them to imitate), referential communication in dogs, and the interplay between cognition and emotions. This chapter is the ultimate updated resource on social cognition in dogs, and is practically worth the price of the book.

Chapter 7: “Breed and gender differences in dog behavior,” by BL Hart & LA Hart. I’m afraid I don’t have such good things to say about this chapter. In it, Hart and Hart make three assumptions: 1) there are significant behavioral differences between breeds of dogs, 2) these differences “are reflected in the perspectives of authorities, particularly small animal veterinarians,” and 3) “the behavioral information about breed differences that exists in the minds of these authorities can be obtained by direct interview. . .”

Ask me how far I would have gotten in graduate school in zoology if I’d based my research on data about behavior that “exists in the minds” of anyone, “authority” or not. The problems with the data collected here are extensive. First, asking someone about which breeds are more likely to house soil, or be aggressive to people or dogs, is not data. It’s an opinion, which can be based on actual data, on the frequency of that breed in the population, on the interviewee’s learning, early experience, memory, social perceptions, etc. etc. Second, the authors chose small animal veterinarians because they “…”have a relatively uniform professional background, they see frequent interactions between owners and their dogs, handle dogs in hospital wards, and listen to the complaints and boastings about dogs from their owners.” But we know well that dog behavior in one context does not necessarily reflect it in others (ie, dogs in vet clinics often behave differently than at home), that people go to the vet to keep their dogs physically healthy not specifically for help with behavioral problems, and that owners don’t always accurately describe their dog’s behavior.

Data, however, does exist. One could poll veterinary behaviorists, certified applied animal behaviorists and professional dog trainers to collect data on the breeds of the dogs they saw for different behavioral problems, and compare that information with whatever knowledge can be found about breed demographics in their area. Not perfect by any means, but clearly far, far more accurate that simply asking what “exists in the minds” of small animal veterinarians.

Thus, it’s hard to know what to make of their results. Yes, it makes sense that Golden Retrievers score high on “affection to family,” but somewhat surprising that Shetland Sheepdogs have a moderate rating for “watchdog barking”.  In accordance with the work of Duffy et. al. (2008) with the C-BARQ questionnaire, they find relatively high ratings for small dogs on “aggression to family,” but also include Bichon Frises, which is counter to my best recollection of my client load. (But then, that’s back to relying on memory, so what is that worth?) If you want to learn more about breed differences in behavior, I suggest that you look to the work of Duffy, Hsu &  Serpell (2008). Granted it is based on a questionnaire, but it includes owners themselves and has a huge sample size. Here’s a line from their abstract:  Breeds with the greatest percentage of dogs exhibiting serious aggression (bites or bite attempts) toward humans included Dachshunds, Chihuahuas and Jack Russell Terriers (toward strangers and owners); Australian Cattle Dogs (toward strangers); and American Cocker Spaniels and Beagles (toward owners). This varies greatly from the results of Hart & Hart, who list Akitas, Shar Peis, Chow Chows and Rottweilers as highest on the list. What are we to make of that? Perhaps more research into the case files of people who work with behavioral problems can tell us.

With that notable exception, all else I’ve read so far in this book looks stellar. I haven’t begun to finish it, and won’t be able to take it with me to my talks in Boston and Philly (see you there?), but I’m confident it will provide inspiration for several articles to come. I’m especially looking forward to the updated chapter on the origins of the dog, one on genetic insights into dog domestication, Lockwood’s chapter on the ethology of aggression, the welfare of dogs in human care, the role of applied animal behavior, and several more chapters that relate to free ranging dogs. Can’t wait. Here, by the way, is a lovely summary of the book from Hal Herzog on his blog in Psychology Today.

What about you? Have you gotten your copy yet? What else are you reading? My nighttime fun reading at the moment is “The Paying Guests,” by Sarah Waters. Gorgeous writing, absolutely yummy.

MEANWHILE, back on the farm: I’ve been a tad under the weather, not surprising after traveling in tiny metal tubes swirling with a miasma of viral particles. I’m actually just beginning to feel human again, a good thing since I’m taking off again on Wednesday morning for Boston and Philly. I’m excited about going, and meeting lots of wonderful new people, but also admit to being equally excited to get home again and begin gardening. I have high hopes of being able to start some serious sheepdog training with Maggie, although she’s been on leash restrictions since I’ve been home due to a possible, heaven help us, torn cruciate. I’ll know more Tuesday the 21st, and will keep you posted. Please cross your paws for us.

We did manage to get out of the house for the spring flower show at Olbrich gardens in Madison. What a joyful and amazing experience! Along with the ridiculous excess of color, the show had a food-related theme. Several areas had place settings for dinner and included pie, brownies and cakes, all made of plant material. Creative and inspiring, and a balm to those of us living in the “brown period” between winter and spring. See the dinner plates on the “table” below? Those are our plates, Portmeirion’s Botanica! I love picking out which flower to give to each guest when we have company.

« How to Handle Reactive Dogs
Best cake in the world »